With a recent announcement of Bleach’s manga in its final arc, an accompanying announcement via TV Tokyo’s programming schedule has revealed that the Bleach Anime series by Studio Perriot will end its Televised run on March 27th, 2012. As of writing this post, that is around a month away.

A scan of the magazine that shows the information is below: 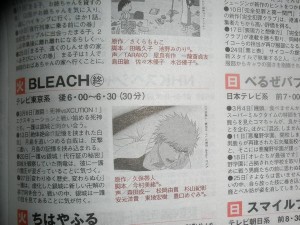 The Bleach anime began airing in 2004, and will total in with 366 episodes when it ends this year, having run for a total of 8 years.

Fans of the serious are definitely shocked by the fact that the final arc in the series is not being animated, but given that the manga and anime are about to run in parrallel soon, its not surprising that the series was intended to end at the end of the recent Full-Bring Arc. Largely regarded as the weakest story arc of the manga series to date, it is undoubtedly sad that Bleach will end on more of a whimper than anything else.

Of course, given Bleach’s popularity, its expected that we’ll get a set of OVAs or a final series in the same vein as InuYasha when the manga. We’ll keep you posted on any updates on this!