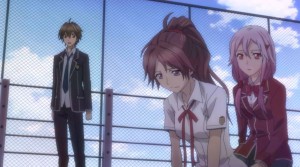 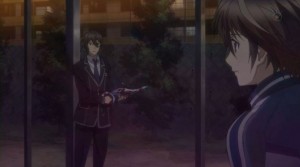 Now that the first arc of the story is completed, I’m both wary and excited to see how the story is going to progress.  It could go either way; Shu returns to school and his normal life or he could end up taking over the reins of the Funeral Parlor and end up bringing GHQ to the ground.  Judging by the brand new, shiny intro sequence we have, I’m leaning towards the latter of the two.  Anywho, we learn that two weeks since the incident at the airport has ended but things haven’t quite returned to normal yet.  All of Loop 7 (the area where the school, airport and other major buildings are) is under emergency quarantine.  None of the students are allowed to go home due to the quarantine and a lot of them live outside the Loop, so they’ve converged on the high school in order to make it an emergency shelter.  Shu is standing on the roof of the school and tries to contact his mother, but all forms communication – be it phones, radio or television – are out of commission.  Just as he closes his phone, Inori shows up and asks him why he’s on the roof again.  Shu smiles and says that he’s just drawn there; the two return to their friends at the school.  On their way back to meet up with their friends to discuss what they should do next to keep the students safe, they see Ayase being harassed by two male students.  She had tried to pick up a shoe that someone left sitting in the middle of the hall, but ended up falling out of her wheelchair.  Two students arrive and offer to help her into her wheelchair, but being the proud woman she is, Ayase rejects their offer.  That irritates the two men and they start harassing her to the point where they’re about to molest her when Shu finally calls out to them.  Of course, this just pisses off the two guys even more and they try to start a fight, but Tsugumi shows up just in time.

She ends up kicking on of the men in the chest so hard that he actually goes flying into Shu and both of them tumble to the ground.  At first they aren’t sure what to make of Tsugumi, but they realize that she basically just made fools of them and threaten her.  Tsumugi doesn’t back down which only pisses the two guys off more, but at least one of them has the sense to pull back their friend once they notice a group of students gathering around them.  Once they scurry off, Inori and Shu go to Ayase to make sure she’s okay, but she simply tells them to leave her alone since she’s not graceful when climbing back into her wheelchair.  They agree to leave her be and head to the student council meeting while Tsumugi stays with Ayase in case the two guys decide to come back and try to harass her again.  At the student council meeting, they’re busy going over supplies such as food, water, medicine and other necessities when Shu comments on the unrest of the students.  Yahiro doesn’t see a reason to do anything to help since they’re trying to survive, but Souta suddenly grabs the calender and suggests that they have a cultural festival.  Everyone is surprised, but he reasons with them saying that it’s about the time of year they should be having one anyway and that it’d be a great way to get the student’s minds off of what’s currently going on.  Everyone except Yahiro seems to think it’s a good idea and Arisa agrees to put the plan into motion, despite Yahiro’s protests.  With the cultural festival under way, the student’s moods appear to improve significantly and though Yahiro is concerned with supplies dwindling, Arisa is able to work something out with her grandfather so that they will have enough supplies to run the cultural festival successfully. 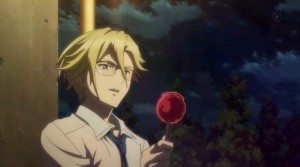 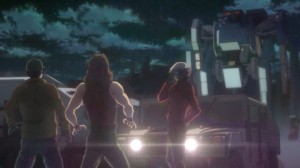 While the preparations are going, Yahiro and Shu have a small chat in a secluded area of the school where Shu is able to give Yahiro his own Void.  Yahiro is confused as to how he’s able to actually use his own Void now, but Shu just explains that his powers have completely awakened and they’ve changed somehow.  Once Yahiro returns his Void to himself, Shu says that he’ll probably never have to use his powers again but Yahiro tells him that he’s stupid if he believes that.  Shu seems shocked by Yahiro’s retort, but also seems to believe that he’s right on some level.  Unbeknownst to the students, there’s a rebel group only a few buildings away with a view of the school.  They seem pissed off that the school is having a cultural festival while others are starving or fighting with the rebels.  Suddenly, two of their comrades appear with a military-grade humvee and an Endlave.  They ask their comrades where they were able to get them and they simply said it was a gift from someone (we see a quick flashback of Makoto in a disguise and handing over the items).  They then start to formulate a plan to attack the school and steal their supplies.  Meanwhile, Ayase and Hare and making paper flowers for their booth and the two start talking about the incident at the airport.  Hare thanks Ayase for helping to keep Shu safe as well as everyone else, which seems to flatter Ayase but it also makes her a bit more depressed.  Somewhere in the school grounds, we see Tsumugi carrying several heavy boxes of items for the cafe that her class is putting together.  She bumps into Daryl – who has infiltrated the school – and forces him to help her carry the items.  Though he doesn’t want to help, there isn’t really a way to say no to Tsumugi, so he helps her and collapses after the effort.  She hands him a caramel apple as a reward and Daryl tries to reject her but she simply forces him to take the gift and show some gratitude.  After she’s gone, Daryl contacts Makoto and tells him that they’d be better off just blowing up the school, but it seems as though Makoto has some other plans for the school.  After disconnecting the call, Daryl grumbles about Tsumugi, but does eventually start to eat the apple she gave him.

The following day, the cultural festival is officially underway and everyone seems to be really enjoying themselves.  Tsumugi takes Ayase around the festival when she’s done with her shift at the cafe, but Ayase doesn’t seem to be enjoying herself at all.  Finally, when the two of them are alone, we find out that Ayase is still grieving over Gai’s death and feels responsible for it.  She then tells Tsumugi to leave her alone and wheels herself off.  Towards the end of the day, just as Souta is getting ready to have Inori go on stage for an impromptu concert, the rebels attack the school.  Students flee in every direction and Shu – who was with Ayase at the time – grabs her and starts wheeling her away from the rebels in order to keep her safe.  This frustrates Ayase and she grabs the wheels of her wheelchair, causing it to jerk to a half and she goes flying from the chair.  Shu tries to help her back into the chair, but she slaps his hands away and tells him not to make her feel any more useless than she already feels.  Their eyes meet and the ground below them starts to glow; Shu draws out Ayase’s Void for the first time.  Her Void turns out to be this awesome set of mechanical things that go on her legs and allows to run, jump, and fly; everything she hasn’t been able to do since her accident.  This causes her to feel a newfound sense of joy, even while she’s saving Hare from being run over by the humvee and causing the rebels to crash said humvee into a wall of the school.  Shu and Ayase effectively stop the rebels and the whole school ends up watching them.  They’re a bit embarrassed at first, but end up taking the approval from their classmates.  Once everything is cleaned up and people have calmed down, Inori commences her concert and everyone watches in wonder.  Ayase thanks Shu for allowing her to run on her own legs again for the first time in a really long time and also for not making her feel useless anymore.  Suddenly, Souta announces to the school that the televisions finally have connection again and they stream the news reel onto the stage behind Inori.  Somehow, Keido is still alive and kicking and he’s now effectively severing Loop 7 from the rest of the country.  As he says this, several walls arise around the Loop and completely block off all escape routes in and out of the city. 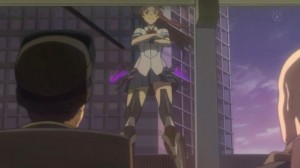 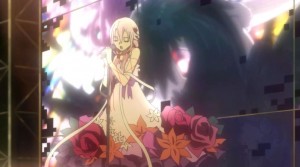 Opinions:  Though it started off fairly slow, this was a good episode.  We got to see how everyone is adjusting to life after Gai’s death and returning to school.  I was partially expecting to see a lock down after the last outbreak, but I wasn’t expecting it to be quite this big of an ordeal.  Seeing the students participate in the cultural festival was great since it showed them really being able to get their mind off of things, even if it was for a little while.  Yahiro’s predictions about Shu needing to use his powers again soon was right and I have a feeling it’s going to be an even bigger fight than in the last arc.  Considering Makoto is secretly funding the rebels makes things interesting, as does seeing Daryl infiltrate the school.  We still don’t know why he’s doing that, unless it’s to gather intelligence on Shu and his friends.  The rebel attack on the school was unexpected to a point, but I had a feeling there was at least one rebel group around there.  Ayase’s Void was pretty wicked and I’m glad that she was able to not only be useful but feel the joy of running full-out on her own two legs again.  However, the ending was truly shocking!  How did Keido survive and why are they barricading Loop 7 from the rest of the city?  There’s a lot of questions and not a whole lot of answers yet, but at least this second arc seems to be off to a good start!