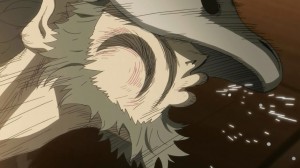 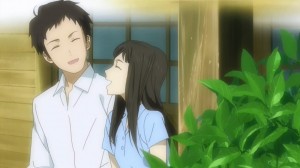 This was definitely another kind of classic Natsume episode. Taking on the issues of interactions between humans and youkai and just telling a great story in the process. Could really feel for the beard youkai and that girl by the end of the episode and getting to see what the letter meant was a great moment for sure. Every now and then it’s great for Natsume to go back to this kind of story and show how it can make you care so much about two characters who you have just met.

Of course it was fun to start off with the classic tale of Natsume getting attacked by a youkai wanting the Book of Friends. That power punch of Natsume also made a return and showed why he can take care of himself against a certain level of opponent. It’s a good thing that this youkai was a good guy since that ability to fake different voices could make him pretty troublesome if not dangerous. A few words from a distance could cause trouble between friends or even worse depending on how it was used. Of course it would have been too easy to just help and this youkai had to try something stupid like stealing the Book of Friends without realizing the limitations. We also got to see a return of Natsume’s ability to see things about a youkai from his dreams and thus gaining a better understanding. 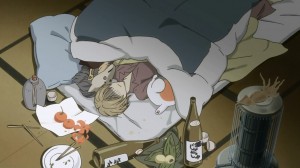 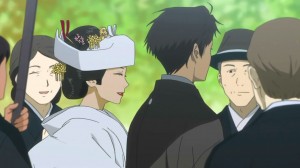 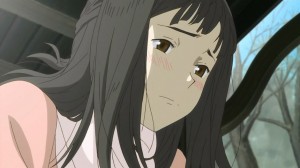 I really felt sorry for that girl by the end of the episode. She was just left hanging by a guy she was in love with and needed this youkai to come clean in the end to her. I can understand the guy had family obligations that he couldn’t fight against, but at least have the class to tell the girl what is going on. Instead he just goes and gets married without saying a damn thing to her. Not even thinking about how confused she would be and how often she would return to that shrine waiting to see him. Sure it would suck to have to make someone like her cry, but he had the responsibility to at least settle things. I’m glad that youkai was there so he could say what had to be said though it even took him time. I can’t blame him for getting absorbed in talking with this girl and probably falling for her pretty easily. Of course eventually he had to come clean since it was impossible to carry this on forever. A sad thing was that seemed like the girl had really fallen for him and not just because of the voice she was impersonating. It wasn’t done well, but at least he told her the truth which at least let the girl move on.

A common theme in the series is how the lifespan of humans and youkai are so different. This guy could go on a journey and by the time he came back the girl was long dead. We have to just assume she found the ability to move on and lived a happy life. But it’s just sad to think for a youkai a human is there one moment and gone the next. The fun friendship between Natsume and youkai like Nyanko will eventually be just a memory though a fond one. Talking about humans it was nice to see Reiko once again. She didn’t show up too often last season, but seeing her interactions with youkai compared to Natsume is interesting. They had a lot in common and of course some key differences in how they managed the people and youkai in their lives. It’s really too bad that even for humans her life was too short.

I like how there wasn’t really any threat to Natsume, but just an episode where he learned about a youkai and managed to help out. Guys like that youkai are the types Natsume can’t ignore because they have good hearts. It’s pretty common for youkai to talk dismissively about humans, but they seem to find something that just draws them in anyways. Maybe it’s the way humans live or how short their lives are, but there is just something that makes them unable to help getting involved themselves. I’m just glad in the end Natsume could help restore the letter to it’s former state and let that message be heard. There wasn’t anything resentful left in the girl at all, but just gratitude that she was told the truth. The fact that he cared enough to tell her the truth compared to the other guy was more than enough. 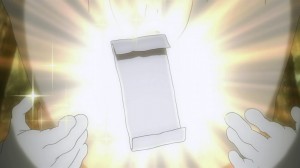 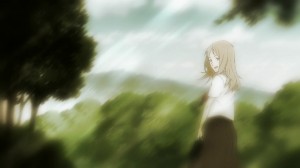 It’s episodes like this that leave me smiling. Sure it’s a bit bittersweet that the youkai and girl will never meet again, but their bond will be remembered nonetheless. There is nothing wrong with the series just giving us wonderful episodes like this without the plot going off in some serious direction. These episodes help Natsume grow as much as any after all.
Score: A+