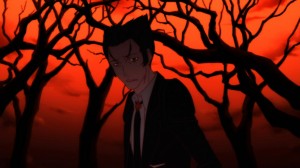 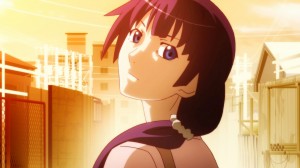 Now this is what I’m talking about! After two episodes of intense, almost uncharacteristically intense fanservice, we finally dive into the plot and story of this season. Oh man! Was this episode impressively awesome. I have to admit, last episode I had decided to just give up on Nisemonogatari ever having anything serious beyond fanservice and wordplay, and this episode totally blows my expectations out of the water. The third episode had everything that had made Bakemonogatari so famous and respected. Excellent dialogue, superb character moments, tons of intrigue, tension and some great sense of intrigue.

I suppose the first two episodes are what the Nisemonogatari PR people are going to use first Blu-ray/DVD volume, as they tend to collect around 4 episodes per volume.

So in this episode, even the first part of the episode, which felt like a calming discussion between Kanbaru and Koyomi. It seems that Kanbaru is a lot more sensible when it comes to Koyomi and his harem (it exists, whether he wants too admit it or not XD). Sure, as Koyomi declares early on in the episode, he’s only really interested in Senjogahara, but damn, he is sure playing it close to the chest with these “visits” to other girls. 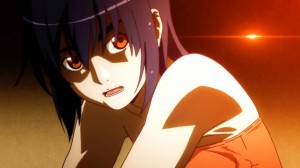 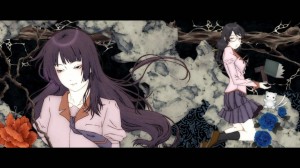 The major event in this episode, was Koyomi meeting the man named as Kaiki. And oh boy, was the meeting nothing short of eerie. Remember that time when vampires and Dracula and the like were actually creepy and scary? Kaiki was the embodiement of that creepyness. He just oozed death, blood and was definitely the sort of person you wouldn’t want to run into in a dark alleyway. I think SHAFT’s animation style, which goes towards simplicity both by nececcsity and as a visual style of theirs, really brought out the creepyness of Kaiki with the use of Red hues throughout the scene where Koyomi met Kaiki. 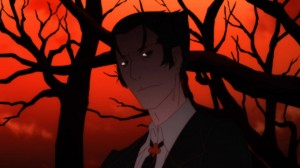 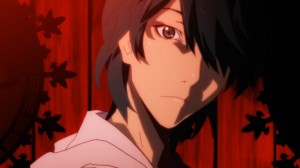 As for Kaiki himself, he seems to be someone like Oshino, someone who’s an expert on the supernatural. Of course, as far as Koyomi is concerned he seems to be more like Guiloteen Cutter. Who is Guilotine Cutter? I haven’t the faintest clue. I’m assuming people who’ve read the novels are probably familiar with the character. I’m guessing he’s part of the Kizumonogatari part of the story, i.e the prequel that is yet to be animated.

That said, after Koyomi failed to tail Kaiki, he runs into none other than Senjogahara. 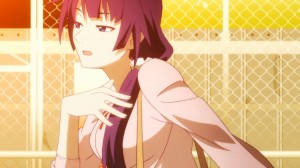 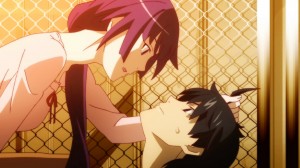 I have to say, I really loved the interaction between Senjogahara and Koyomi. If anything, Senjogahara shows us all why she’s boss, and owns Koyomi. It was pretty great to see Koyomi indeed, reaffirm that Senjogahara is the only one for him, and it was actually kind of freaky to see how much Senjogahara picked up on as far as the day went. If anything, Senjogahara’s rather twisted, sadistic humor and her “aura” of maturity are what make her one of the most endearing female characters in Anime today.

And to top it off, there wasn’t even any need for fanservice either. Senjogahara doesn’t NEED fanservice, that’s how impressive her character is. If anything, her appeal goes from that sort of twist that her personality has on the cliche Tsundere arch type. 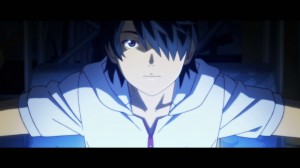 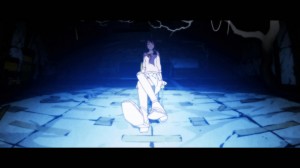 But beyond just seeing Senjogahara though, we got to find out why she had locked up Koyomi in that room, the issue from episode 1. It turns out Senjogahara totally freaked out when she heard about Kaiki, so much so that she decided she’d lock up Koyomi and keep him there until Kaiki left. If anything, this extremely outrageous behavior from someone like Senjogahara shows just how worried she was about him.

This freak out from Senjogahara, definitely makes the already mysterious and scary Kaiki all the more interesting of a villain. 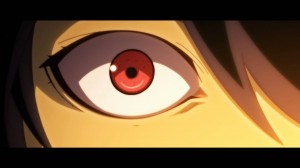 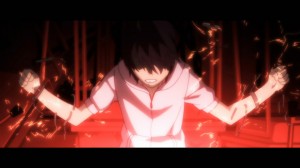 And in the spirit of awesome character moments, we got a mail from Karen asking for Koyomi’s help, which resulted in an epic breakout from Koyomi. Not only that, he decided to head back, and talked the rather scary Senjogahara down with words. As he mentioned, the reason Senjogahara loved him was because of how he rushed into danger to help those who needed it. Just as it seemed like Koyomi was about to leave with Senjogahara’s blessing, it was Senjogahara who got a call this time. 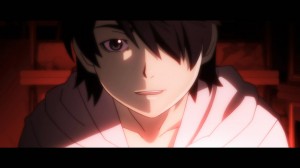 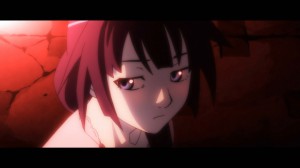 The episode ended on a really interesting cliffhanger, namely that it was Hanekawa who called Senjogahara, and prompted such a creepy change, where Senjoghara totally acted like a scared kid, and even went as far as to apologize to Koyomi. Holy hell, what exactly is the deal with Hanekawa and Senjogahara?

All that will need to be put aside though, as we’ll probably be seeing Koyomi rush to his sister’s aid next week. All in all, an amazing episode, without hardly any fanservice and good old awesome Bakeomonogatari grade story and character moments. This is the episode where Nisemonogatari really begins!