This episode is filled with NSFW (Not Safe for Work) content, and its literally impossible to a half decent opinions/review post without showing some of the stuff. As such, if that sort of stuff offends you or you are Ishihara… please DO NOT read this any further!

If you thought that the extreme fanservice would be over last episode, than oh boy were you mistaken. Nisemonogatari’s second episode takes the rather uncomfortable base established by the first episode, grabs and literally goes to the moon with it. Generally, fanservice is how a lot of Anime sells in Japan these days, and as I mentioned in some of my older Bakemonogatari blogs, the reason that Bakemonogatari probably did so well was  because of how interesting, different and endearing the girls in the show were, not perhaps the fact that the wonderous character interactions and story were equally as interesting.

It seems that Shinbou Akiyuki-san and SHAFT fully realize this, and man, are they totally dialing up the fanservice to high, uncomfortable levels. So at the risk of sounding like a broken record, I’ll cover some of the stuff that had me slightly… uncomfortable throughout the episode, as well as unearth some actually plot points that were buried underneath all the fanservicey shots we got this week. 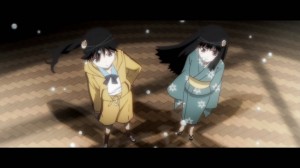 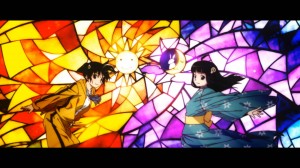 So, at the start of the episode, we had a proper introduction to Koyomi Araragi’s sisters, the fire sisters. As many older brothers who have two younger sisters will probably understand, Karen and Tsukihi follow the classic “one sister is a tomboy and the other is feminine” pattern that a lot of sisters  seem to have.

Also on a more uncomfortable note, the montage shots during Tsukihi’s introduction was erm… yeah: 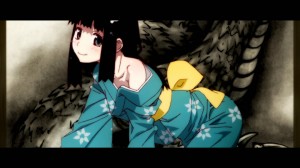 More interestingly however, we get to understand a bit more about what makes the two sisters tick. In many ways, the two seem to have a very arrogant view of themselves, considering themselves “justice” itself, rather “allies of justice”. In many ways, what Koyomi infers about his sister’s behavior is quite true. In many ways, they are indeed playing a game of sorts, acting like heroes. We all kind of know that Koyomi himself deals with the more serious and odd problems, and even he can’t really be considered a “hero” most of the time.

Of course, once the OP wrapped up, we got the reunion between Koyomi and Sengoku. Oh man… was this just… Wow. Uh yeah, Umm… err… Ahem! 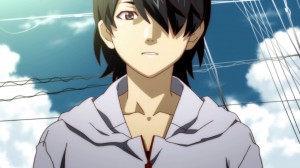 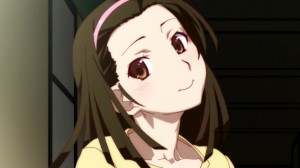 So! I have to comment on the fact that Koyomi is one “idiotic” and “dense” S.O.B. It was bloody friggin obvious that Sengoku was ready to mount him at the slightest indication of an okay from him, or well… even without it… But Koyomi just didn’t a darn hint. Either that, or the guy really is one heck of a pervert and enjoyed it. I’m seriously doubtful about whether Araragi Koyomi is the same guy I used to know from last season.

On a side note, Its hard not to notice just how confident Sengoku has become since last we saw her. Man… she was like a huntress in this episode. SHAFT… what are you doing to the pure and innocent image of middle schoolers? 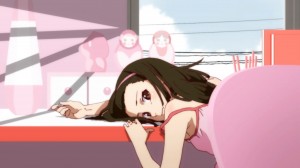 I mean, she went out and started off the time by saying: “Lets play the Ou-Sama (King) Game!”. In case you didn’t know, said game is where A King gives orders to the other players, ussually sexual in nature. Ahem… Yeah. On top of that, she’s okay with either role of taking or giving orders? Damn man. Koyomi just walked into a room that will take him past the point of no return. Luckily, Koyomi suggests they not play it and they end up playing the “Life game” instead.

As a bit of a breather, we are thrown into a bit more of the plot following this rather bizarre conversation. It is interesting to note that Karen and Tsukihi are up to something, and are investigating stuff related to a rumor about charms. The whole charms thing plays quite a bit into last season, where Sengoku and her whole issue with the snake resulted because of a charm. It seems that the story in this arc, is going to revolve around the Fire sisters afterall.

We leave things off about the sisters with Koyomi deciding he’ll have to talk to them about it. With enough of a breather given, and the game of  Life finished, Sengoku suggests (commands?) that they play Twister next. Koyomi, being the dumb socially naive idiot he is, says he’s never played it and Sengoku offers to show him how…. With his body: 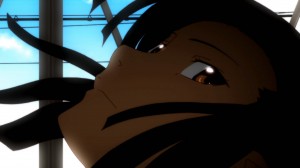 Luckily nothing happens, as Sengoku’s mom suddenly arrives back. Sengoku, unlike Koyomi, actually understands the implications of what she’s doing, and hence, Koyomi has to leave. THANK GOD! 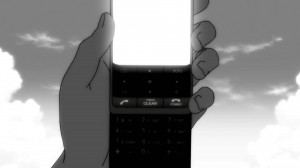 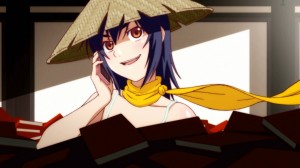 Now left with nothing to do yet again, Koyomi decides to call Kanbaru. This leads to a rather interesting conversation which involes stripping, public indecency and tons of word play. Now this here, I didn’t mind as much. In fact, I actually felt like we had gotten the old Bakemonogatari humor back, complete with a hilarious note about Kanbaru’s Grandmother walking in on her naked, talking on the  phone XD

As Koyomi heads to Kanbaru’s place to help clean up her room as he promised, he runs into none other than: 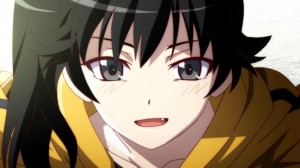 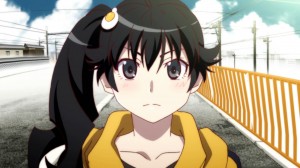 This little talk with Karen was another interesting play on words. Although the running gag was her talking cool things while in that pose: (Nisemonogatari, there’s that uncomfortable feeling again!!!)

The talk with Karen doesn’t go anywhere, and in the end, they decide to discuss this tonight, with Tsukihi there as well. In the midst, Karen gets a phone call and says that she might have her issue wrapped up by tonight. Very interesting indeed. I wonder who the person on the other line was? I’ll avoid widely speculating as well… its really pointless at this point. It really could be anyone.

With that conversation done, We finally arrive at Kanbaru’s house. Again, Koyomi being his awesome self, goes right into Kanbaru’s room without knocking. The result speaks for itself: 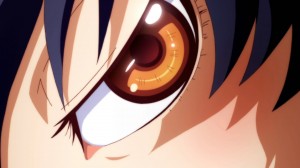 Just How Many Girls would you have to marry if you started taking Responsibility Araragi-Senpai?

Indeed, If Koyomi started taking responsibility, he’d friggin have to marry every girl in the show… and God knows thats not gonna happen. If anything, like Kanbaru said, Senjogahara would be beyond pissed. Speaking of which, It kind of really does feel like Koyomi has totally forgotten the fact that he has a girlfriend. What happend to the dude who flat out refused Hanekawa and proclaimed that he only loved Senjogahara?

See, its times like these, where it feels like a wonder why SHAFT and Akiyuki-san did all of this. I mean, it puts certain characters totally out of character, and that’s when I think the series has gone a bit far…

Of course, the fanservice continues, even after Kanbaru gets dressed (according to her) and we have another play on words, pervertedness and Boy Love, where Koyomi uses some reverse psychology to totally send Kanbaru’s mind off a bend. This result in him getting sexually harrassed and vowing to never start a conversation with Hachikuji in the same way: 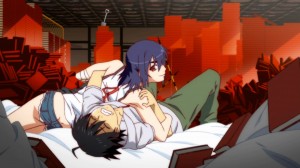 Nisemonogatari, SHAFT and Shinbou, Akiyuki-san… I have no words, no words for you. That is all I have to say on the matter. I haven’t the faintest clue what the point of this episode was, beyond just some serious fanservice and reintroducing Sengoku and Kanbaru in the oddest way possible. I don’t hate this show, but some of the things that are happening, I don’t like either. At the end of the day, I used to view the Bakemonogatari franchise as something more than an extreme fanservice show. The fanservice was more of an icing on the cake of a very wordy, complex and interesting show with great character development and what not.

As such, this is the last episode that I’ll probably be judging this when comparing it to Bakemonogatari. Nisemonogatari is simply a bit too different of a beast. XD 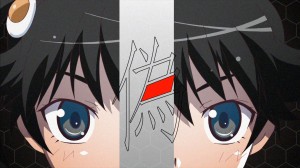 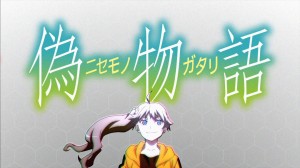 You know what’s weird? The relatively tame nature of the OP. Its a nice, upbeat song, and feels a lot like most of the other Bakemonogatari/Nisemonogatari OP songs. Pretty good I’d say! With some Karen centric animation, this OP is pretty darn good! 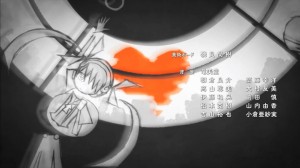 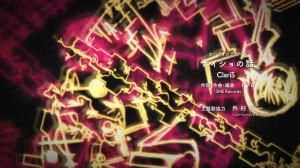 We finally get the ED, which is pretty standard Bakemonogatari fare as well. Unlike the previous EDs though, this one is kindd of forgettable, mostly because of how the animation for it is a blotch of various colors.  The song is pretty good though! Not bad overall.