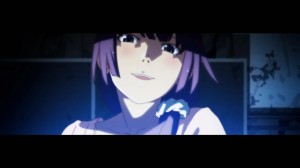 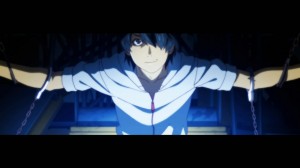 Nisemonogatari features the return of Araragi Koyomi, and with him, the various bunch of girls that he’s helped in the past. If there’s one word that could be used to describe the openning episode of the sequel series to the exemplary Bakemonogatari, its that it feels…. uncomfortable. Despite some rather uncomfortable moments in the episode, the opening episode definitely succeeds in grabbing one’s attention, and definitely sets stuff up for what will probably another great series.

The series literally opens up with Araragi in chains, trapped in some dark room. The person who kidnapped him? Turns out to be none other than Senjogahara. I have to say, Senjogahara has been kind of creepy before, but the stalker/possessive psycho girlfriend levels were off the charts in this opening segments of the episode. 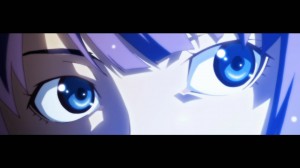 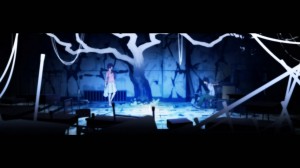 Not only that, but Senjogahara’s sadist levels were well over normal as well. Normally she enjoys teasing Araragi, but the whole thing with the water and Onigiri/Rice ball really put the S from Sadist into Senjogahara XD

At the same time, there does seem to be some reason as to why Senjogahara’s gone totally psycho. She does state some stuff about protecting him, and I’m sure as the series progresses, we’ll get a firm handle on what has her so spooked that she decided to kidnap her boyfriend and chain him in an old abandoned cram school. And in true Bakemonogatari (Now Nisemonogatari fashion) they managed to throw in a funny joke puncline in the grim situation.

After the OP, we probably flash back to an earlier time. Now, we find out Araragi’s being tutored by both Senjogahara and Hanekawa (lucky bastard! XD). Since Hanekawa cancels on him, he decides to head down, as he’s clearly bored. And thus we are finally introduced to one of the Araragi sisters: 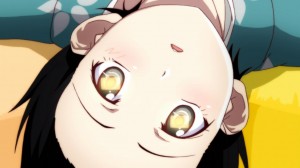 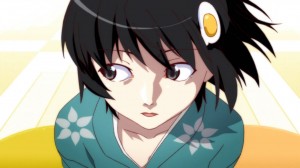 I’ve always been curious about the Araragi sisters, as we’ve always heard them say some stuff in the Bakemonogatari preview segments. The conversation Araragi Koyomi and his sister have is pretty interesting too. It also brings to light the obvious fact about Araragi, the fact that he’s clueless at the fact that Sengoku totally is into him. That’s Araragi Koyomi though, as clueless as he is. Or maybe he chooses to ignore it? That aspect of the guy’s personality puts him into all sorts of trouble, including Neko-Hanekawa from the previous series!

Of course, the way they introduce Araragi’s imouto (little sister) is just… argh! I know Bakemonogatari got a lot of its popularity from its female characters, especially how some of them were really moe, but seriously… this is a middle schooler. When, in the entire conversation, which I admit was a pretty interesting one, the shots all focus on bringing out “weird” poses from a middle schooler, my pedo-bear sense just goes buzzing.

I mean…. seriously, the series is already pushing it with Sengoku and Hachikuji, and now they’re whoring out other characters as well? I’m fine with fanservice, but loli, underage characters fanservice is just… ugh. So totally not cool. I feel rather disturbed by this, and its a lot more serious than the last series.

And it doesn’t stop there, as the perverted loli aspect of Araragi’s personality (which just randomly pops up I might add and doesn’t really fit), goes into overdrive when he sees Hachikuji: 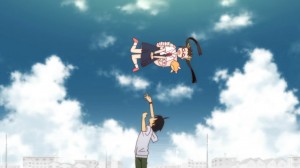 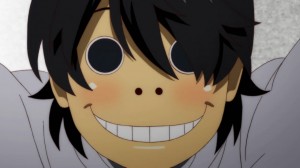 Again, while the conversation they have is interesting as hell, what Araragi is doing, along with the way the shots focus on Hachikuji, make me fairly uncomfortable. The conversation is actually a really neat way of recapping everything about the series that’s happened thus far, as well as put some character development on Araragi. If anything, he’s actually felt a bit of a loss after Oshino just up and left near the end of Bakemonogatari. There’s also the classic philosophical satire comedy on love and money, and even more jabs at Araragi and his “harem”.

All in all, this episode was a mixed bag for me. I’d rate it higher, but the loli/pedo parts really left me slightly unsettled. I know that Nisemonogatari is only appealing to its otaku market in Japan, but argh man, some things just seem really out of place and out of character. When fanservice starts messing with the characters and is just thrown in their, it kinda goes against what made Bakemonogatari such a great balanced package. Hopefully we won’t be seeing more of this loli-fanservice in this series from henceforth. 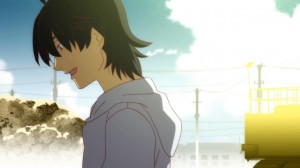 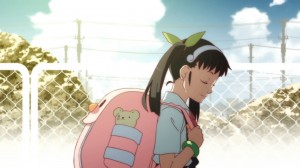 Either way, the series premier for Nisemonogatari definitely grabbed my attention, and I’m excited to see what happens when Araragi’s other sister Karen is introduced, and what happens to Araragi that leads him into the chained situation he was in the beginning of the episode! 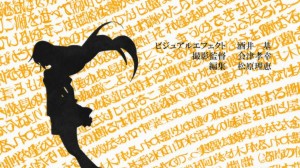 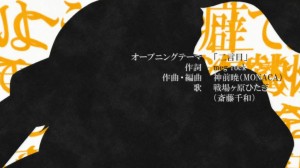 Given SHAFT’s tendency to change the OP every two or three episodes, at the start of a new Arc, I’m sure I”ll be covering a lot of OPs while I blog this series. Either way, this one focused on Senjogahara and was pretty darn great! The song definitely reminded me of the Senjogahara themed OP from the first series, but was still decently new and featured the same silhouette based animation that SHAFT is famous for. Pretty darn good I’d say!

There was no ED or Preview in the stream that I watched (which was on Crunchyroll, which is simulcasting the show) so I unfortunately don’t have anything to say here. Maybe we’ll see a preview next episode? Or perhaps on a later release. If we see a preview on one of the raws, I’ll update this area. Until then, see you next time! =D