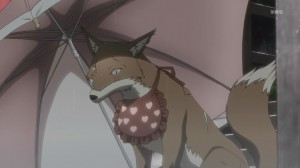 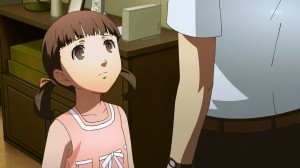 Glad to have Persona back after that week off. A good thing they wrapped up the Mitsuo battle last week since after a break the tension would have been somewhat killed. Instead we are welcomed back with a pure Nanako episode. I’m surprised they decided to throw together something anime-original like this considering how much further we’ve still got to go. But considering the preview hinted at them covering almost 4 or 5 social links in an episode it might not be that difficult to do. Anyways, the Magical Detective was on the case this week XD.

I’ll just admit right now that Nanako was definitely cute this week. A pretty entertaining girl in getting all costumed up and really trying to solve this mystery of what Yuu has been doing all summer. It’s really no wonder that all the cast have gotten attached to her pretty quickly. A really pure character who doesn’t hide anything. You really felt her loneliness with her father working and Yuu doing whatever the heck he’s been doing. I mean sure she’s probably been used to her father being busy, but Yuu not being available that much is a more new thing. Still despite that, it was fun watching her run around the town. Easily got the group involved in the hunt for Yuu since they were curious as well. Can’t blame anyone’s shock when he was found with all those different women this week. 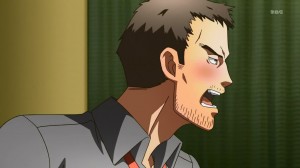 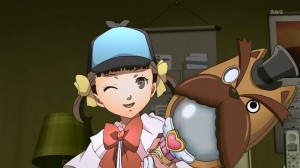 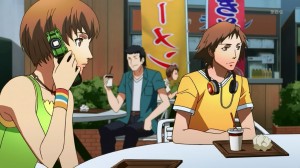 Even though he was helping people I say bad Yuu for abandoning Nanako. It’s not all about the social links outside the home after all. Considering Mitsuo has been arrested he could afford to spend some time with Nanako. Without a case you’d think he’d have more free time, but apparently he decided to ignore Margaret and just fill his plate right up with other people’s problems. Guess he’s kind of the guy who can’t help throwing himself into other people’s problems. Curious to see how they handle next episode since we saw how tricky it was to even try to handle two in an episode (moon and strength).

Can’t forget about the return of Kuma’s funny glasses. Rise clearly wasn’t a fan of them though XD. But of course combining those with that weird magnifying glass was entertaining enough for Yukiko. That girl definitely has a strong sense of humor. Of course she can definitely get carried away with her laughing. The main cast had quite a crazy couple of days seeing Yuu with a women who had kids and even an older lady. If you didn’t think of social links you’d think he was having some weird relationships behind their backs.

Maybe one more interesting thing was how Naoto is still hanging around. I guess Naoto isn’t that eager to head back to the next case quite yet. Pretty kind to give Nanako the boost she needed in order to race right back into the case. Naoto might give a mixed impression to people, but clearly not the type to leave someone alone who looks that lost and sad. 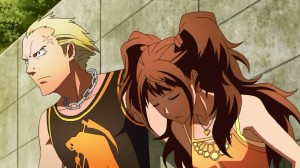 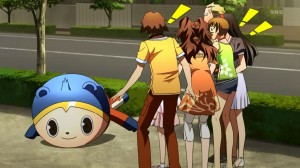 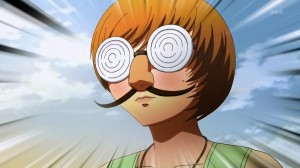 Another small scene was the sushi scene that let us know where the investigation currently stands. It sounds like they’ve got some good physical evidence on Mitsuo which will let them move forward. Of course if he’s so open to admit that he killed the people then that alone would be fine, but physical evidence never hurts.

So we also got a new OP and a Nanako ED this week. It’s not a bad new OP though I kind of prefer the first one and on top of that I like the games opening music the most. The song didn’t quite grab me though until it really started to get into the chorus. Still it could have been worse for a new OP. The Nanako/Loveline ED was in one word “cute”. I mean we have these soft and very ‘magical girl’ style pictures of Nanako and Loveline. Of course it ties right into this episode with following Yuu around and just showing Nanako and Loveline together. Plus the song isn’t bad. It’s got a pretty catchy feel to it. It’s nothing unbelievable, but just a nice ED that I suspect will just be for this week. Not sure if that means a completely new ED is coming our way or if they will just stay with the old one considering it’s connection to the plot with the arcana cards. 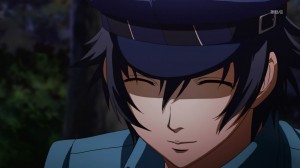 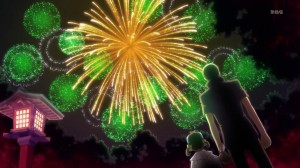 Anyways not a bad episode. Don’t think I could say a Nanako episode could be bad considering how likable a character she is. The real question is how next week is going to be handled since it feels like a lot of arcanas will be crushed in together.
Score: A-