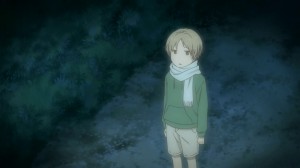 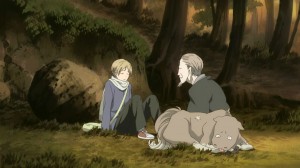 Welcome back Natsume. Being able to watch another episode of Natsume just makes everything a little brighter. One reason I’m glad to have it back is probably because a lot of series have taken this week off. But even if that wasn’t the case Natsume is just a series that you know will give you a good episode every single time. They didn’t slack off in this first episode either since we got the return of the Matoba clan, a dangerous group of masked youkai, and a stolen Book of Friends.

I think Tanuma had a pretty good moment in this episode when talking to Taki. They really explained a reason why Natsume still doesn’t tell everyone about his situation. Suppose simplified it is the idea that “ignorance is bliss.” Everyone around him can be happy because they don’t realize the kind of life he has to live. They just have to worry about the normal things and not the youkai. Certainly he could trust his friends and the Fujiwara couple since they would accept him, but he still wants to keep them in the dark. Of course I’d prefer he just explain things since there is plenty to be worried about in the world anyways. Sharing the worries isn’t a bad way to live. But at least it has moved beyond him being worried about things being like in the past where he might be rejected. Still glad he does have human friends like Taki and Tanuma who know about those things. While he wants to keep everyone smiling having people who will stand in his corner is a good thing. 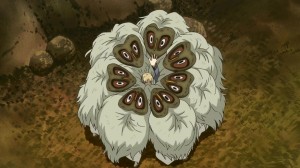 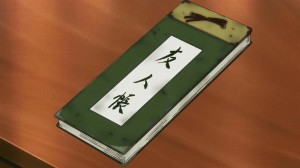 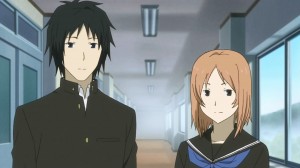 This episode did show how difficult that kind of stance will be for Natsume to maintain going forward. Youkai that were willing to attack him while in the school and not exactly waiting for him to be isolated. There isn’t an easy way to explain getting grabbed and choked by something that normal people can’t see. If he doesn’t want to cross the line of being seen as insane he’ll have to admit something that sounds insane. The Matoba clan is a human danger that won’t be easy for Natsume to avoid.

On that note I didn’t expect we’d see them again so soon. The Matoba clan is just dangerous in so many ways. They have so many youkai under their control and are willing to do horrible things with them. If that wasn’t bad enough they are more than willing to make use of their human forces. While it wasn’t shown off much here Natsume has shown a good ability to hit youkai pretty hard, but humans won’t be that bothered by his innate spiritual abilities. While I don’t like any of their members, a story involving this family is a great way to get immediate tension. You can imagine what a group like this would do with the Book of Friends if they got their hands on it. That would probably be the worst case scenario besides some super evil youkai doing the same. Luckily youkai wouldn’t readily tell someone like Matoba about a book with that much power.

I do like how nothing is quite so simple in the series. The youkai were clearly not great guys attacking Natsume like that and using other youkai to lure him in. But considering they were facing the Matoba clan I can almost understand where they are coming from. Still if they are willing to go as far as swarming Natsume then some caution is required. I wonder about the master they were talking about. We didn’t get much understanding of the kind of youkai he is and its hard to say if he ordered them to seek out the Book of Friends. The youkai trapped in the jar almost hints that they made this decision and believed using the book that their master can restore the forest (which probably means kicking out the Matoba clan). 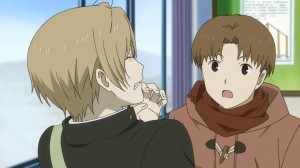 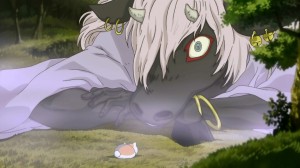 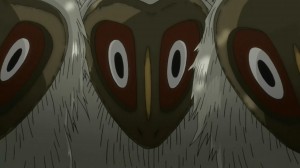 I’d rate this above the third season’s opener if only because they got right into the action. They still managed to cover the important background information, but they didn’t get buried in it. We’re starting right off with a two-parter which just makes it feel like Natsume is already in mid-season form. Of course they can probably get away with this because the third season wasn’t that long ago.

On a lighter note I still love the banter between Natsume and Nyanko. Those two can always act like they don’t care, but after all this time you can feel the friendship. I don’t think Nyanko would have clue what to do with the Book of Friends anymore. Nothing wrong with this entertaining duo.

In terms of the OP/ED it’s a mixed bag. I’m starting to think they are just constantly going downhill in terms of my interest. The OP this time around just didn’t seem right for whatever reason. I didn’t hate the song, but for whatever reason it didn’t work for me. The ED was actually a pretty good song, but I miss how the first couple seasons had a little melody that lead into the ED. Of course it’s possible that because this wasn’t an episode that concluded (being a two-parter) they didn’t feel the need to do something like that. I do like how the ED shows those cute scenes. It’s always good to see how Natsume’s small circle of friends is constantly growing and not just taking in humans. 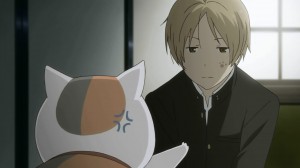 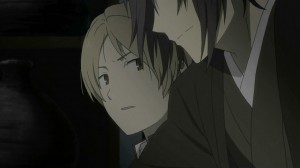 I’m glad to have Natsume back for another season. This episode really makes me interested in seeing the next one since it ends with that cliffhanger. Matoba is just not someone you can trust and Natsume being alone with him is something to be worried about. Hard to tell how this situation might be resolved since you have a main youkai of the forest who is struggling to defend the area and a group like the Matoba’s who simply want to acquire more power. Bring on the next episode and some Nyanko entertainment.
Score: A