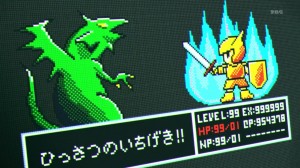 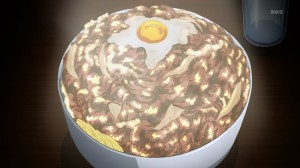 Well a pretty busy episode overall. We have a new murder victim in King Moron, Rise officially joins the team, and Kuma grew a body….wait what!? Have to say that Kuma really stole the episode in a way with the whole body development. We are talking about the guy who only a few episodes ago was proven to be empty and hollow. Then suddenly he shows up with a whole body inside that bear suit. It really does add to the mystery of Kuma. What exactly is this guy who can summon a persona and grow a body? We’re probably not going to get answers any time soon, but it does make you wonder. Body or no it was still the same Kuma in this episode. Relaxing in that chair, making chaos during their meeting, and now working at Junes as a mascot. He does have the right costume for that kind of job, so might as well take advantage of it.

On a darker note the death of the teacher King Moron (good nickname for a bad teacher) does take the cast by a surprise. After all it doesn’t match up to what they’ve seen so far. That wasn’t exactly the kind of guy that would get on TV and certainly didn’t show up on the Midnight Channel. They did make a good point that the killer could just be frustrated that no one was getting killed lately and made a different move in response. Still the timing is surprising since he killed right when they saved Rise. Would the killer really snap so quickly? Glad the team managed to keep their spirits up thanks to….a really deep bowel of food XD. 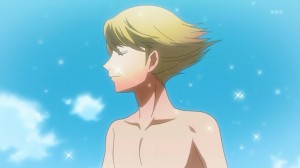 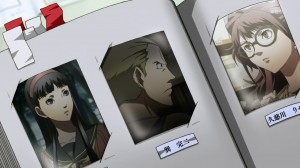 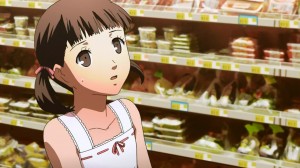 Then of course we have the huge focus put on this Mitsuo character. Who knew the creepy guy from earlier in the series would return in such a big way. Kind of an ouch when Yukiko completely couldn’t remember him. Not that I feel for the guy, but she has a surprisingly bad memory when it comes to rejecting people. Plus the fact that she could forget someone that creepy is surprising as well. But it wasn’t only Yukiko this guy bothered. Nanako was also harassed by this jerk. The most important thing naturally is what he said in those message boards. The messaages about him being the killer and then finally his message on the midnight channel. Maybe when it was just on a message board you could rank him as a creep, but when he appeared on the TV….The guy certainly seems to have anger issues and is lashing out at anyone, including a little girl getting groceries. It’s just those eyes, the kind of eyes you could see on someone who goes around killing people. No matter what the group can’t let this guy just continue going around and killing.

On a lighter note, it was nice to see Rise join with the group. A hint of a lighter personality making an appearance here. Not surprising since she has some people to rely on now and has other things to focus on rather than her idol career. Can’t let down ones guard around the girl with the lovers arcana. A fun little message at the start of the episode given to Narukami. Certainly a strong romantic bond could help his ability, but things could also go bad. Almost like a warning to not be a player there since if he just keeps building up affections in all the girls and he eventually picks one there could be trouble.

Poor Yosuke. Does a nice thing in giving money for Kuma and Kanji to go eat and then he finds out Chie and Yukiko put a whole outfit of clothes onto his tab. I’m sure part of the resaon he’s got Kuma working is to pay off that tab. Chie and Yosuke do seem to end up arguing a lot. Guess their personalities just lead them to natural conflict. Sometimes he starts it, but in this case it was on Chie for spending his money. 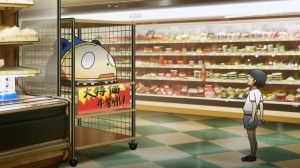 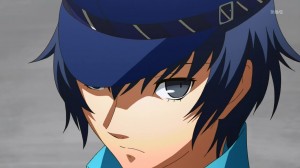 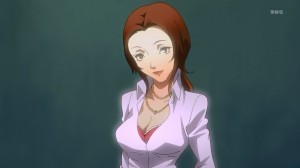 Maybe the biggest victim (outside of King Moron) was that kid who kept finding Kuma’s head. Narukami really can’t leave that thing laying around so much. Still the second time it was forgiveable since it was about protecting Nanako from Mitsuo. Though I suppose in terms of victims, Narukami’s class falls into that category. That’s…some teacher they got to replace King Moron.

An interesting part of the episode came with the scenes surrounding Naoto. Naoto’s identity being revealed as a detective does give some context now to the attention paid towards Kanji. Perhaps Naoto suspected that Kanji could be a target and thus asked some questions. While I doubt Naoto has a clue about the TV incidents, it’s obvious that he suspects that Narukami’s group is connected to these events. Good point made by Rise and the others that this isn’t a game for them. It does remind me of what Yosuke’s shadow talked about, but right now they aren’t motivated by thrill seeking. Innocent people are dead and most of them were nearly killed by this person, they’ve got good reason to be involved. Still can understand Naoto’s feelings on working on a case and then being dumped the second a suspect comes into the picture.

This episode felt like the first time Narukami stepped up as a leader. For a lot of the series he’s felt more as a comical part of things rather than a leader for this group. At the end it showed that he doesn’t want their team to just be done. Maybe can say he’s attached to what they’ve been doing, but it’s also responding to the feeling of everyone that they don’t want to go their separate ways. At that moment watching the midnight channel was a way to postpone the end of their mission. It was also a rare time when he finished the episode and didn’t have something comical to say about the midnight channel. 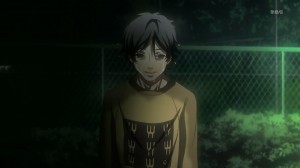 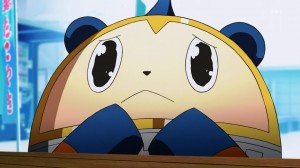 Right now the enemy is in the team’s sights. They know where they have to go in order to settle things. That creepy guy has dropped the gauntlet and obviously the team will respond to that. To this point it’s been about rescues, but this time they can focus on just wanting to beat Mitsuo up XD.
Score: A