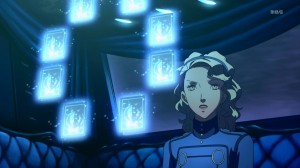 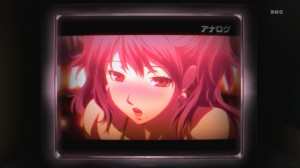 Well this time Kuma and Rise save the day. Even though this started as a mission to go and save Rise, both she and Kuma were necessary in order to settle this. I’m impressed that they managed to combine both the Rise rescue and Kuma’s shadow into the same episode without it feeling too rushed. By the end it did feel like they were in a hurry to set everything up for that scene after the ED, but overall I think they handled it well. Rise got a lot of her problem set up pretty well in the previous episode so she didn’t need a whole episode like Yukiko to explain things.

Sometimes hard to read Narukami though. I expected the recording jokes (him spamming the record button on the remote), but did seem like he was effected by Yosuke bringing up how they couldn’t prevent her capture. Still at least for me it felt like he was more serious about this rescue. Yosuke was mostly alone in the goofing around this time around. This time he had an emotional reason to want to save someone and perhaps a sense of responsibility because he was the last one to see her before she was taken. 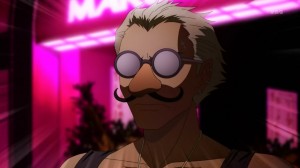 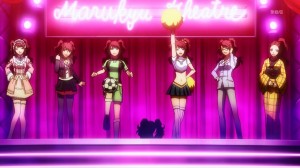 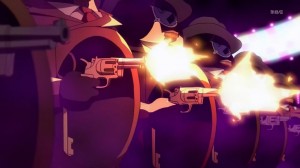 I liked the touch of all those different Rise’s showing up to add to the mental attack. It made the shadow’s point even stronger, asking exactly who is the real Rise. Because of her job so many different personalities had to be shown off and her true self could be lost in the mess. Leading to the question of whether there was a true Rise. In the end Rise accepted that all of it came from her. A depressed girl coming home, the idol, the girl who enjoyed what she did, and someone who just wanted others to see her. Her shadow took things to the extreme with the stripping. Physically putting out her emotional wish to truly be seen. Of course can understand Rise wanting to stop her shadow from stripping in front of everyone like that.

I have to say that the opening of the episode was dead on this time. This combination of Rise’s shadow and then Kuma’s shadow was the biggest test for the group yet. Rise’s shadow was incredibly difficult because every move could be read. They were getting hit by their weaknesses which left no room for Narukami to even consider changing personas. It probably wouldn’t have mattered either since that persona would be scanned in turn. Even though their team had increased thanks to Kanji (and his physical powerhouse persona) they still couldn’t do anything. This was one time when the group really had to face the fact that they might die. Sure the danger had been there from the start, but this felt like a hopeless fight. Kuma came through huge and gave more evidence of how strange an entity he is. Rise’s scans and her shadow struggled with him. Of course any time an empty bear suit starts moving around you know something weird is going on. Was pretty impressive to just have him take that attack and then make Shadow Rise’s weapon overload.

One thing I liked in terms of changes was Kuma not having Rise’s ability to give intel about shadows. It didn’t make much sense really that his nose/whatever could do all that. That change gave Rise’s persona a lot more weight since it can and will give important information. They’ve had to respond and react to things like those enemies that could reflect magic. From now on they will have important information in these battles. 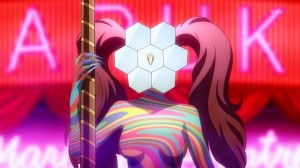 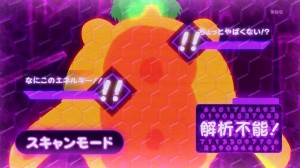 Shadow Kuma was pretty freaky though. Just this huge and cold entity. The other shadows had been fired up and trying to make a point, but it felt like this guy could just power himself up alone. A huge personality clash with Kuma who is such a silly and usually energetic character. This guy just felt more like a philosopher and dark. Rise’s scans seemed to prove that there really was something different about that guy. After they took him out he really was completely dead silent. You have to wonder what he was going to say to Kuma before he was cut off. Whatever the truth this guy was pretty dangerous just by being there. If they didn’t have Rise then it would have been a loss. Everyone was completely exhausted and it was all they had just to attack that one weak spot.

Glad that Kuma bounced back and is now….training XD. This episode was good for bringing back those questions people initially would have about what Kuma is exactly. He was able to have a persona which is a strange thing to be sure. Really all one can do right now is speculate and wonder.

It does feel a bit like they are hinting or teasing at a Narukami and Rise ending. I mean he had that personal reason to go save her, he did end up holding onto her quite a few times, and even Izanagi helped steady Himiko while she did the necessary scanning. Now of course this was her rescue episode some attention would make sense, but I wouldn’t be surprised now if they went a bit further with it. Won’t deny that I like Rise’s character so if they do go that route I wouldn’t complain. But nothing is set in stone yet that’s for sure.

The last scene should surprise a few people. After all they saved a potential victim in Rise and everything was looking good. Can’t say though that the scene at the end looked like anything other than a body hanging over some railings. 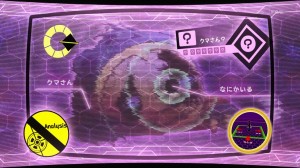 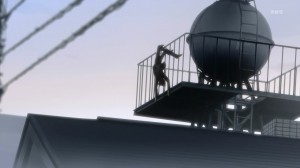 Still this was a pretty good episode overall. Maybe could have been visually sharper, but still not bad. Managed to tackle some major events like Rise and Kuma’s shadows and hint that things could be getting worse.
Score: A