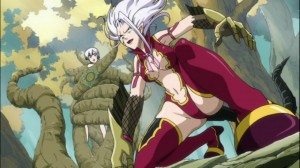 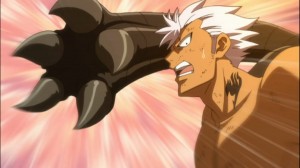 Double episode review! While this was rather unintended, I guess it really does make sense to cover these episodes in one go, as they really do bleed into one another. And man… Are the Fairies really dropping like flies, and this arc just continues to add on the twists.

There were a total of three major encounters in these two episodes. The first and probably the one that will have the biggest ramifications on the series, was the big fight between Azuma and Mirajane. Mirajane going all Satan Soul on Azuma was beyond badass, but as expected, she couldn’t maintain it for long, given she had already used it once before during the Fairy Tail S Class Exam. The fight she put up was brave, and it was extremely sad to see her lose. 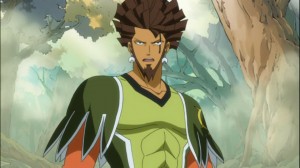 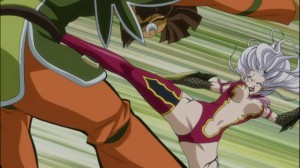 All in all, the one thing that really pissed me off in this entire fight was Lisanna. I really haven’t had much negativity for as of yet, and to be honest, she seemed like a smart, cute and honest girl, but this episode really makes me think that she has to be the dumbest chick Fairy Tail has to offer. I mean, not only did she intentionally provoke Azuma herself, but she want on to put Mirajane in serious danger by revealing who she was. Added to that, she then got captured and was completely useless. Mirajane, having lost Lisanna once before, choose to sacrifice herself to save her sister.

Everything about what Mirajane did, from the intense battle with Azuma, to using every bit of her remaining strength to protect Lisanna was amazingly awesome. At the same time, Lisanna sure as hell didn’t deserve it, as all she was was brash, rash and stupid throughout the whole thing. 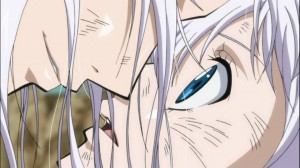 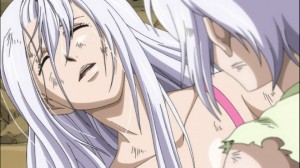 I’m not sure if Mirajane is dead, and I highly doubt it, but if she is…. Man, so totally not worth it Mira-san! I mean… just… ARGH! It was a really sad and heartwarming moment though, seeing Mira smile as she took the brunt of the attack. Added to that, seeing the smile on Mirajane’s unconscious face… was just heartbreaking. Now again, I doubt Mirajane’s dead, as Shounen shows love to hint at that stuff, and pull back at the last moment. Then again, Lisanna was dead for a good while before she was brought back, so it might be that Mirajane’s out of the picture temporarily until some point in time. I dunno, that family just has the worst luck of them all being  alive.

Either way, we’ll find out eventually I suppose. Speaking of the Take Over Family (yes that’s what I’m calling them now XD), Elfman and Evergreen also had quite the fight on their hands. I can definitely say that both were extremely overpowered by who they faced, but they put up a pretty good fight and actually had some pretty good teamwork in there. Anyone thinking that Elfman and Evergreen are not item… well… you’re clearing deluding yourself XD. Only Natsu would be dense enough to not notice that XD 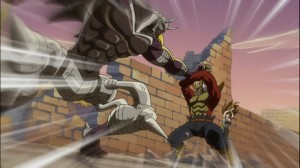 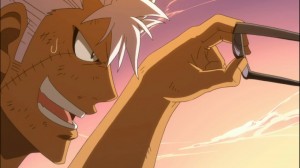 It was pretty sweet seeing Elfman come up with a rather tricky plan for a change, using Evergreen as a decoy first, and then using his Take-Over power to get himself a new arm, and then take His enemy’s glasses. IT was a pretty solid plan, except for the fact that said enemy can IMAGINE stuff and it appears in reality. From the get go, Elfman and Evergreen (who he started referring to as “Ever”  XD) were waaay in over their heads. 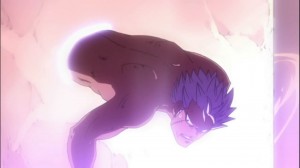 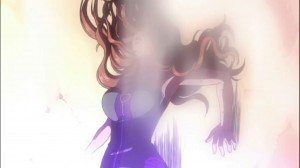 I liked the final moment of  theirs, as they tried to reach out for one another as they got blasted to the ends of the earth. Wow…. That sounded really sarcastic, but it truly wasn’t. It was a touching moment, and one that definitely makes me want to ship those two.

And with two fights conclusive, we really  gotta wonder the premise for this arc. In shounen manga, its generally really overpowered villains that seem like their winning before the heroes save the day by a sudden powerup. In Fairy Tail? There’s no sudden power up and the good guys just… lose! Its quite intense, as we’ve already had Gajeel almost die trying to take out two guys, Natsu take out Zancrow by a small margin and we’ve had both Mirajane and Elfman lose to their respective enemies. Its definitely not looking good for Fairy Tail so far. 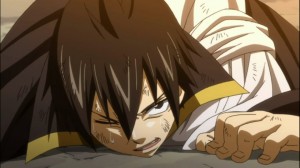 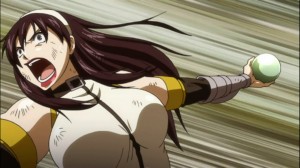 Added to that, we’ve had creepy stalker chick already defeat and capture Zeref. Wow… is she friggin creepy. I mean,  there’s stalker and then there’s what that obsessed freak is. SCAARY!! Also it was kinda really easy to take down the legendary Dark Mage Zeref wasn’t it? My guess is that this is just his sealed form, and the real personality has been trying to claw itself out. That’s probably what happens when that black energy is released everytime. With Grimoire Heart planning to release that, its really really gonna be hell if that guy breaks loose.

Of course while Super Saiyan 3 Stalker Chick definitely defeated the guy, she ended up just curling up to him for the remainder of the next episode. BEYOOOOND creeeeeepy! And it was around this time that Grimoire Heart’s plan was revealed. A world with just magic users?

This kinda screams Harry Potter, as Voldermort wants to do away with the Muggles and Mudbloods doesn’t he? I hate drawing a Harry Potter parrallel to this awesome series, but the parrallel is there. Yes, Purehito is actually Voldermort in the Fairy Tail universe! :O 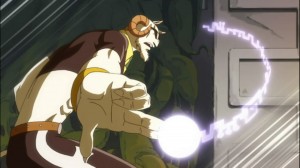 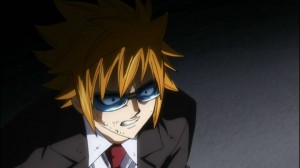 Of course, that wasn’t all, as we got some hints and one rather unexpected twist after this. The big battle between Loke and Capricon started in episode 107 and with it,  a twist that I wasn’t expected. Loke hinted at some danger for Lucy,, and it turned out that Capricon was not only a celestial spirit, but that he had formed a contract with Lucy’s mother! Up till this point we had never even heard of Lucy’s mom, and then we get this, at this of all unexpected moments. Loke wanting to shield Lucy from Capricorn actually went towards him figuring out Lucy’s identity. I’m very very curious to see what the story is between those two, and why Capricorn hates Lucy’s mom so much that he has begun enslaving Humans and summoning them. This whole story is definitely very unexpected and highly interesting. 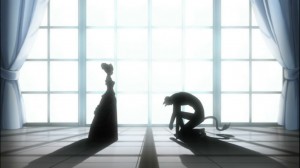 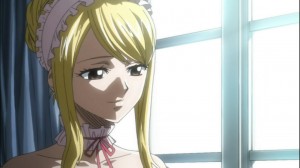 The question remains, can Loke stand up to Capricorn at all? Was he indeed just buying time for Lucy? I definitely am curious.

And with that, there are two other fights brewing the pot that is Tenroujima, namely Natsu going towards where Super Saiyan 3 Stalker chick is and we still have Erza’s battle with Robo chick. Also, it seems the new magic council has Etherion as well, and might not be above using it on Tenroujima Island and wiping out Fairy Tail alongside Zeref and Grimoire Heart…..

Intenseness all around. Cannot wait for next week, as things will only continue to intensify I reckon. I wonder how many Fairies are going to surivive this massacre?

Next week we have the Loke fight continue, and the start of the Erza fight! See ya all next week!