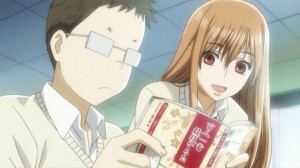 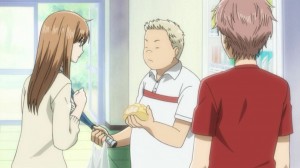 Considering Chihaya only needs one more member for her club to be recognized as an official club, I’m not surprised that this episode focused on her obtaining that last, elusive club member.  While I initially thought it would be as boring and lackluster as the previous episode, it actually turned out to be really, really good!  So the episode starts off with the entire karuta club standing outside the main gates of the school, attempting to hand out fliers to passing students.  As expected, every student ignores them and walks right on past.  Kanade mentions that one of the girls that passes them would look really good in a hakama, so Chihaya chases after her and tries to get her to join based on that fact alone.  The girl hesitantly tells Chihaya that hakama are troublesome and that she’s reluctant to wear them during New Year’s celebrations.  Chihaya lets the girl go, but she doesn’t seem to be deterred in her search for the final member.  However, because she came to school early and skipped breakfast, her blood sugar becomes low and she ends up falling asleep during class.  The same teacher who scoffed at the idea of the karuta club even forming was ironically the teacher whose class she ended up sleeping through, and she wasn’t too happy to find Chihaya sleeping.  When class ends, Chihaya’s friend wakes her up and tells her that the evil queen was glaring right at her.  Chihaya doesn’t really seem to care since she was so tired, but she perks up when she notices Komano reading a beginner’s guide to karuta.  She walks over to his desk and praises him, but she’s soon embarrassed by her stomach growling audibly.  Komano tells her to go get something to eat, so she slinks out of the room and does so.

In the cafeteria, she’s grabbing the last jelly roll when she spots somebody familiar.  Turns out, it’s the same fat kid that Arata competed against in the karuta tournament when they were kids!  It takes the poor kid a few moments to realize who Chihaya is, but when he does, he’s utterly shocked about it.  Chihaya then tells Nishida that he should join the karuta club because they could really use another strong player, but he refuses before telling her to leave him alone and running off.  Later that afternoon, while Taichi is teaching both Kanade and Komano the basics of karuta when Chihaya comes rushing in and tells Taichi that she found someone important for their club.  Taichi follows Chihaya and they see Nishida in the cafeteria again, buying a melon pan when the two surprise him.  Chihaya actually tackles him and tells him that they really do need him to join their club before Taichi is able to pull her off of him.  He then greets Nishida and the other boy knows exactly who he is before hesitantly greeting him back.  Taichi then implores him to join their club, but Nishida tells them that he played tennis in middle school and that he plans on continuing to play it through high school.  He then leaves, but Chihaya doesn’t seem to be done with him quite yet.  She ends up following him to his tennis practice the next day and realizes that he’s really very athletic.  She also notices that his feet are moving to the same timing and rhythm as karuta poems, which means he’s really using tennis to replace karuta.  We also see Nishida playing and thinking about how easy tennis is compared to karuta and how ever since he was shamed by Arata, he hasn’t had the desire to play anymore.  Realizing that Nishida is just using tennis as a replacement for karuta pleases Chihaya and she whispers a poem to him (she’s close enough that she can do this without getting caught) and it completely throws off his game.  Eventually, Nishida tells his coach that he’s not feeling well and needs to go home. 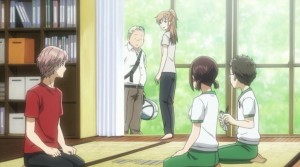 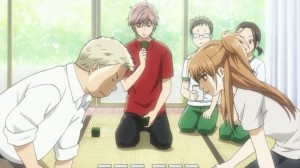 However, instead of going home, he stops by the room that they’re using for karuta.  He teases Taichi for starting at the beginning, but Taichi isn’t phased and says that everyone has to start somewhere.  Chihaya shows up shortly thereafter and sees Nishida watching them.  She gets all excited and asks him if this means that he’s decided to join their club.  Nishida tells her no and that he only wanted to tell them to leave him alone and quit trying to recruit him.  He goes on to say that karuta is based on talent, not skill that you develop through practice.  Taichi and Chihaya know instantly that he’s referring to Arata and Taichi tells Nishida that he should stay and play just one game with Chihaya.  He tells Nishida that Chihaya continued to play karuta all through middle school and because of her practice, has become a really skilled player.  Nishida scoffs at this and is about to leave when Taichi taunts him, saying that he didn’t realize it would be too hard for him to beat a girl.  Of course, Nishida accepts the challenge but says that if he wins the match, they have to stop trying to recruit him and Chihaya has to stop calling him Porky.  Chihaya counters with the fact that if she wins, he should at least consider joining the karuta club.  With the terms agreed upon, they set up the match and proceed with their memorization time.  Taichi is the one who reads off the cards, not the tape, which makes for a good ambiance as he does have a good voice for that sort of thing.  Kanade and Komano watch and use this match as another learning opportunity.  When the match starts, Chihaya is surprised by how fast Nishida is and how skilled he is.  Even after not playing karuta for three or more years, he’s able to easily take a card from her and his lead grows quickly and steadily.  Nishida starts to reflect on how he originally started playing karuta because it was fun and he was often praised for his skill at the game.  That is, until he was defeated at the tournament by Arata.

After that, he realized that there’s a vast difference between being skilled at something and having an innate talent for it and that’s why he quit playing karuta.  While he’s thinking about that match, Chihaya manages to steal a card from him and the tide of the game seems to be turned.  Unfortunately for Chihaya, Nishida starts to really concentrate and manages to keep his lead in the game.  When he sends her a card, he notices that she’s staring at two particular cards and ends up sending one of them to her side.  Taichi sighs because Chihaya is too easy to read and even Kanade and Komano realize that Chihaya’s way too easy to read.  The game continues at a steady pace and the two continue to go back and forth with snatching cards from one another.  Nishida notices how happy Chihaya is while playing and wonders if that’s how he looked when he played as a kid.  Chihaya thanks Nishida for a good game, though that seems to confuse him since the match isn’t over yet.  We then find out why she thanked him; the single syllable cards that she’s so good at getting start to be called and Nishida is completely overwhelmed by her sudden burst in speed.  Taichi explains that there’s some cards that Chihaya can hear the next syllable, so she’s able to get them faster than any other card.  By the end of the game, Chihaya manages to squeeze out a victory to Nishida’s surprise.  He then grabs his things and is about to leave, but Chihaya protests the fact that he won’t agree to join them right away.  Taichi tells her to leave him alone, but everyone is surprised to see the teacher that hates Chihaya so much show up (she’s the adviser for the tennis club) and yells at Nishida for not going home when he said he was.  Nishida surprises everyone by saying that he’s decided to quit the tennis club and join the karuta club.  Though surprised by this sudden decision, the teacher agrees and tells him to hand in his resignation form quickly.  Chihaya rejoices the fact that they’re now an official club and continues to call Nishida “Porky”.  This irritates him and he challenges her to another match of karuta, to which she happily agrees. 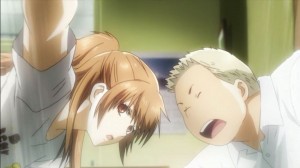 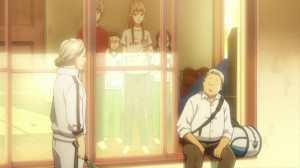 Opinions:  Although this episode started off a lot like the last two or three episodes, I was surprised at who they managed to recruit!  I hadn’t expected Nishida to be attending their school, though it’s a small area so I really shouldn’t be all that surprised.  Seeing that Nishida really hadn’t given up karuta in his heart and was only using tennis as a replacement seemed promising, though I can understand why he quit karuta in the first place.  Being beaten that badly by someone when he was so used to winning can be traumatizing on a kid.  Either way, the match between him and Chihaya was so intense I was on the edge of my seat through most of it!  The two will be amazing practice partners, especially to get Chihaya ready for the Class A tournament.  I’m curious to see how Nishida will react when he sees Arata again, provided Arata will make another appearance soon.  Lord, I hope he does…