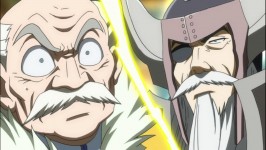 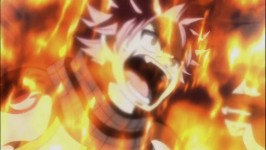 Note: The I’m a Fairy Tail Contest is still taking entries! Enter for a chance to win the First Blu-Ray or DVD Volume, as well as copies of the first manga volume! There are only 2 days till the deadline!

Despite having a major battle in it, this episode felt like more of a setting up episode than anything else. Nearly everyone ran into someone to battle, and the ongoing fights are going to be pretty intense I wager. There was also that little hint of something seriously awesome coming that I am personally very excited for.

And while talking about things to be excited for, I definitely was amazed at the result of the fight between Makarov and Purehito. I had expected Makarov to double K.O himself and Purehito as well, but Makarov barely stood a chance. The battle was over fairly quickly, with Makarov trying his best to keep up, but fallling pretty short. Purehito was just god-like, namely summoning up really powerful circles fairly quickly. In two attacks, the guy went from the 28th formation of Amaratsu to the 100th.

It was interesting to note, what Purehito’s logic behind falling to the darkside was. Simply put, magic had apparently originated from darkness, and the more pure the magic was, the more evil? I think its less a case of evil or good, but more of a case of absolute power corrupting anyone. Purehito apparently also met Zeref during his travels, and probably was driven insane by the extreme  power of the guy. On top of that, he seems like the scientist type, and apparently nothing is bad as long as its in the way of science, or in this case, magic. XD 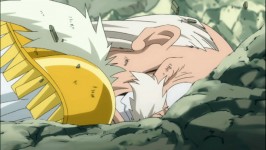 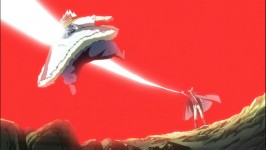 Purehito  defeated Makarov, and Makarov shouted out to none other than Laxus. It was interesting hearing the words “successor” (or roughly translated as Successor) come from Makarov as he reached out to Laxus. Given that Laxus was exiled from Fairy Tail, it does seem to mean that Makarov intended for Laxus to eventually come back and take over as the leader of Fairy Tail. Laxus’s little journey to discover himself has to happen first. Of course, with the very existence of Fairy Tail being threatened, Laxus may have to come back and step in. The prospect of seeing Laxus return, probably a lot stronger than he was before, is beyond exciting. I’m not sure if he’ll return, but I’m definitely sure that it would make for awesome story telling if he did. 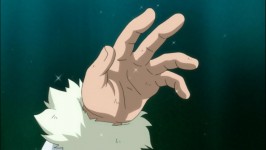 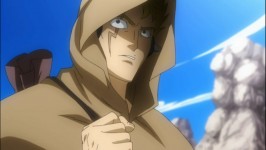 That said, most of the other Fairy Tail members also ran into their various enemies. Purehito mentions that all of them use lost magic, and a magic that is more close to the very pure type at that. Natsu, Gajeel and Wendy are the only Fairy Tail members with lost magic, so Fairy Tail is at a huuuuge disadvantage, even if there are two for each of the seven kin of purgatory. With Makarov already down, its all up to them though. 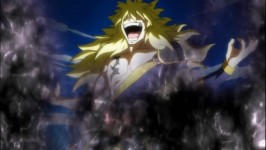 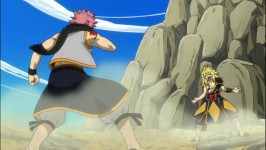 Natsu already encountered one of them, and a friggin god Slayer at that. Holy hell, that god slayer just seems like a whole new level of epic when compared to dragon slayer. Not only that, but the black flames can’t be eaten by Natsu. Natsu is in for some serious friggin hurt, and a tough challenge ahead of him. I’m sure all the other Fairy Tail members on the Island will have similar challenges. 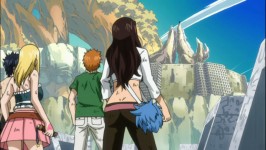 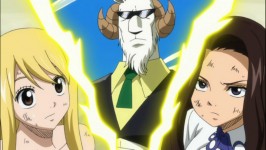 We have the team of Lucy, Cana, Gray and Loke taking on Capricorn, the goat glasses guy. It’ll be interesting to see how powerful he is, as he’ll be taking on 4 of Fairy Tail’s strongest on his own. Yes, Lucy is fairly strong with her Celestial spirits XD 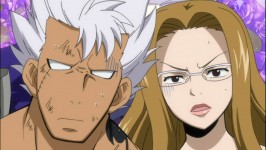 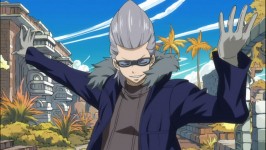 Then we have Evergreen and Elfman taking on Weirdo boy RustyRose. I’m curious to see what his power is, beyond spouting weird lines and annoying the hell out of his opponents XD 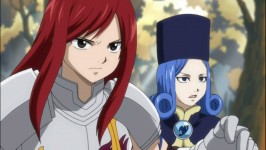 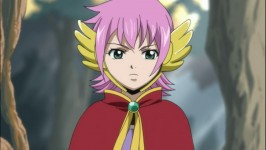 We have Juvia and Erza taking on Meldy, who seems to act like a real robot. I wonder if she’s an andriod? You know, brought to life with lost magic? Probably not XD 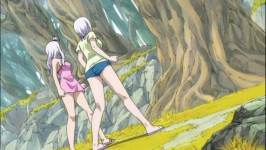 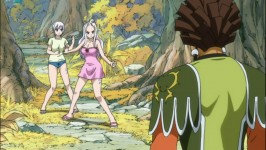 We also have Lisanna and Mirajane taking on Azuma, which does not bode well for them, at all. Azuma is one of the stronger members of the Seven Kin, and we kind of know how the fight ends thanks to the OP. It’ll be interesting to see what Mirajane attempts to do to stand up against Azuma.

I did find it funny that Fairy Tail ended on a shot of round, white and hungry float in the lake, the same one that Lucy and Cana were in earlier: XD 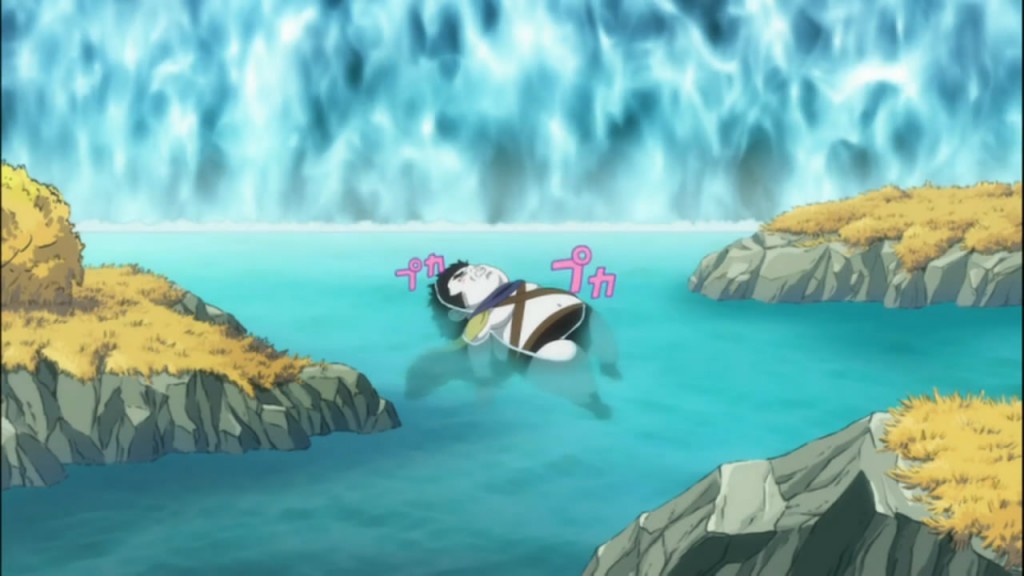 See ya all next week!

Seems its dragon slayer versus god slayer next episode. Natsu and Zancrow are going to duke it out! See ya all then! =D