I think it’s pretty safe to say that the anime ending of No. 6 was extremely disappointing. I am not kidding, seriously, BONES totally screwed it up. Yes, I am mad, EXTREMELY mad. It’s been almost a month and I still can’t get over my anger and anguish, hence the extreme lateness of this long due review. 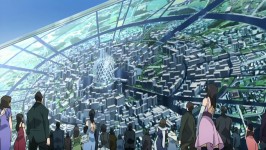 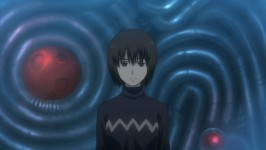 Summary: Nezumi and Sion manage to reach Safu and have a brief talk to her. They find out that Safu is already fused with Elyurias and that they can’t do absolutely anything to save her. Safu, as her last wish, wishes for their help in destroying the mother computer and hence destroying the correctional facility. Sion goes mad, grieving over Safu as he feels he came too late to save her. His anger turns to hated and madness as he is overcome with emotion. He takes the small bomb that Nezumi has and vows to destroy the correctional facility himself. 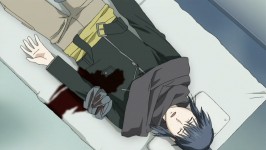 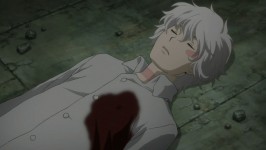 Nezumi tackles  Sion and tells him to calm down, reminding him about his “third option”. Sion, completely overcome with grieving emotions, spats back at Nezumi. Nezumi punches Sion and leaves him unconscious because he does not want Sion to taint his hands. Safu watches over the two of them and softly smiles. After activating the bomb, Nezumi drags Sion to the elevator. Just as the elevator is closing, Sion regains consciousness and screams at Safu to escape with them but the doors close and Safu is left behind.

After that, Nezumi has it in his mind that they need to escape but Sion is not cooperating. Sion blames Nezumi that he was only using him and Safu to get his revenge on No. 6. Nezumi, shocked and anger, lashes out at Sion that that is indeed true, no matter how false it is. Sion manages to see behind Nezumi’s lies and starts to calm down. However, a guard sees them and shoots, injuring Nezumi as he tries to protect Sion. 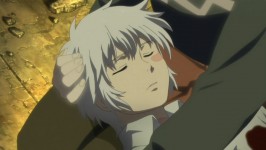 Heavily wounded, Nezumi is hanging between life and death as Sion operates over him. The scene plays out exactly like the scene when Nezumi saved Sion from the parasatic bee. Sion yells at Nezumi to open his eyes and live and Nezumi complies. After that, they try to escape, Nezumi heavily weaked. Just as Sion gets into the vent from which they can escape and reaches his hand out to Nezumi, he gets shot in the heart. Nezumi quickly grabs a hold of Sion’s hand and they both fall down the tunnel.

Waiting for them are Inukashi and Rikiga where the correctional facility is burning and falling apart. Not only the correctional facility, but also the wall that separates No. 6 and the West Block falls apart. They manage to escape to a safer location but it is all in vain. Sion is dead and they are all grieving, specially Nezumi. Inukashi says that they need to leave but Nezumi stubbornly stays behind as he crawls to Sion’s side. He sings his song to Sion, the hollow in his voice stinging with every word he sings. Just as Nezumi lays down beside Sion and begins to cry, Safu appears before them and also begins to sing. Sion is able to revive and Elyurias explodes. 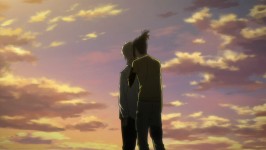 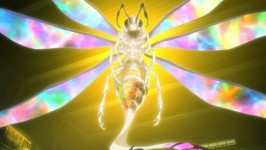 In the end, Nezumi and Sion part ways with a kiss. Although this is only on Nezumi’s part as Sion does not want to be separated. However, Nezumi asures Sion that he will be fine by himself (But what about us Nezumi?!). Nezumi leaves and Sion receives the small baby that he saved. With Hamlet and the baby with his side, Sion decides to move towards a better No. 6.

Impressions: The anime ending was a whole load of BS that I will never ever for the freaking rest of my damned life be able to get over. Am I mad? YES, I AM EXTREMELY, ENORMOUSLY, PAINFULLY MAD. Seriously guys, the anime completely blew the ending. They wasted a lot of precious time on killing Sion and then magically bringing him back to life. What the hell BONES, seriously, WHAT. THE. HELL?! You had an extremely good story with a FREAKING AMAZING NOVEL ENDING, why did you go anime original?! WHY?!

I hated the way they depicted Nezumi and Sion’s separation. Now, this is Fujoshi me talking but also Novel lover talking at the same time. The ending of the No. 6 novel was extremely bittersweet and beautiful in its own way. Nezumi and Sion parted but on good terms. Sion had practically begged Nezumi to stay, even going as far as saying that a world without Nezumi would have no meaning. Also, Nezumi did not immediately leave after they destroyed the correctional facility. When they were about to part, Nezumi explained that they could not be together because Nezumi was scared of Sion. However, in the end, Nezumi promised Sion that he would definitely come back some day. That was what the kiss in the end of the novel represented, a promise made between Nezumi and Sion to reunite some day. With that promised made, Sion gained faith and promised himself that the next time he saw Nezumi, he would not let him leave again.

As for Sion getting the baby in the anime…SERIOUSLY BONES, SERIOUSLY?! It was supposed to be Inukashi the one who kept the baby. Seriously BONES, it’s like you intentionally wanted to screw each and every character and the whole damned plot at the end. Now, we all know that Inukashi was extremely afraid of death. In the novel, Inukashi was the one to keep the baby. Thanks to the baby, Inukashi was able to grow as a person and able to find something to give her courage to live for. But nooo, Bones just had to give the baby to Sion. Besides, why the hell did the dog give the baby to Sion?! Sion was supposedly dead!  Dammit Bones, you just….ugh…I just can’t. I’m so angry. >.>

Also, don’t even get me started on Safu’s ending. Bones, you blew it. You totally blew it. Just oh god, Safu’s final moments and reunion with Sion were much more meaningful and deep than the anime even let out. Also, Safu was a pretty awesome girl in the novel, coming to terms that there was no way to save her but she still stayed strong.

Series Review:  As a whole, No. 6 was a good series. It was only the ending which completely lost it. The whole plot was great. Above all, the relationship between Nezumi and Sion is what really drived the story for me. I had never seen a more pure and precious bond than the one between Nezumi and Sion.  As for the separation that went on between them, I myself am sticking to the novel ending. From the bottom of my heart, I believe that Nezumi will come back once he is able to rid himself of his bad memories. Since he was so tied to No. 6, seeing it finally destroyed made something in him free. With his new liberty, Nezumi wanted to explore everything around him, lose the bad memories and begin a new life. However, he could not do that as long as he stayed tied to the No. 6 that he hated so much. But when he gets over his hatred, he will definitely come back to Sion. Besides, Nezumi takes his promises pretty seriously and he would never make a promise that he wouldn’t keep.

On another note, animation quality was good, specially the action scenes. The OST is precious in its own way, specially Nezumi’s songs and the melody that Nezumi and Sion dance to. Now, I know BONES couldn’t really do much with an 11 episode time slot, but I think they could’ve done better. I believe BONES wasted too much time on original anime stuff (Sion’s birthday at Safu’s house, Safu in her new school, among other stuff). Now, I do think that it was important to develop Safu’s character, specially since the poor girl ends up dying in the end. However, BONES could’ve cut some of the useless scenes that they inserted.

No. 6 is a wonderful series that should’ve been scheduled in a 24 episode time slot. As a 24 episode anime, No. 6 woud’ve been godly. Everything in the novel is pure genius and 11 episodes simply did not do it justice.

As my parting words, No. 6 ended at 10 episodes for me. Episode 11 does not exist in my mind. For those of you that really want to get the REAL No. 6 and its epicness, I highly suggest you read the novel.