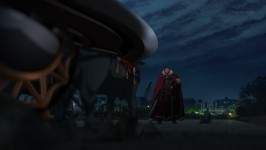 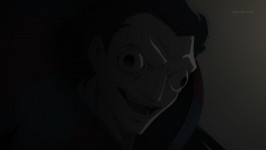 Episode 2 was the real test for this series. Could it hold up after that amazing one hour premier? Could it deliver the same amount of awesome story and character development, could it keep the animation and visual quality consistently good and would it be fine with just 24 minutes as opposed to 45? The answer to all of those questions is quite definitely YES! Yes, Yes, Yes, if the second episode is any indicator, this series may very well be the best this season, and may easily trump the original series and Unlimited Blade Works movie.

What was most surprising for me, was despite the fact that we went down to 24 minutes this episode, the episode hardly felt short. Not only did it feel substantial, but it didn’t feel rushed at all. The story is moving at a nice pace, and taking its time introducing new characters and developing the current ones, as well as leaving us some with some serious questions.

The episode openned  up with some interaction between Waver and his servant, who turns out to be none other than Iskander the Great, or as most people know him, Alexander the Great. The great conqueror that nearly conquered half the world? And he’s that annoying kid’s servant? What a darn waste…. or so I’d like to say. The choice of putting such an influential and great person with the pathetic Waver, was not only a great idea, but it really helps create  an interesting dynamic. Waver is clearly a kid who has no idea how to deal with life and the use of magic is definitely complicating things. Having to be with someone like Alexander is just the best thing that ever happened to him. 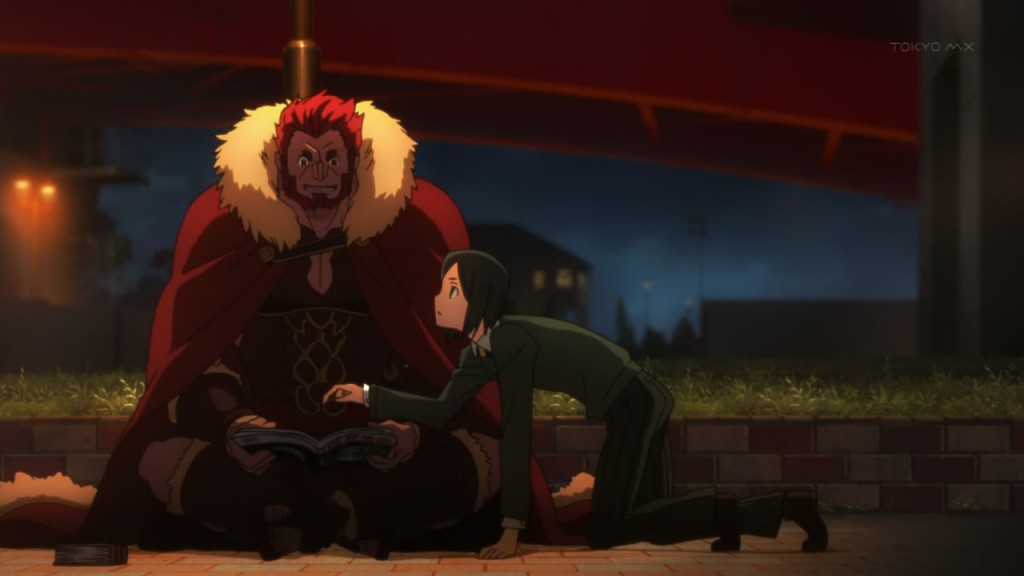 Alexander the Great looking up his old conquered territories

I guess this pairing really does home in on the idea that the Grail chooses masters based on whoever needs it the most. In this case, Waver needed to be in the Holy grail war to mature and become a better person. For him, the Holy Grail war is going to be more about the journey than the end. I doubt the end is going to be a successful win for him, but if he survives, he’ll come out a much better and stronger person

After showing off his awesome Chariot, Alexander and Waver definitely seemed to have settled in as a good team. I think both of them are going to benefit from this pairing up that the Grail has decided to make for them.

To return to interesting dynamics, I was very surprised to actually see the whole relationship with Kuritsurgu and his family, and of course, with Saber. Kuritsurgu got some serious development this episode, and from a few scenes at that. His interactions with his daughter, Illya, were heart warming and very cute. Little Illysviel herself was pretty darn adorable: 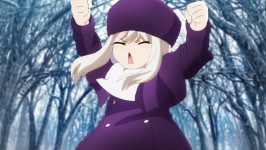 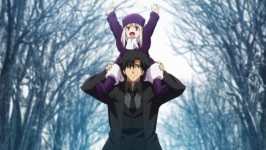 Its really sad to see that this cute little family is going to be torn apart in the future, and in the most brutal way possible. But if this scene put one thing on the forefront, it was that Kuritsurgu is definitely on the starting point of the kind and heroic person he’d eventually become. Not just with his daughter, but in  his thinking and how he’d inspire Shirou later on.

I talked last week about how different I thought Kiritsurgu and Shirou were, but this week we actually got to see some similarities between the two of them, and it was related to Saber. Both definitely didn’t react well to Saber being a woman, for nearly similar reasons. I loved the explanation Irisviel gave about what Kiritsurgu was thinking. The fact that he was pissed off at how King Aurthur’s friends and comrades had forced her to become a king and abandon her gender, was definitely something that later, Shirou would feel pretty similarly about. It was nice to see not only that parallel in Kiritsurgu, but we also got to see just how much serious and prideful Saber was before she became Kiritsurgu’s servant.

Given, Saber is pretty prideful in Fate/Stay Night, but she’s definitely a lot better at dealing with people then than she is now. I’m sure the meeting with Kiritsurgu definitely gave her some serious maturity and experience as well 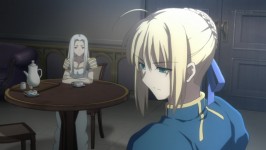 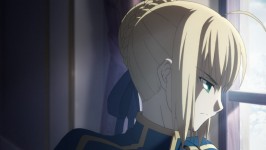 I’m glad that Irisviel is going to be around. The dynamic that forms between the kind and cheerful and mature Irisviel, the prideful and slightly immature Saber and the cold-hearted, mature Kiritsurgu is definitely beyond interesting.

Beyond that, we got to see a new character set this week. Uryuu Ryuunosuke, is perhaps the most interesting closest thing we’ll get to a true frigging evil character. The guy is a psycho killer and gets paired with the most effed up companion other. I’m not exactly sure who Bluebeard is exactly, but given the spell books and summoning friggin Cthulu to kill that kid, he’s definitely some sort of black magic caster. Well, he is caster class an all. 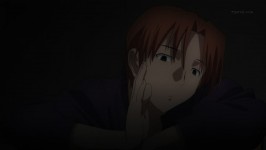 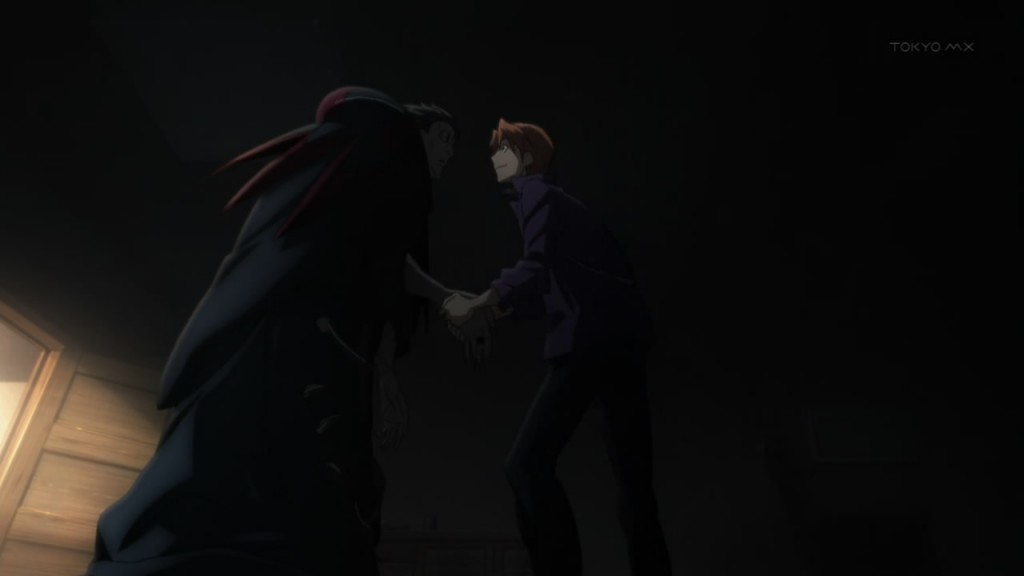 Good God... A pairing made in the depths of Hell!

It was in this introduction, that was primiarly extremely creepy, that we got to see more of just how dark Fate/Zero is. We had a kid watch his parents get killed by a psycho, then see a friggin monster get summoned, get released and then killed just as he found a glimmer of hope. Totally… friggin effed up. What made it creepy was how happy Ryuunosuke was at seeing what Bluebeard did.  A match made in Hell I guess XD

Speaking of weird and effed up, the final scene in the episode was definitely very surprising. Kirie decided to kill off his supposed ally already, and sent Hassan on an impossible mission. I suspect that this was meant to be a test of Gilgamesh’s abilities more so than anything else, because I doubt Kirie is stupid enough to expect that Hassan would be able to take down Gilgamesh. The fact that he went as far as to misinform the guy, saying he didn’t have to worry about Archer at all, goes to show how unserious he was about the whole thing.

It was still pretty badass seeing Hassan make it through all those barriers and stuff. But Gilgamesh stole the show by totally decimating him: 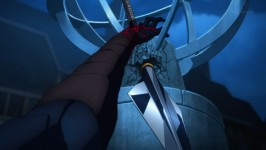 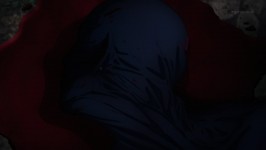 Wow…. was that super friggin intense. Gilgamesh seems a bit more arrogant and cold hearted, but he doesn’t seem to have the sick hobbies he does in Fate/Stay Night just yet. 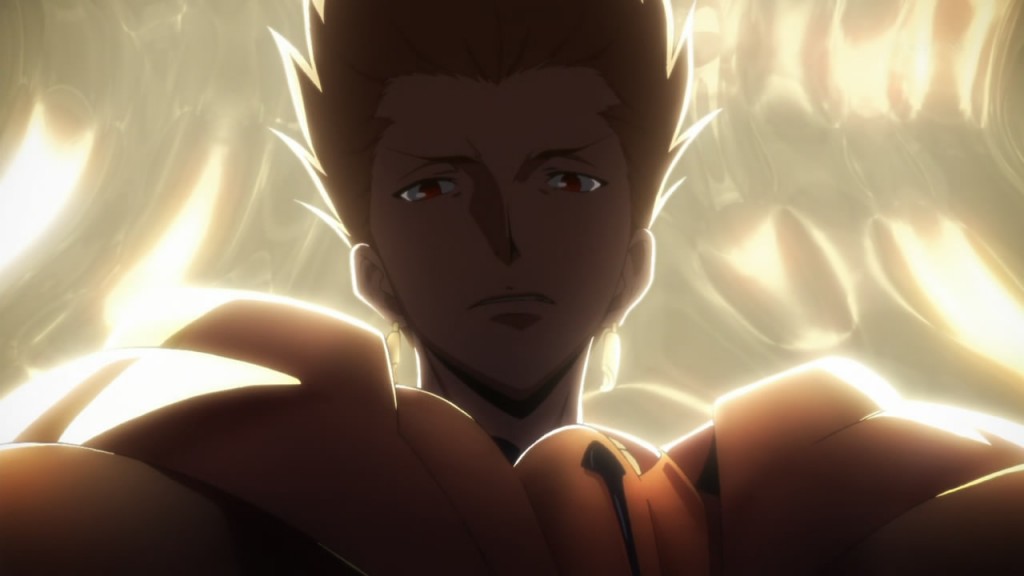 Don't miss with the King of Kings!

All in all, amazing episode, and I cannot wait for the holy Grail war to actually get under way! =D

ED [Memorial] by Fumio Yosuda: (A)

Pretty solid ED. I like the song, which is a perfect companion to the OP. The images showing all the different servants in their pasts are pretty sweet and a nice added bonus. Definitely a very good ED theme!

Next week seems to signal the start of the Holy Grail war! See you next week!