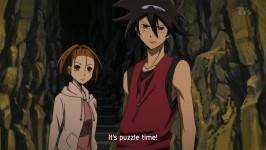 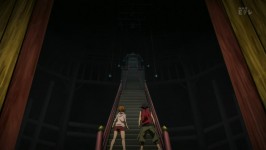 This latest series from sunrise is a sort of High Schoolers solve death puzzles series. It kind of reminds of Spiral, and it kind of reminds me of YuGiOh! Both are series I enjoyed, and this little mix and mesh is a nice combination. If anything, I felt like the art style seemed like something from the 90s. It definitely reminded me of old series like Onegai Sensei and Cowboy Bebop (which is even older) and what not. Very interesting little series that really kind of reminds me of the good old days before the moe boom happened, and literally EVERYTHING started looking the same.

I’m not exactly sold on the puzzles aspect, as they don’t seem to have as much logic to them, as they are more or less very complex things that the main character can solve with his new found power. I’ll definitely be watching this series, but its too early to tell if its good enough to follow and recommend.

This definitely felt like it had an older feel to the animation style. In terms of the series itself I think it was an ok way to get started. The apparent female lead actually proved useful which was a nice thing to see. Will be good if characters work together to figure out different aspects rather than the lead just puzzle haxing the solutions. Puzzles aren’t really my thing which might impact enjoyment in the series. A scene where he solves a bunch of puzzles in a row didn’t really reach me since I wouldn’t have done those puzzles anyways. They’ll have to make sure that how the puzzles get solved are shown and logical, since if we just see the character solving it without showing anything it will get old.

It could be a good series if handled right. Still have to say that having an interest in puzzles probably wouldn’t hurt when watching. A start that at least encourages watching some more.