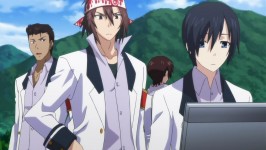 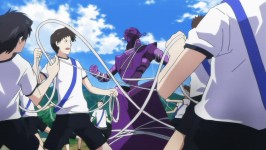 Kawakami City is famous for its strong dedication to its samurai ancestors. A healthy fighting spirit is always valued and it’s even an important factor for success at school. The series tells the tale of Yamato, a second year student from Kawakami Highchool who wants his childhood friend to like him. In order to do so, he wants to prove himself by fighting in the various samurai theme reenactment battles in his school and win.

This is one weiiiird series. It rips everything from characters to setting to basic plot elements from other series, and does it to create a jumbled mess of wtf? This series features a school where every issue is settled by reenacting classical Samurai battles. (Uhh…. whaaaat??!?!?) The armies have everything from maids to friggin ROBOTS! Then there’s the classic Oneesan type character that the main character is into while also having a harem of other chicks that are equally into him….. AAAAH! *brain explodes*

This is probably my least professional sounding impressions post on a series, and thats a testament to how effed this show is. There is some awesome voice work, but even talented seiyuus can’t save this show from its own sillynness and stupidity. I am definitely not interested in this XD