Kamisama Dolls is one of those series that really just doesn’t understand what it wants to do. It really can’t decide who its main character really is, and it can’t decide what aspect of its story it really wants to focus on. It also can’t single out one of its numerous ideologies as its main theme. What is shocking though, that at the same time, this uncontrolled, unfocused and indecisive jumble of various elements comes out to be one of the more entertaining shows of the Summer 2011 season of Anime shows. 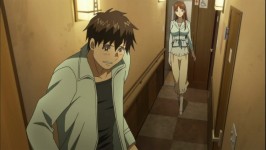 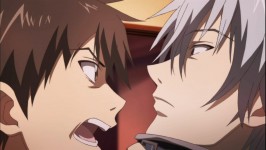 If there was one major theme that one COULD pin down and maybe attribute to the series it would be the growth and development of eventual series main character Kyohei Kuga. The whole 13 episodes series can actually be called one big introduction and coming of age like story for Kyohei. It just takes the show pretty much most of its episodes, right up till the last two, to really spell this out and possibly decide on it.

The story starts off  by following Kyohei Kuga, a member of one of the leading families of the Kurakami village. Kuga has, due to some dark and troubled past, left the village and now studies at a college in Tokyo. The story literally starts with Kyohei’s life as a college student being laid bare and then suddenly being turned upside down when he and his potential love interest Hibino encounter an elevator full of dead bodies. The story takes a turn for the worst when Kyohei finds out that the person responsible is an old friend from his past, Aki. 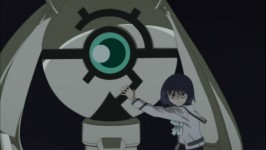 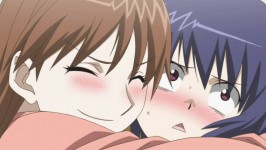 It is soon after, that we are introduced to Utao, Kyohei’s sister and the current seki of a Kamisama Doll named Kukuri. The series main plot device is introduced, in the form of the Kamisamas (Translated as gods) who are actually robot like dolls made of wood and have unique and powerful powers. They also are tied to Seki, people from the Kurakami village that control the Wooden gods and use their powers for their own ends. Kyohei and Utao are both from one of the more powerful families of the village, and are hence, given the right to control and use the Kamisama Dolls.

The introduction of Utao, who actually received Kukuri after Kyohei relinquished his right to it, is where the series starts to really feel odd. The series itself can’t decide whether it wants to focus on Kyohei or Utao as the main character. At one point in the series, Kyohei actually takes a bit of a backseat and Utao’s character and her own issues and problems take front and center.

At the same time, we have a parallel story of Aki, first thought to be the series main antagonist who later turns in to more of a misunderstood Anti-Hero of sorts. The story then tends to try and focus on Kyohei and Aki, and their relationship. Related to Aki’s story, is none other than Fuuko. The daughter of a Police detective, she works to unravel the mystery surrounding the Kurakami village and the Kamisama Dolls. There’s also the main heroine Hibino, which acts like more of a relatable outsider to the whole mess and along with the viewers, slowly begins to discover the dark past behind Kyohei and his village. She also slowly begins to develop romantic feelings for Kyohei and because of Kyohei’s own affections for her, suffers the brunt of his enemies’ wrath. 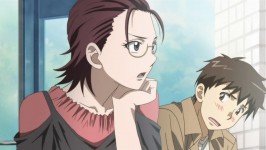 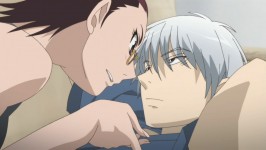 If it’s not clearly evident from the above outline of some of the story’s plot elements, the plot really is an unfocused mess. At the same time, it can hardly be said that the series isn’t a good one without an interesting story to tell. The story actually is interesting, there’s a good deal of plot twists and a very cool mystery that the series slowly reveals. The real issue, is that Kamisama Dolls actually sacrifices some of its story telling cohesion and focus in service of its characters.

The cast of characters in Kamisama  Dolls is great, and a big part of what the story does is develop them and mature them. As mentioned earlier, the whole series can be considered a coming of age story of sorts for Kyohei. After experiencing a dark and traumatic event, Kyohei runs away from it all and the series is pretty much him going under fire for that decision and realizing what he has to do. Aki gets his own development as he realizes what drives him and why he behaves the way he does. Hibino realizes that she might actually have feelings for Kyohei, Utao deals with her own responsibilities and even the fact that she may be an elder sister. All of this character progression is really hit home with a backstory that echoes why these characters were so confused in the first place. Kamisama Dolls is all about its characters and literally throws everything out of the window to make  sure they get every bit of development that it feels they deserve.

While the characters are amazing and great, a big problem that perhaps many people will find is in how the series handles its eventual main character, Kyohei. The series throughout eludes to the fact that Kyohei is actually pretty amazing and that he just is too afraid of his own power to really come out and assume the mantle of the hero. Kyohei adopts the mask of a shy, nice, almost doormat of a person, for most of the series. All the while, every character sees and refers to him as the clear superior. It’s not until the very last scene of the show, that the viewer gets the ultimate payoff and sees Kyohei really act amazingly badass and cool. And then…. THEN, we get the whole “To Be Next Story” signaling the classic “read the manga or await a season 2 for the good stuff” ending. 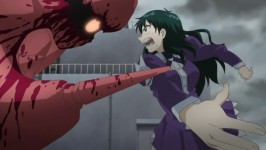 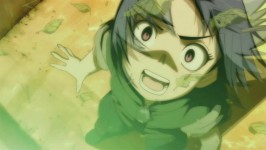 That really is the only other problem with Kamisama Dolls. Like many anime series these days, it fails to provide a proper conclusion to the story. In many ways, the series just heads to a climax and lets the viewer go, the minute things go from “interesting” to “amazingly awesome”. The series can indeed be considered a coming of age story for Kyohei . It can also, however, be considered to be a very grand introduction to the world, characters and setting of the franchise itself. Kamisama dolls introduces some very interesting questions and mysteries, unravels them, entices you with the characters and then acts like a tease and runs away just as things get super exciting.

Is Kamisama Dolls a great show on its own? Possibly. If there’s no second season, than Kamisama Dolls feels like a series with a ton of awesome characters  and a huge amount of potential that is only really hinted at or given minimal exposure at the very end. 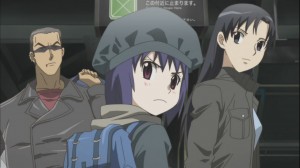 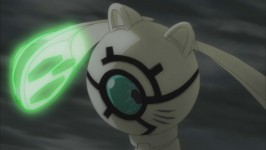 Is Kamisama Dolls going to entertain you and keep you on the edge of your seat? THAT, is a definite yes. With an engrossing and interesting bunch of characters, a very intriguing story, and multiple plotlines running in tandem, Kamisama Dolls is a very exciting show. The series deals with the issue of Kyohei’s past and greatly develops and matures his character. It also deals with Hibino and Kyohei’s developing romantic interest and resolves it to a degree that most slice of life or love comedy series rarely even bother to do, in twice the amount of episodes. The small payoffs are there, but like many series of this type, everything really feels like a prequel to the main event.

On the issue of Production values, Kamisama Dolls does a pretty good job. The art is a merger between simple character designs with really basic shapes to model the forms of the characters and their features, and some really complex background and extremely dramatic angles. The action scenes and general animation is extremely well done and a beauty to look at. On the visual side, Kamisama Dolls looks very very amazing and actually has a good deal of cohesion that is otherwise absent from the series in general.

The sound is also pretty well done, with a competition if somewhat forgettable OST. The ED theme is actually pretty good, while the OP theme leaves something to be desired, if only when compared to the ED. The voice actors do a very amazing job, especially those of Kyohei, Utao, Aki and Hibino. Nearly everything in terms of sound is very well done as well. 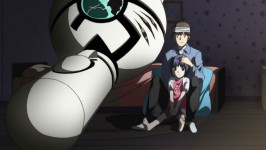 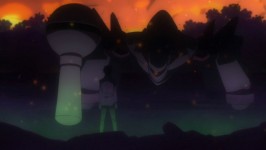 All in all, the series gets a sort of hesitant recommendation. Should we hear of a second season, there will definitely need to be some revisions to that opinion. Until then, we recommend this show to anyone who enjoys an exciting show with engrossing characters but is okay with dealing with some disappointment and a cliffhanger ending at the end. Kamisama Dolls gets a B Grade!