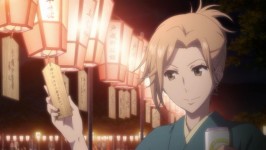 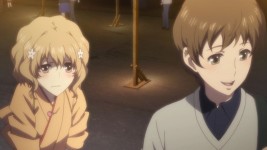 Well, this is it.  The finale and the one episode we’ve been waiting to see.  Will Ohana finally confess to Ko?  Will he accept her feelings?  Most importantly, is the Kissuiso going to be closed after all?  Let’s find out!  The episode picks up where we left off last week; everyone is watching the Bonbori festival in awe when Ohana receives a text message from Ko saying that he’s arrived.  Ohana excitedly tells everyone that Ko’s arrived and is about to take off when she pauses and asks about everyone’s wishing plaques.  Tohru and Minko smile (along with everyone else) and hold up their wishing plaques.  They tell her not to worry and to go pick up her friend from the train station.  Tohru offers to drive Ohana, but she’s already long gone and busy weaving around people trying to get to Ko.  As she makes her way across town, we see a procession following the path created by the lanterns and a girl (probably picked by the town) representing the Goddess that follows the lights home.  Ohana eventually finds Ko and they stare at each other from opposite sides of the street while they wait for the procession to finish (oh God, the UST. UST EVERYWHERE.).  Once they’re finally able to join one another, Ohana begins saying something but ends up blurting out that she wants yakisoba.  Ko laughs and they head towards a yakisoba booth, all while Ohana mentally berates herself for being unable to confess like she wants to.  They eventually find a booth and Ko orders for Ohana before saying how he likes yakisoba from a stand much more than ordering it at a restaurant because it just seems to taste better.  Ohana suddenly blurts out that she loves Ko, much to his surprise (and happiness, I’m sure) and the cook chuckles as he hands them their order.  Much to the two teen’s embarrassment, the yakisoba is shaped like a heart.  Cue the awwww’s.

Meanwhile, Ohana’s mother and grandmother are following the path of the lanterns and Ohana’s mom is laughing at a few of the wishing plaques.  Her mother scolds her and she justifies it as being fun to read what other people wish for.  She pauses and points one out to her mom; turns out Ohana wished to become more like her grandmother.  For the first time in a long time, we see Ohana’s grandmother look genuinely touched by something Ohana has done.  Elsewhere, Minko is placing her wishing plaque on a board along with others and Nako takes a peek, telling Minko that her wish is a good one.  This embarrasses Minko, who only becomes more flustered as Yuina appears and decides to tease her about it.  As the trio walk away (with Minko calling Yuina a balut) Tohru walks up and places his wishing plaque next to Minko’s.  Turns out, she wished to be able to become a chef and catch up with Tohru.  Tohru smiles and says that she has a long way to go, but he can’t wait to see if she does catch up to him or not.  As everyone continues to enjoy the festival, we get a neat little narration from Ohana’s grandmother.  She reveals that she’s happy that Ohana wishes to be like her and that she’s ready to surrender her dream of running an inn and simply be content with her family instead of forcing her dreams on them.  Later that night, everyone returns to the inn for dinner and Denroku thanks everyone for their friendship and love over the years, especially Ohana’s grandmother.  He tells them that he’s excited to spend time with his children and grandchildren, but he’ll never forget the memories he’s made at the Kissuiso.  Everyone thanks him for being such a good person all these years and the festivities begin! 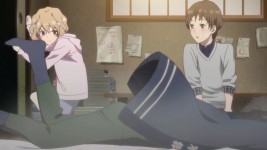 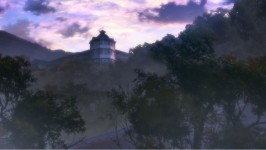 Oh, but wait!  First, Enishi has something to say.  He tells his mom that he agrees with her decision to close down the inn, but only temporarily.  He promises to go to school and learn how to properly run an inn and asks for her permission to re-open Kissuiso.  As almost an after thought, he asks to keep the name “Kissuiso” and his mother agrees, much to his delight.  Okay, now let the festivities begin!  After dinner, Ohana shows Ko to his room (which looks like he’ll be bunking it with Jiro) and instructs him on how to unfold his futon the “proper” way.  The two have a short conversation, mostly with Ko telling Ohana he’s happy that she’s in love with him and that he returns her feelings.  He then begins to start asking her if she would like to date him once she moves back to Tokyo, but is interrupted when Ohana suddenly flings the closet door open and Jiro comes tumbling out.  She scolds him for eavesdropping and Jiro whines that it’s his room too and he can do what he wants.  Ohana returns to her bedroom where Nako is sleeping over again and surprises her friends.  They thought that she would be sleeping in the same room as her grandmother and mom, but she said that she’d rather spend the night where she belongs in the Kissuiso.  Early the next morning, the girls are returning from the convenience store and start talking about what they’re going to do after the Kissuiso closes.  While they all have different ideas, they all agree that someday they’ll return to the Kissuiso and be the best staff it’s ever had.  Later, all of the guests head out and everyone continues their usual tasks, though there’s an air of sadness surrounding the inn.  As the day draws to a close, Ohana’s mom leaves and asks her mom to come stay with them in Tokyo.  Her mom says no because she wants to live out the rest of her life working at a friend’s inn as a waitress.  Ohana’s mom seems a bit disappointed, but agrees with her mother’s decision.

Soon, everyone parts and heads their own ways after thanking Ohana’s grandmother profusely for their time together.  After everyone is gone, Ohana’s grandma wanders around the inn, remembering all of the times that she spent with her staff.  It was a downright emotional scene, watching her make her way through the inn and remembering everyone.  When she finally is about to say goodbye to the inn, she hears Ohana outside.  Apparently Ohana missed her train and since the next one doesn’t come for a few hours, she decided to give her thanks by polishing the floors one last time.  This seems to bring tears to her grandmother’s eyes, but we can’t really tell because Ohana is blocking our view.  Her grandmother takes her to the train station and as Ohana is about to leave, her grandmother hands her Denroku’s logs.  She asks Ohana to continue keeping Denroku’s logs when she comes back and Ohana is touched by this.  She promises to come back and to make the Kissuiso even better than before, but while still keeping the memory of when her grandma ran it alive.  The train leaves, leaving Ohana’s grandmother alone as she bids farewell to her only grandchild.  As the ending credits roll, we see a small montage of what everyone is up to after the inn closes down.  Enishi and Takako are helping out at Yuina’s family’s inn and Ohana’s grandmother appears to be a waitress there.  Nako is teaching small children how to swim and looks rather happy there.  Tomoe is now a waitress at a bar/restaurant and it looks like she’s being hit on by a man, but gets scolded for slapping the man in good nature.  Ren looks terrified to start his new job, but seems to already be commanding respect.  Minko is pleading with a restaurant owner to take her on as an apprentice, but when he’s about to say no, Tohru appears and asks for a position for himself and Minko.  The owner agrees, leaving the duo looking rather happy.  Yuina is studying for school in France and appears to be keeping herself motivated by trying to prove herself to Ohana.  Finally, we see Ohana getting ready for school and looking genuinely happy.  It looks like she’s dating Ko and she loves it, but she’s also anticipating the day that Kissuiso re-opens so she can take her place at the one place she truly belonged. 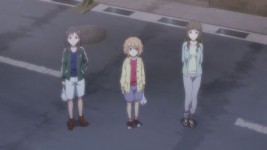 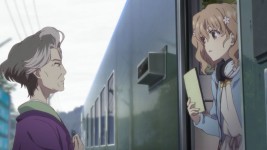 Opinions:  For a finale, this sure was emotional for me.  I spent a good portion of the episode trying to force myself not to get choked up and failed miserably.  Seeing Ohana’s desire to be like her grandmother was touching, but I think it was seeing Sui walking around the inn after everyone had left and reminiscing is what really got to me.  I’m glad that Ohana finally confessed to Ko and that they appear to be dating one another.  It’s about damn time, man!  I really have to admire Ohana’s determination to return to the Kissuiso as well as Enishi’s determination to really take the time to learn how to run an inn properly.  Denroku was adorable as always and seeing him with his grandchildren was incredibly sweet.  Plus, seeing Minko and Tohru working together again at another restaurant revitalized my hope that they’ll end up together some day.  Overall, this was an excellent finale to an equally excellent show.  They wrapped everything up nicely, which is a bonus, though I would have liked to see everyone return to the Kissuiso someday.  Even if it was a little omake or epilogue at the end of the episode.  But then again, I like the way they ended it; everyone was moving on, but in turn, bettering themselves for when Kissuiso re-opens and they can return.  Definitely a great show and the finale was excellently done.