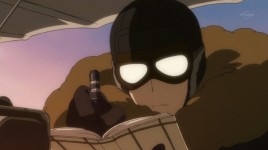 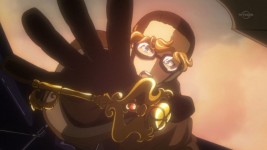 This week’s episode is one major flash-back of sorts, but it definitely puts a lot of things in perspective.  Although it does fill in a few gaps in terms of information, it’s still a lackluster episode and I wish that we could have learned a bit more about the yomihimes themselves.  The episode starts off in Norfolk, England in the year 1917 and the first thing we see are two planes zooming around in the sky.  On the ground, a young cadet rushes up to his commanding officer, informing him that one of the people in the planes is cornered.  The commanding officer – who we later find out is named Ilas – watches the two men in the sky and asks who’s cornered.  The cadet anxiously informs him that it’s Lieutenant Wellings, which shocks Ilas.  We get another look at the two men flying and we see Huey is in one of the planes (cue me squealing in delight like a little kid in a candy store).  Once the two men land, Ilas summons Huey and Huey looks determined as he greets Ilas.  Ilas is writing in a book about something and starts rattling off the controls of the plane, such as if you let go of the control stick, you’ll go into a barrel roll.  Huey doesn’t look amused by all of this and states that he’s determined to beat Ilas’ record.  Ilas chuckles and says that it’s not always a good thing to count the amount of people that you kill.  He then points out that underneath his hard and stern exterior, Huey is really a nice person and that he should try not to lose that part of him during the war.  Huey seems to relax a bit at Ilas’ comment and Ilas introduces himself, though he already knows exactly who Huey is, and the two become fast friends.

Fast forward a year to Aisne, France 1918 and we see several fighter pilots cruising through the sky.  Suddenly, one man becomes terrified as a plane flies behind him and he murmurs that it’s the Faceless Phantom.  The man behind him begins reciting a poem (or maybe it’s just him narrating/thinking it, I’m not sure) and shoots him down.  We find out that it’s actually Ilas and he shot down a comrade.  Huey flies up behind him and takes aim, hoping to just startle Ilas and keep him from attacking any other comrades, but Ilas soon turns his sights on Huey.  Huey bobs and weaves, trying to avoid Ilas’ fire, but the golden key (the one we know that allows him to unlock the Bibliotheca) falls off of it’s perch on his plane.  Panicked, he lets go of his control stick and manages to snatch the key out of the air before he loses it; because of this, he manages to spin into a barrel roll and avoid what would have been a sure death via Ilas.  Later, we see Ilas in a bar talking to a man with long, blond hair in a braid about the war.  The bartender seems to know quite a bit about war, but that doesn’t seem to bother Ilas.  Ilas talks about his love of the sky and the anthology he’s working on (the white book he never leaves out of his sight), which intrigues the bar keeper.  However, as he starts talking about the city they’re in, Ilas is overcome with a strong headache and passes out. 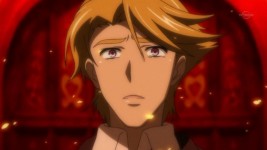 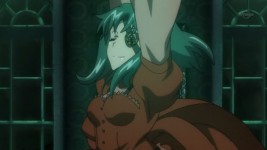 In what could be a flashback or a strange dream, Ilas is horrified to see that the entire city is on fire and everyone is dead around him.  He eventually wakes up in a bed – likely in a hotel room – and is disoriented.  As he looks around the room, he sees a young girl standing in the corner.  She has an eyepatch and I instantly recognized her as the same yomihime that Han is searching for, though Ilas has no idea who she is.  She begins dancing around the room, asking Ilas if he knows about Phantom Books.  When Ilas replies in the negative, she informs him that they’re books that can give a man incredible power.  She then asks him if he knows how Phantom Books are created and when Ilas says he has no idea, she continues on by telling him that they’re created by people who pour their anger and hate and other intense emotions into it.  Ilas asks her if that means his anthology is a Phantom Book and she says it isn’t yet, but it’s an egg of sorts.  She says that wars create a lot of intense emotions – specifically rage – so it’s perfect for creating Phantom Books.  Ilas has been pouring so much energy and emotion into creating his anthology, that it’s nearly a perfect Phantom Book, but it needs a little more work.  Ilas then falls back asleep and the yomihime disappears after encouraging him to finish creating the book.

Some time passes and we see yet another group of fighter pilots cruising through the air, shooting down their enemies.  As soon as the coast looks clear, the men begin to celebrate, but their celebration is short lived.  Ilas – or the Faceless Phantom – shows up and starts gunning people down left and right.  As his rage increases, he somehow creates a monster-like thing and just swats the opposing planes out of the sky.  However, just before Ilas is going to be consumed by all of his anger and hate, Huey appears and calls out to Ilas.  He then reads the poem that Ilas wrote about his own flying, and that seems to snap Ilas out of whatever it was he was consumed with.  Huey regretfully then shoots Ilas out of the sky and watches as his plane crashes before flying away.  The yomihime and her key keeper (who turns out to be the bartender from France) appear and watch Huey fly away.  Ilas somehow manages to make his way out of the rubble of his airplane unscathed, but the yomihime bounces up to him and pushes him over with a single finger.  She then reveals that Ilas died years ago in France during a bombing, but they brought him back to life in the hopes that he would complete his Phantom Book.  But since he wasn’t able to, they inform him that hey have no need for him to remain alive anymore.  Ilas then begins to scream and passes, saying that all he wanted to do was fly.  The yomihime and her companion return to watching Huey fly away and the key keeper wonders aloud if Huey was a key keeper or not, since he was able to successfully read an unfinished Phantom Book.  Just before the credits, we see Huey land at his base and Armand runs up to him, informing him that he has a letter awaiting him.  And that’s how Huey came to meet Dalian and become her keeper. 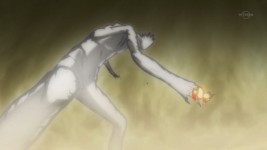 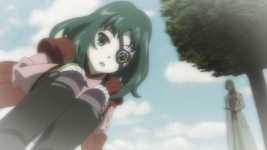 Opinions:  While we did learn a lot about how Phantom Books are made and got a bit more of an insight into Huey’s past in the military, it wasn’t an exciting episode.  Sure, the action was fun to watch and it was definitely interesting to learn a little bit more about the Phantom Books, it just wasn’t the greatest episode ever.  We still have no idea who this yomihime and her key keeper are and what their goal as a whole is.  Considering next week is the series finale, I’m not entirely sure what to think.  I’m intrigued about next week’s episode, but I wouldn’t exactly say that I’m excited to watch it.