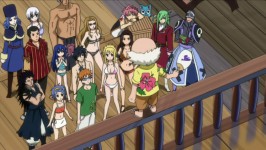 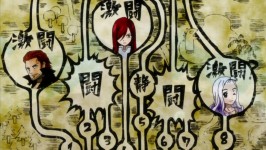 The S-class Advancement Arc continues… And wow does it start without pulling any punches. We get straight into the thick of things, with two sets of the most highly anticipated characters already duking it out. Tbere’s also the usual dose of fanservice, which seems to have really been raised since this arc started.

As with last episode, this episode start with some Lucy service. Wow, Lucy really does get used a fanservice icon a lot these days. Its still pretty hilarious that no one actually finds her attractive in the actual series. We also had some fanservice from other characters, since apparently its very hot near the Island: 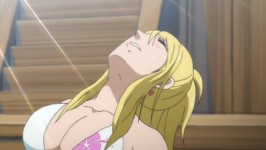 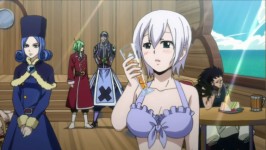 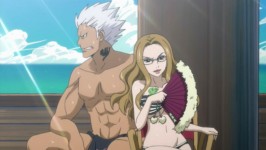 We also got some Gray fanservice, where he barely wore a stich on. If anything, I’m sure Juvia was beyond pleased, but I do have to wonder how nearly everyone else onboard was fine with it too. I guess they’ve seen it sooo many times it become common place? O_o 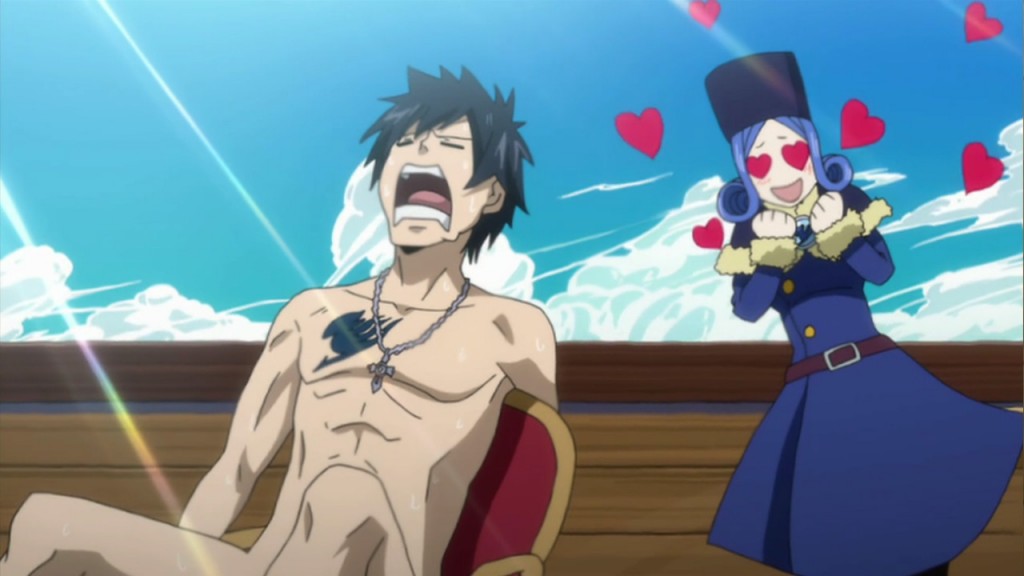 It was interesting to note that, as everyone got to the Island, it was pretty much “every team for themselves”. Even nice characters like Levy and Lisanna trucked along and made it so they could get to their first objective first and get some manner of advantage.

The first trial began with this episode, and I’m beyond excited to see what kind of battles we’ll get to see. Essentially, the first trial was a bunch of pathways that lead to the next objective. The real twist was the blockades in the middle, which ranged from two teams facing off against one another, or even worse, having to battle one of the current S Class mages. 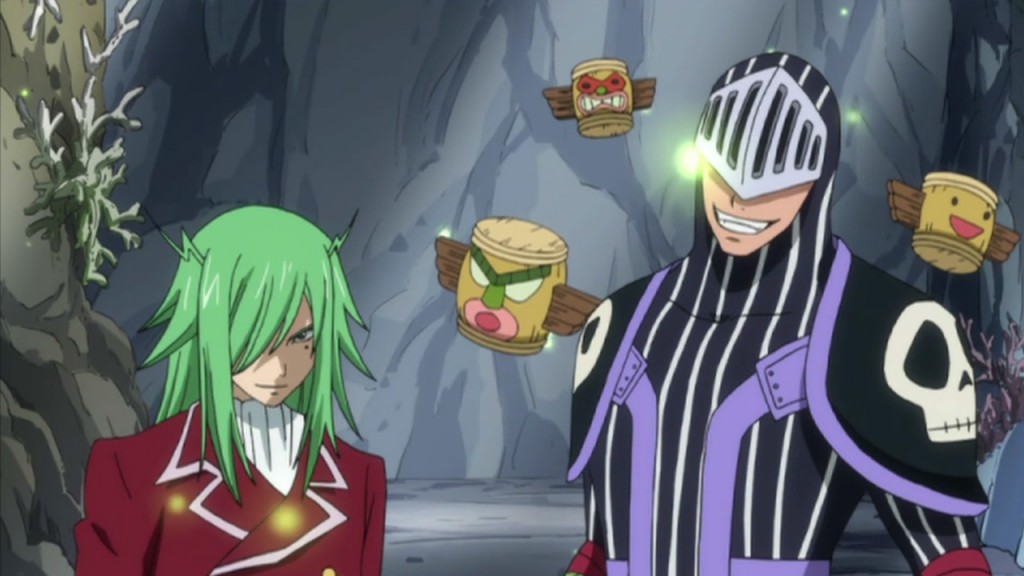 The story mostly focused on Cana and Lucy this episode, with them getting through their first trial by pure luck. It was interesting to see that Lucy claimed she was lucky (which is usually very true) only to be shocked that she and Cana ran into Freed and  Bickslow. 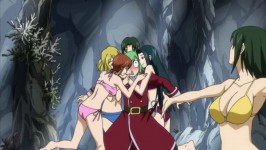 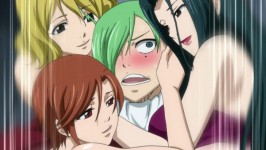 Now personally, I was expecting the whole Freed has a weakness for girls to be an actual character trait. It was interesting to note that it wasn’t and that Freed basically threw the fight. I definitely like that Freed recognized that he did some damage during the battle of Fairy Tail, and that he wanted to make amends for it. If anything, this little battle gave Cana and Lucy a much  needed confidence boost. Its not stretch to assume that they are the most weak out of all the teams, and they really need to believe in themselves to be able to make it through what will be one of the toughest battles in their lives.

This whole battle also gave an excuse for Lucy to finally use Ares as well get more Bikini fanservice, and we even  got some Virgo fanservice: 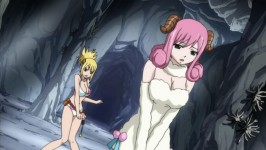 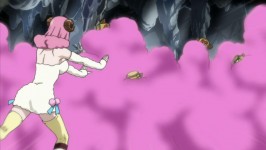 All in all, Lucy and Cana  moved to the second round, and Freed ended up giving up on S Class in the very first round. In essence, the strongest contender for the S Class title has been booted out, and I think all eyes are on Mest now. I’m curious to see how exactly Mest fights, as we all can assume that he has some sort of teleport ability.

The Lucy and Cana stuff was cool, but the episode ended on one hell of an awesome cliffhanger. We had Natsu go through the E route to find Erza, only to run into none other than Gildarts. GILDARTS! Right off the bat we have a hell of a tough fight for Natsu. Natsu may be the main character, but he ain’t getting it easy at all. To face the Gildarts for which the very buildings of Magnolia move out of the way? Lets just say its going to be quite intense. 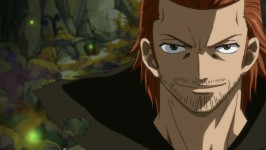 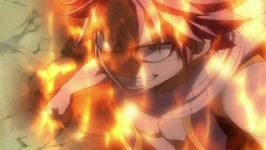 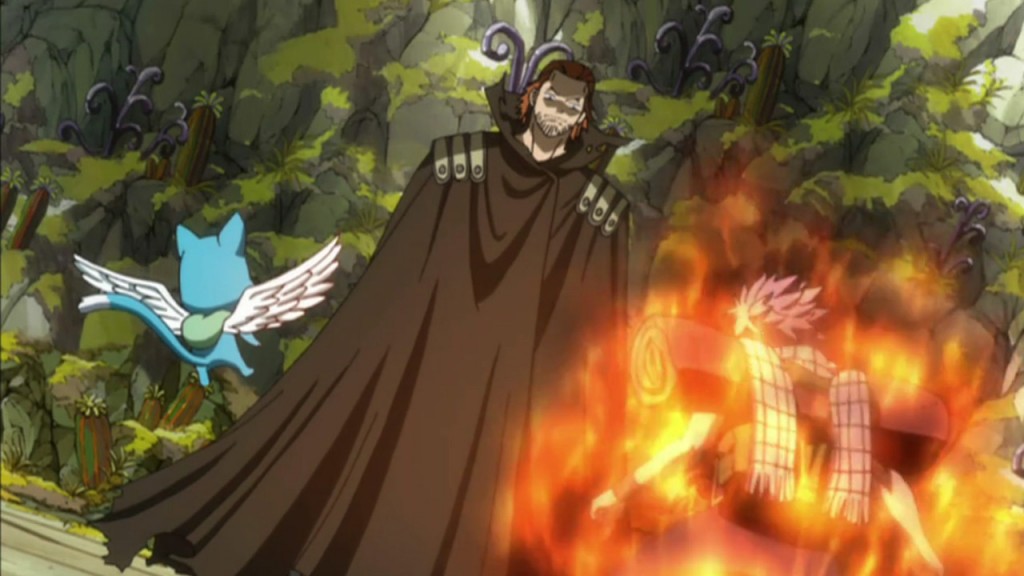 Like I said before, this new arc is not pulling any punches, and I cannot wait to see how this proceeds. 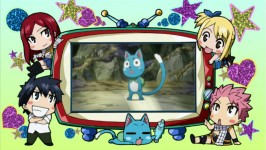 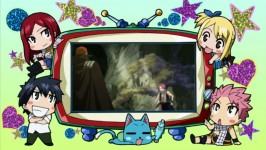 Natsu versus Gildarts next week! See ya all then! =D