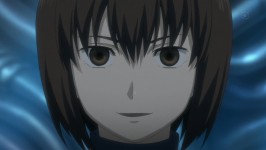 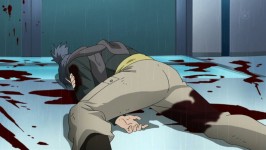 These last two episodes of No.6 have been absolutely amazing. How many of you are with me? Animation sequence has been espectacular! The ending is near and I’m already dealing with an emotional breakdown thanks to this series. Oh No. 6, why couldn’t you have been 24 episodes instead?!

Episode 9 Summary: Nezumi, Sion, Rikiga and Inukashi formulate a plan in which they are able to torture information out of a No.6 official. This is all thanks to using Inukashi as a prostitute decoy. However, when nobody jumps out to help Inukashi as she is getting molested, she explodes. Nezumi then comes out to capture the guy. Inukashi walks out of the room angrily and Sion follows her to say he’s sorry. After they manage to wriggle out information about the correctional facility, they set to work on creating a plan in order to infiltrate. They come to the conclusion that the correctional facility is too difficult to infiltrate and heavily secured. However, Nezumi plans to take advantage of the Massacre that is about to take place in the West Block in order to infiltrate the facility. We get a short scene with Sion and Nezumi. Sion is talking about plans that he has once sumer comes around. He states that he’d love to live with Nezumi, Karan and Sion under one roof. Nezumi calls him stupid but Sion says he trusts him. The next day, Nezumi and Sion are out walking when Nezumi’s manager comes up to him, asking why he hasn’t shown his face at work. Nezumi is spared from having to answer when huge machines make their entrance and start blowing up the West Block. Nezumi and Sion immedietly take cover. Sion begins to lose himself in the chaos that is surrounding him, experiencing massacre for the first time. However, he is brought back to reality when he hears a baby crying. Against Nezumi’s protests, Sion saves the baby and sents him to Inukashi via one of Inukashi’s dogs. However, Sion gets spotted by a tank and is about to be killed. Nezumi steps in however and the two are captured. As they are then carried off into a huge truck, everyone is crying and in hysterics. Nezumi begins to sing and everyone calms down. Nezumi tells Sion that there are many things which he is about to see, but that he doesn’t want Sion to change. That he wants him to remain the same as always. He then covers Sion with his superfiber cloth. The truck then dumps everyone into a black hole and they fall into darkness. 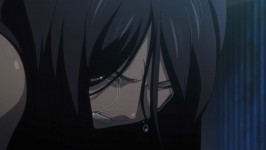 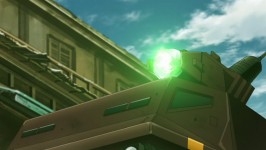 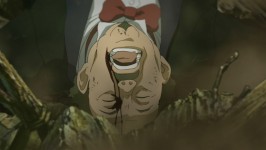 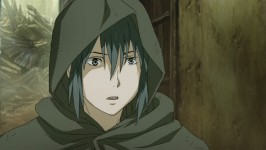 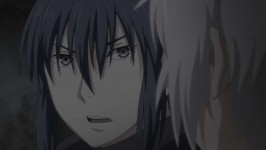 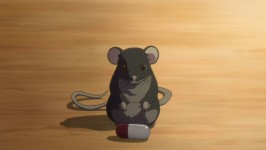 Episode 10 Summary:  Nezumi and Sion fall into the darkness but soon roll unto a pile of dead bodies, where everyone was dumped. Sion calls it hell and Nezumi only says its reality. Sion then throws up, completely overwhelmed by everything he is seeing. Nezumi begins to climb up on all of the bodies, using them as a mountain to hike in order to get out of the hole. Sion follows him and they are soon able to get out. They go about going from place to place, careful to not catch the attention of guards. Back at Inukashi’s house, Inukashi is mad that she now has to take care of a baby. Rikiga and Inukashi then leave in order to execute the rest of the plan. They assault one of the men with which Inukashi constantly meets up to get information. They manage to infiltriate the correctional facility, to help Nezumi and Sion. Back with Nezumi and Sion, Sion can now hear Safu calling for him, guiding them to her. Nezumi is at first sceptical and doesn’t say anything about it. As they continue to infiltrate, Nezumi starts to notice Sion’s attitude changing, coming to take charge. After the two get caught by some security guards, Nezumi shoots them. Nezumi tells Sion that there was no other way, expecting Sion to be worried about shooting the guards. Sion however, doesn’t seem to care, saying that it was necessary. Nezumi can be seen quite disturbed by Sion’s attitude. Just as they are about to reach the final floor, they get intercepted by more guards. Nezumi begins to shoot them but one of them manages to attack him. However, Nezumi uses his knife to escape. Then the captain of security comes. Nezumi uses one of the guards as protection. However, the captain still shoots him in the arm and leg. Nezumi falls down screaming in pain. He is about to be shot when Sion shoots the captain instead. Sion has completely lost himself. He angrily looks down on the guard, “How do you dare to do that to Nezumi?” Nezumi shouts at Sion to stop, to not kill the guard. Sion however does not listen to him and kills the captain. Nezumi then loses himself and begins to cry because Sion has now tainted his hands. Sion recovers and sees Nezumi crying. He is reminded of the 12 year old Nezumi whom he had met on that fateful night 4 years ago, so fragile and defenseless. Sion then comforts Nezumi and treats his wounds. The two get up and enter an elevator that opened up for them. This is where Nezumi finally believes about Safu guiding them. The two then arrive at the top floor, where Safu is seen waiting for them, “I’ve been waiting for you, Sion.”. 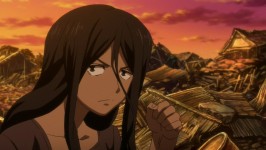 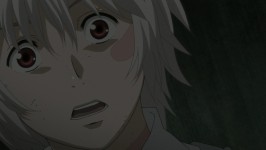 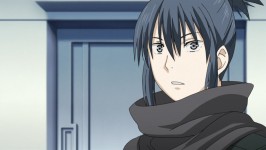 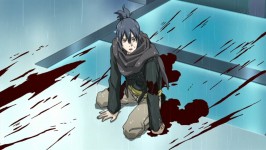 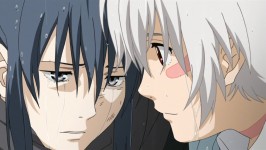 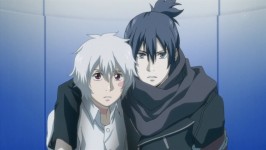 Impressions: I. AM. IN. A. GLASS. CASE. OF. EMOTIONS! I can’t deal with this! ;A; I don’t want No. 6 to end!!! /flails around. No. 6 is such a good story, mainly impulsed by the beautiful and selfless realionship between Nezumi and Sion. ;A; I will be sad to see this anime end.

Anyway the animation these last two episodes has been top-notch. Specially the actions scenes, since that’s what BONES is best at. I’d have to say episode 10 has been the best episode thus far. Everything just felt so right and the fighting scenes were amazing. A job well done BONES. Safu at the end of episode 10 gave me some freaky vibes. She looks all devoid of emotions and evil. D: Anyway, with only one episode left, I don’t know what I’ll do with my life. ;A; I don’t want Nezumi and Sion to leave me! ;A; I already know how the novels end so I’m bracing myself for the incoming flood of tears and agony that I will suffer next thursday.