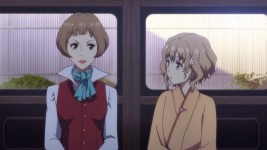 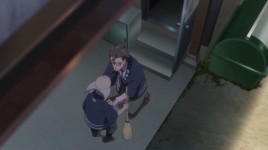 With the series wrapping up over the next two episodes, I’m glad to see the animation team decided to wrap up a few lingering things.  Like Ohana and Ko’s relationship and the whole bombshell of Ohana’s grandmother closing down the Kissuiso thing, for example.  As expected, the episode starts off with everyone going about their daily tasks but constantly fretting about what’s going to happen after the festival.  Tohru asks Ren if there’s any way he can possibly convince Ohana’s grandmother to keep the inn open, but Ren is too busy reminiscing about how he was Tohru’s age when he first started working at the Kissuiso and that Ohana’s grandmother has become a close friend.  Meanwhile, Nako arrives at work and is obviously depressed over the big news and almost forgets to greet Tomoe.  Tomoe scolds her, saying that a greeting is one of the basic things about being a waitress and Nako apologizes before hurrying away to start her daily tasks.  Ohana, who woke up to find Minko already up for the morning, finds Minko outside peeling white radishes.  She mentions that they really don’t need her to peel so many since there’s only one guest in the entire inn, but Minko ignores her and continues peeling the radishes.  While everyone is busy performing their daily duties, we see Enishi and Takako enjoying some coffee when Enishi starts to worry about the inn.  He wonders if it’s the financial state of the inn when Takako asks him what she always said when they were in college.  Enishi spouts off a ton of random english phrases until Takako interrupts him and says she always said “Never give up”.  She then informs him that she’s headed to Tokyo to find the producer who swindled Enishi out of all of that money.

When Takako arrives at Ohana’s grandmother’s office, she finds that Ohana is already there, inquiring about the state of the inn.  When Takako informs her that she’s ready to head to Tokyo, Ohana’s grandmother tells her to take Ohana with her since she’ll need to discuss her plans for the future with her mother.  Ohana is surprised by this, but agrees when Takako says that she’ll be leaving in an hour.  Not long after, Ohana is busy packing when Jiro visits her and commends her for staying so level-headed through the whole thing.  He reveals that Ohana’s grandmother says that upon closing the inn, she’ll remove the rest of his debt so he’s really the only one who’s happy about the inn closing.  But when Ohana asks him where he’ll live after the inn closes, he’s at a loss of what to do and starts to panic.  A little while later, Ohana and Takako are packing the car and getting ready to leave when Nako wishes her luck with Ko (which embarrasses Ohana) and then hands her something Minko made them.  When Takako tells her to hurry, she hastily says goodbye and runs to catch up with Takako.  After the two leave, Nako asks where Enishi is and Tomoe says he’s probably off crying somewhere because he’s just married and his wife has already left him for business.  Of course, Tomoe is right and Enishi is sitting in a corner sulking when Denroku passes by and asks for permission to speak freely.  Once given permission, Denroku tells Enishi that he thinks Takako is taking this big issue upon herself since she sees it as the first task for her to become the new Madam Manager of the inn.  This surprises Enishi, but he also seems a little bit happy that Takako is willing to go so far to save the inn. 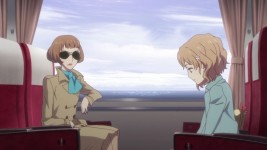 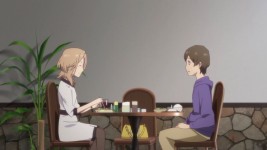 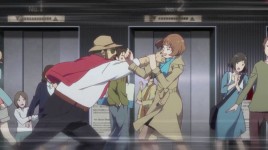 Once on the train, Ohana and Takako have a tense conversation including what’s going to happen in Tokyo and what Ohana should call Takako.  At first, Ohana calls her “aunt” which irritates Takako until Ohana explains that since she married her mother’s brother, she’s technically her aunt now.  Takako relents, but asks Ohana to call her “Nee-san” instead, since calling her “aunt” makes her feel old.  Their conversation continues with Takako telling Ohana how lucky she is to be young and have everything ahead of her and even having a boyfriend in Tokyo.  This causes Ohana to tear up and Takako asks if she said something wrong before becoming flustered and saying that Ohana doesn’t have a boyfriend.  She then complains that the meal cart is taking forever and Ohana says that Minko packed both of them a bento, which Takako scolds her for not mentioning sooner.  Both of them are amazed at how good the bentos are and Ohana seems pleased that Minko really put some effort into their lunches.  Afterwards, a drink cart rolls past and Takako orders a beer before asking Ohana if she wants anything; Ohana orders a cola and black tea and proceeds to combine the two.  The two remain silent for a moment before Ohana says that she needs to find time to talk to Ko.  Takako is surprised by Ohana’s boldness, but agrees none-the-less.  Meanwhile, Ko is busy working at the bookstore when he runs into Ohana’s mom.  She invites him to have lunch with her (thankfully he was able to get someone to cover him) and while he’s a bit embarrassed about it, he asks Ohana’s mom to tell him more about Ohana.  He also mentions how he never got to see her work at the inn and he’s a little jealous of her for being able to visit Ohana.  Ohana’s mom smiles and then asks if he has time to accompany her somewhere else; Ko accepts.

While Ohana’s mom is leading Ko back to her office, we see Ohana and Takako heading up to Tokyo tower.  It turns out, Ohana’s mom found out where the producer was and gave Takako some inside scoops on him.  They end up finding him, though Ohana stays put to watch the elevator while Takako chases her.  When they lose him, Takako merely calls his cell phone and follows his obnoxious ringtone.  When he tries to get away again, Takako shouts “killer”, which stuns everyone else in the tower.  The man is furious and goes to attack Ohana, but Takako pushes her aside and body slams the guy, allowing them to catch him.  With the man in custody, Ohana is kind of amazed at how strong and stubborn Takako is.  While Takako is surely busy demanding that the man pay them back every penny that he took from them, we see Ko and Ohana’s mom at her office.  She tells him to relax since it’s not like he’s asking him to watch porn with her (Ko says he’s relieved, which makes me wonder how pure he really is) and she tells him that she got a video from a producer who wanted to film a movie at the Kissuiso, but decided not to at the last second.  Ko is amazed at the size of the inn, but I think he’s really more amazed to see Ohana working.  Despite saying that he can’t drink coffee, he asks for a cup of coffee.  When Ohana’s mom comments on what he said earlier, he says that it’s because the last time he saw Ohana he had some really bitter coffee and wanted to remember the taste of it.  She seems to understand what he means and only nods when Ko excuses himself.  As Ko is heading up to the bridge, he’s thinking about how he was stupid for trying to get over Ohana and that she’s not bitter or bland coffee.  As luck would have it, once he gets to the top, he sees Ohana arriving at the top of the bridge as well! 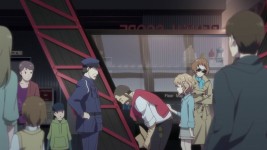 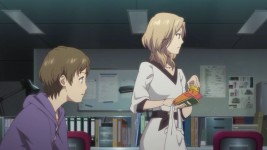 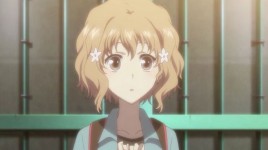 Opinions:  This was a really, really good episode!  Not only did we see Takako be a complete badass in taking down that producer, but we also get to see her become determined to prove that she’s worthy of running the inn.  I think that determination is a really good trait and hopefully it can sway Ohana’s grandmother into allowing Takako and Enishi to succeed the inn.  Despite the train ride seeming to be really tense and awkward between Ohana and Takako, I think that seeing Takako really nail that producer allowed Ohana to see her in a new light other than just seeing her as the annoying business woman who comes up with crazy ideas to get business at the inn.  The whole thing with Ko and Ohana’s mom was cute and I’m glad to see that Ko is still hopelessly in love with Ohana.  I’m really excited to see what happens between them in the finale and I really hope that Ohana is able to confess her feelings to him and that they’ll live happily ever after.  But at the same time, I don’t want the inn to close and wonder if anything will be able to persuade Ohana’s grandma into keeping it open after the festival.  Next week can’t come soon enough!