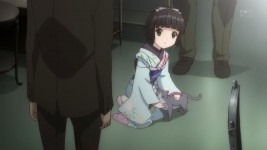 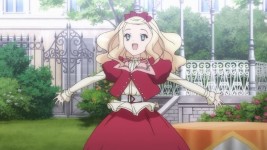 This week, it seems as though my suspicions were correct, though not entirely.  While I was right about there being something between Camille and Claude when they were children, we don’t learn much about it except for a few details strewn about here and there during the episode.  However, we do learn a lot about Camille’s character and why she always seems to be a bit withdrawn from others, especially around Yune.  The episode starts off with both Yune and Claude putting their best clothes on – in Yune’s case it’s a stylish kimono that looks absolutely fabulous on her, and Claude wore a nicer suit and paperboy hat, which suits him very well – because Yune was invited to tea at Alice’s home.  As they’re getting ready, Claude starts thinking about when he was a child and we get a minor flashback.  It seems as though he used to be close friends with Camille and would come visit her, usually bringing a stray cat with him.  In the flashback, Camille tells Claude that she loves it when he visits her because not only is he her friend, but he always brings a cat with.  She then looks up at a large window overlooking the garden and sees a white cat (the same one she’s been seen carrying around as an adult) and says that she feels bad for the cat they own since it’s not allowed to leave her mother’s side.  Shaking his head, Claude tries to forget about the memory and heads downstairs.  Meanwhile, Yune is already waiting for him downstairs and is chatting with Oscar.  She feels bad for leaving him to watch the shop all day, but he tells her that it’s really not a problem.  Yune seems to forget all about their conversation when she sees a kitten wandering around outside and she dashes to the door in the hopes of being able to pet it.  As she opens the door, the cat rushes inside and Yune goes to grab it just as Claude comes downstairs.

Yune apologizes for letting the cat inside and Oscar chuckles, saying that Claude doesn’t like cats, which just makes Yune apologize even more.  Claude says that he doesn’t hate cats and Oscar chimes in saying that he only hates a certain person who owns a cat.  Of course, all of this is flying right over Yune’s head but Oscar’s comment riles up Claude and he tells his grandfather to shut his mouth before grabbing Yune and stomping out of the store.  Meanwhile, Camille and Alice are gushing over a new hat that Camille got (or rather, Alice is gushing and Camille is the same as always) when Alice mentions something about high society and how perfect Camille is for it.  This seems to harden Camille’s expression, though it’s always hard to tell because of that blasted fan of hers, and she tells Alice that she doesn’t really want to be in high society.  Before their conversation can become heated (and let’s face it, when Alice is involved, things always become heated for one reason or another), their butler arrives and informs Alice that Yune is waiting for her in the entryway.  Alice speeds off to greet her friend, leaving Camille in her wake and launches into hugging Yune.  While Yune is still trying to recover from this newest onslaught of affection from Alice, Alice is busy telling Claude that he didn’t have to escort her, which irritates Claude.  Sensing that there could be an argument, Yune diverts Alice’s attention back to her and Alice drags her off to their tea party while Claude calls out to her and says that he’ll be waiting for her.  Alice drags Yune out to the garden and twirls around, asking Yune how much she loves it (of course, being polite as ever, Yune says that it’s beautiful – which it is).  Alice seems enamored with the fact that by going out into the garden, she can feel as if she’s free in the real world even while being stuck inside of a mansion all day.  Yune doesn’t seem to understand what Alice means, or at the very least chose to ignore it, and the two girls settle down to have some tea and snacks. 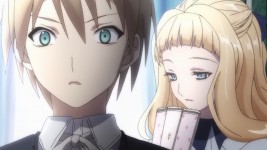 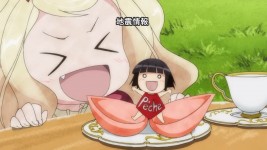 Meanwhile, Claude is merely wandering around the foyer when a maid approaches him and beckons him to follow her.  It appears that Camille has requested him and while Claude isn’t happy about it, he obeys the maid’s wishes and follows her.  He soon joins Camille in a room that overlooks the garden (perhaps the one that Camille looked up at when they were children?) and welcomes Claude.  Claude is still wary of her, but he joins her at the window overlooking the girls chatting happily over tea.  Camille says that she’s surprised Claude bothered to show up and then reminds him of all the times they spent playing in that very garden.  Claude turns away, obviously troubled by the turn of their conversation, and says that he’s only there to keep an eye on Yune, which seems to upset or possibly anger Camille.  Once their conversation is over (honestly, it’s more of Camille guilt-tripping Claude for not showing up for all those years) Claude plops down in his seat as Camille leaves the room.  While all of that was going on, Yune was busy telling Alice fairy tales from Japan, particularly one about a man who was born from a peach and fought demons and such to save the world with the help of his bird and dog.  Of course, Alice thinks that the man is actually a peach so Yune has to explain that he was a normal person, just born from a peach.  Alice assumes that this means he’s tiny (like Thumbelina I suppose), which gives us a cute mental image of Yune being teeny tiny and popping out of a peach, but Yune tries to explain that it was a giant peach, so he’s a normal sized human.  Finally understanding, Alice is jealous that Japan has such awesome stories and explains that in France, they just have stories about princesses needing their one true love’s kiss to awaken from a deep slumber.  Getting an idea, Alice hops to her feet and beckons Yune to follow her.

Yune agrees and Alice quickly brings them to her old nursery/playroom from when she was a child.  Yune is in awe of the room and all of the toys scattered about and Alice tells her that it hasn’t changed a bit since she became too old to play there.  Pointing at the ceiling, Alice shows Yune a dragon that she painted on the ceiling when she was a little girl.  We then get a flashback to when Alice and Camille were both little (Camille was probably in her early teens at the time) and Alice is telling Camille and her maid a story she made up about a girl from a far Eastern land coming to visit and the two of them flying away on a dragon to explore the world.  Camille seemed really enthralled with the story as well.  Once done telling Yune about her story, Alice remembers something and asks Yune to stay there while she goes to get something before rushing out the door.  Camille arrives a moment later and makes the comment that Alice is a bad host for leaving Yune all alone, which causes Yune to apologize.  Camille frowns (or I think she does. I can’t tell because of that stupid fan she’s always carrying!) and tells Yune to stop apologizing for everything because it only makes her seem stupid.  Yune starts to apologize again, but stops herself and seems unsure of what to do.  Camille then whisks into the room and notices that the dragon is still there and says that she doesn’t think the high society world will be big enough to contain Alice, which confuses Yune, before heading to the dresser and telling Yune to pick out a dress to wear.  Yune sorts through them and picks out one that is the least frilly, stating that Claude told her frills just get in the way, and Camille seems a bit jealous as she tells Yune that she shouldn’t always decide on things based on what others have told her.  However, she helps Yune put on the dress and reveals that it was the very dress that Alice wore when she told her the story of the girl from the far away Eastern lands.  Once finished helping Yune, Camille asks Yune to continue teaching Alice about her culture and telling her stories.  Yune agrees and the two of them gaze out the window and Camille seems happy for the first time since the series started. 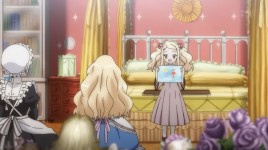 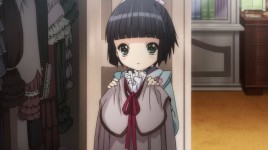 Opinions:  This was definitely an intriguing episode.  Not only did we learn a whole hell of a lot about Camille’s character, but it seems like she’s almost jealous of how close Yune and Claude have become.  Not to mention she seems jealous of Alice’s out-going nature and the fact that she’s set her eyes on something other than just a nice marriage.  The fact that Alice has always seemed to be interested in Asian cultures was interesting to learn, but not as interesting as the fact that Claude and Camille used to be so close.  I’m definitely curious to see what caused them to stop being friends, especially since Claude seems to have epic amounts of butt-hurt when he’s around Camille.  It looks like we’ll get to see what happened between them in the next episode and I’m super excited to see what it was.

Important note:  Unfortunately, due to personal reasons, I’m dropping Ikoku Meiro no Croisee and will no longer be reviewing the series.  It has nothing to do with the show itself, since I do love it very much, but because of work and time constraints, I have no choice but to drop the show in terms of reviews.  I hope you don’t mind and I’m terribly sorry for any inconvenience I may have caused.