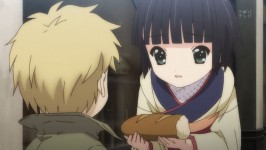 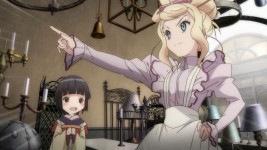 I’ll be the first to admit that this episode almost made me cry both because of what happened and how Claude treated Yune.  It was all very sweet but emotional at the same time.  The episode starts off like many of the other episodes; Yune is gathering things for breakfast and spots the pot of umeboshi that she and Oscar brought with on their trip from Japan.  She remembers that Claude said that he wanted to get used to Japanese food so that he could learn more about her culture and she decides to bring out the umeboshi to eat with breakfast.  As she turns around to place the jar on the table, she suddenly collapses, but manages not to drop the jar.  Claude enters the room right around then and asks her what she’s doing; Yune greets him and informs him that she thought he might like to try umeboshi with their breakfast.  Having already tried it, Claude instantly recognizes the jar and blanches before telling Yune that he’s not interested in trying something new so early in the morning.  This disappoints Yune a bit, but she puts the jar back without any protest.  Once everyone is roused from their sleep and gathered for breakfast, things seem to be going along normally until Yune pauses and decides that she’s really not all that hungry.  Claude notices this and tells her to eat up, but Yune slips the piece of bread into the sleeve of her kimono and tells him that she’ll eat it later.  Claude scolds her, telling her to make sure she eats it soon because otherwise the bread will become hard.

After breakfast is over and the dishes are cleared, everyone sets to work which involves Claude going to his workshop, Yune keeping watch over the store and Oscar going off and doing whatever it is he does on a daily basis.  As she keeps watch over the store, you can tell that there’s obviously something wrong with her; she just doesn’t seem her normal cheerful self.  Although no customers come into the store, Yune does spot the little boy who stole from them before looking in the window again.  She hurries to the entrance and calls out to him as he turns to run away and manages to get him to stop for a moment.  She scolds him rather gently for stealing and asks for the candle stick he stole back, but the boy reluctantly tells her that he sold it for bread.  This disappoints Yune, but she gets an idea and pulls out the bread she stored in her kimono at breakfast.  Handing it to the boy, she asks him to promise her that he’ll stop stealing from people to get food and the boy seems to agree.  Of course, Claude shows up and shouts at both Yune and the boy, scaring the poor kid off and startling Yune.  Yune tries to explain what happened, but Claude ignores her and yells at her, telling her that she can’t be nice to him because then he’ll just become a beggar and there’s nothing they can do to help him.  Like before, he tells her to just watch over the shop and stay quiet unless someone actually enters the shop.  Discouraged, Yune heads back into the shop and does as she’s told. 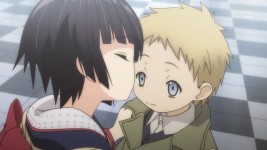 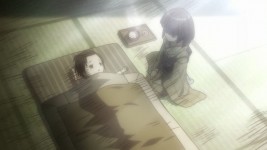 As luck would have it, Alice waltzes into the store not much later, eager to show Yune the new things she’s brought from Japan.  Of course, she has no idea what any of the items are for and Yune has to explain that what she thinks is a hair pin is actually used to make tea and the makeup brush is actually a calligraphy brush.  Alice gushes about Yune’s knowledge (though I really think it wouldn’t hurt Alice to pick up a book and actually learn about their culture) and asks Yune to come to her house, but Oscar butts in and says that Yune hasn’t been feeling well lately and can visit another time.  This seems to be a surprise to both Alice and Claude, but Alice agrees to head home at Oscar’s plea and kisses Yune on the cheek to say goodbye.  Not used to that, Yune becomes flustered and Oscar explains that in Japan it’s uncommon for people to kiss one another.  Alice explains to Yune that kissing someone on the cheek is a way of saying hello or goodbye to the people close to you, but then taunts Claude for not having done the same to Yune.  Annoyed, Claude shoves the girl and her servants out of the store and slams the door shut.  Later that day, Yune is resting her head on the counter while coughing a bit when she notices the same little boy at their window again.  She goes to talk to him, informing him that she doesn’t have anything to give him in terms of food.  She then tells him that they can’t meet again and kisses him goodbye on the cheek before telling him to be a good boy.  Claude sees the whole thing and scares the boy off before pulling Yune inside to scold her again.  Yune seems more upset about the subject than before and asks if it’s really such a bad thing for her to sympathize with the boy since he’s working hard to find a place that he belongs, just like she is.  After she apologizes for her outburst, she leaves the room, but collapses on the stairs where Oscar finds her.

Oscar and Claude drop everything they’re doing to tuck Yune into bed, though they’re worried since she has a fever.  Claude asks if they should get a doctor but Oscar tells him that she should be fine since it looks like she just has a cold and that she just needs her rest.  The two of them leave her alone and Claude asks Oscar if Yune should go back to Japan.  He’s obviously worried about her and how she said that she’s still trying to find a place that she belongs and thinks that she doesn’t feel comfortable staying with them.  Oscar tells him that he’s worried for nothing and that Yune definitely feels at home with them.  Meanwhile, we get a small dream/flashback sequence of when Yune was younger and was sick.  Her older sister is tending to her and comforting her before giving Yune a ginger liquid (maybe tea?) to drink so that she’ll feel better.  When Yune wakes up, she realizes that she’s still in France and reaches for the alphabet book that Claude bought her when she first arrived, but ends up collapsing and falling out of her bed.  Downstairs, Claude is still thinking about what Yune said earlier and heads upstairs to ask her if she wants to go back to Japan, but is horrified to find her collapsed on the floor.  He calls Oscar and puts her back in bed and the two go to look for a doctor, but the hospital is full of people and there’s no way they can get a doctor to see her.  Claude gets an idea and though he doesn’t like it, he goes to call upon Alice and asks her help in getting Yune a doctor.  Of course Alice sends for a doctor right away, much to Claude’s relief and he heads back home after asking Alice for one more thing.  Once home, we find that he asked her for a recipe for rice porridge and goes about making the porridge for Yune.  He eventually brings it to her and Yune is pleased to see that not only did he make her breakfast, but the little boy found out that she was sick (from Claude shouting at him when he saw him standing outside the store again) and brought her flowers.  Claude is happy that she’s touched by the boy’s gestures, but mocks being offended, which causes Yune to flail.  Happy that she’s feeling better, Claude feeds her the food (literally) and after her meal, he tucks her in and kisses her cheek.  Yune is simply happy for all of the love she’s received from Claude and Oscar, but I think having Claude kiss her on the cheek made her even happier.

After the ending credits, Alice arrives with bottles full of ice and shoves the bottle of ice onto Yune, which startles the poor girl.  Yune tells Alice that in Japan they sweat out a cold instead of making themselves cold.  Alice is confused and asks if she wants the ice bath she brought and Claude shouts at her, saying no.  We then see Alice’s butler and maids trying to haul a massive bathtub full of water and ice up the stairs but to no avail. 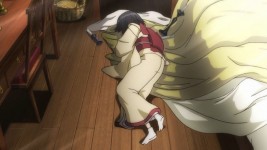 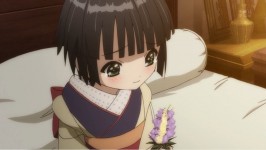 Opinions:  Like I said in the beginning, this episode nearly made my cry.  Seeing Yune so sick had me worried but then seeing how much that little boy and Claude cared about Yune was so sweet and touching that it made me a little bit choked up.  The whole thing with Alice kissing Yune was as unexpected for me as it was for Yune, but then again, I should have seen it coming since this IS Paris we’re talking about.  Seeing Yune so torn up about Claude and Oscar not kissing her was once again, tear inducing, but the fact that Claude went the extra mile to make her something from home when she was sick more than made up for it.  I’m definitely looking forward to next week since it looks like we may get to see whether my suspicions about Claude and Camille are right or not.  I hope I am!