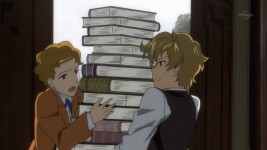 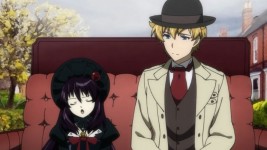 Much like with the last few episodes, we don’t get to see a young Huey in the Bibliotheca but we get an intriguing scene that gives us a bit of a clue as to what is going to happen throughout this week’s episode.  At first, all we see is a blue glowing room with some sort of capsule from which steam flows out of.  We then seen a young woman – naked, of course – sleeping in the capsule, but she awakens and we seem a cloaked figure informing her that she will be carrying out his experiment on humankind.  After the opening credits, we then see Dalian and Huey arguing about whether Huey should be moving the books Dalian has strewn across the floor when someone knocks on the door.  With a stack of books in his arms, Huey manages to answer the door only to be accosted by a former comrade from his military days.  The man begs Huey for his help in searching out a Phantom Book, which piques Dalian and Huey’s interest.  Soon, the three of them are headed towards a high-society brothel a few towns over by carriage and the man – who Huey introduces to Dalian as Armand – informs them that he has courted a woman named Viola, but before she can accept his proposal, she requires that he find the Salamander’s Tablet and bring it to her.  Dalian inquires about the woman and Armand tells her all of her nicknames, such as “Quicksilver Idol” and “Moonlight Queen”, but it still doesn’t seem to make Dalian any less disapproving.  She then scolds Huey for being interested in women like this Viola girl, but Huey tells her that she’s actually the one interested in her.  Dalian huffs and says that all men are the same.

Once at the brothel, the trio finds that Viola has been moved to another building, some distance away and after much begging and majestic arm gestures on Armand’s behalf, the brothel owner hands over the address for where Viola can be found.  Some time later, after night has already fallen, the trio arrives at what appears to be an abandoned mansion.  A lone maid answers the door and directs the group upstairs and to one of the balconies where Viola is waiting.  Armand greets Viola with the same majestic arm gestures that he used on the brothel’s owner and croons at the girl.  Viola notices Huey and Dalian and asks Armand if they’re friends of his.  Armand says they are and introduces them to Viola, who welcomes them.  Despite Huey’s polite greeting, Dalian gets straight to the point and asks Viola what it is she needs the Phantom Books for.  She then rattles off several other suitors that have courted Viola and the Phantom Books she’s asked them to gather, but when asked why she needs or wants them, Viola admits that she’s not entirely sure, but part of her knows that she needs the books.  Armand becomes emotional when Viola then tells them that she doesn’t remember much of her past or how she came to live in the city, but that she knows she needs to stay there.  However, as Armand croons at Viola again, Dalian becomes so annoyed at his actions that she’s ready to kick him, but Huey kicks him first, throwing him across the balcony.  Unfortunately, it wasn’t just to shut him up; it was because something rocketed into the balcony and would have killed Armand.  Huey fires some shots at it (while looking incredibly badass in the process) and the group finds that Viola’s master will be fetching her on the next full moon unless she is able to gather the Phantom Books by then.  After the thing leaves (which looks like a silver faerie), Dalian informs Viola that they will be there again on the full moon and then the group takes their leave. 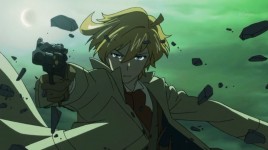 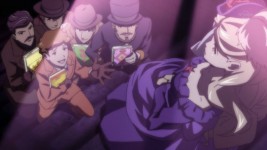 As promised, Huey and Dalian return to the mansion on the next full moon, though Dalian is less than amused to see all of the men with rifles and other weapons guarding the place.  Armand appears and shows Huey that he was able to find the Salamander’s Tablet in time and that he plans to ask Viola for her hand in marriage.  However, the other four men that have courted Viola have also found the books she requested and plan to ask Viola to make her choice.  She asks Huey if he’s ever heard the story of Tale of the Bamboo Cutter and he says yes.  She goes on to say that the princess asked the five men to bring her several items before she could decide on whom she would marry and scoffs at how men are still stupid enough to fall for a trick like that.  Huey ignores her as the men begin cheering; Viola is heading down the staircase in a rather elegant dress and hat and thanks them all for showing up to protect her.  As soon as she finished talking, Armand and the other four men rush up to her and present their books before demanding that she pick who she wants to marry.  Thankfully, before Viola can say anything (considering she looked incredibly frightened, I’d say it’s a good thing they were interrupted) a cloaked figure – likely the same one we saw earlier in the episode – appears and tells Viola that it’s time to come home.  When Viola doesn’t say anything and the men protecting her open fire, the man laughs as he takes all of the bullets shot at him and summons several of those silver faerie things that warned Viola of the full moon and attacks the men.  Huey watches as all of the men around him suddenly fall to the ground and die and he’s mortified to find that he turned their blood into boiling mercury.

Armand and the other four men are unscathed as well and attempt to attack the cloaked figure with their books, but he laughs and destroys the books as easily as if they were a child’s toy.  Turns out, they were fakes and all of the men shelled out a ton of money to buy them.  Huey asks Dalian if she’s sure the man isn’t using a Phantom Book and she says that he’s someone with untold wisdom and is a true magician.  The man, who introduces himself as Melgar, tells Dalian that she is indeed right and that she should watch as he retrieves his daughter.  Viola seems shocked that he’s his father, but it also appears that she’s lost most of her memory.  When Armand and the other men still try to protect Viola, Melgar sends another of his “daughters” towards them, but Viola is somehow able to pull it out of the sky and smash it into the ground.  Melgar laughs and then tells them that she isn’t a real human, but is actually a homunculus made through alchemy.  He then goes on to tell them that Viola’s true purpose was to play human men for fools and see how human she could truly become.  Unfortunately for him, she became too human and developed a consciousness and ego, which he hadn’t anticipated, so now he wants to take her home and dissect her to find out exactly when and how that happened.  At this point, Dalian has heard enough and opens the Bibliotheca for Huey and we see a bit of young Huey and the girl in white.  Huey asks her if she’s ever lonely and she says no, because she’s forgotten how to feel lonely, but she doesn’t tell him that now that she’s met him, she feels lonely when he’s not there.  Huey pulls out the same five books Viola requested and the books choose the respective man and they are able to wield them in order to fend off Melgar.  Melgar admits defeat, but warns Viola about staying with humans when her body doesn’t age.  Viola informs him that she plans to live her life how she sees fit.  After Melgar leaves, Armand and the other men return the books to Huey, saying that they don’t need them anymore and then turn their attention to Viola and ask her to choose.  Suddenly, another man appears and Viola calls out to her “darling” and runs to him before informing the other men that she’s already accepted his proposal.  The men are, of course, devastated, but Viola doesn’t notice and runs off with the man, leaving a very confused Huey and Dalian in her wake. 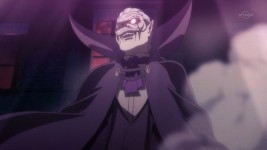 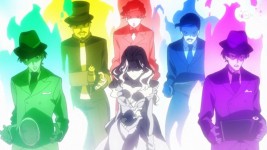 Opinions:  Another awesome episode!  It was a nice change to see Huey being a badass again (seriously, I find him incredibly sexy when he’s defending Dalian like that) and even to see young Huey in the Bibliotheca.  Though we still don’t have any new information on who the girl in white is, it was touching and incredibly bittersweet to find that meeting Huey caused her to learn how to feel lonely again.  I’m kind of upset that Huey didn’t get to read the Phantom Books, but it did seem fitting that Armand and the other men would read whatever book Viola asked them to find.  Did anyone else want to kick Armand and tell him to shut the hell up?  I found him incredibly annoying, though that was mirrored by Dalian’s interactions with him and even how Huey repeatedly told him to stop calling him Lieutenant.  Overall, it was a well put together episode with lots of action.  Seeing Huey as a badass entirely made this episode for me, lol.