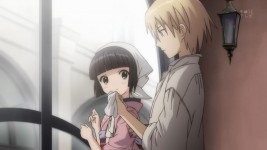 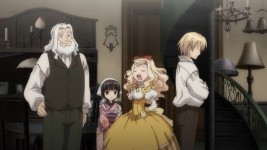 Once again, this was an incredibly adorable episode where Yune learns some of the differences between Japanese and French cultures.  But it also seems that there may be more between Claude and the noble family than meets the eye.  The episode starts off with us seeing Yune go about her daily cleaning routines, though she seems to be having trouble cleaning the large arched window in the attic.  While she goes to get a chair to stand on, we see shoppers on the streets stopping whatever it is they’re doing to watch in awe as a carriage is pulled down the street.  Turns out, Alice is going to call upon Yune again and as she travels, she rambles about trying to get Yune to stay with her and perhaps even having Yune owe her a favor.  Throughout her rambling, her butler simply says “Yes, milady” which makes me think that he just tunes her out most of the time.  As Alice arrives at Claude’s shop, we leaver her to see Yune standing on a chair, trying to reach the top of the window.  As she starts to lose her balance, Claude suddenly appears and tells her that if she needs help, she should just ask him.  Yune is flustered by his offer to help her, but quietly declines it since it’s her job to do the housework.  Before Claude can protest her decision, they hear the door open and the two of them go downstairs to investigate the shouting they’re hearing.  Turns out, Alice’s crinoline has gotten stuck in the doorway and she’s shouting about the small entranceway.  Claude deadpans and tells her that if she can’t even get through the doorway, then she shouldn’t bother coming over.

Of course, this riles up Alice, but as soon as she sees Yune she turns into the fangirl we all know and rushes over to Yune, declaring how cute she is.  She then invites Yune over to her house to have their photograph taken, to which Claude scoffs and says is a waste of time, but Yune seems happy about it.  Yune admits that she and her elder sister used to get their photographs taken, to which Alice jumps on and says that they could send her sister a photograph of the two of them as a memento.  Claude still doesn’t seem happy about it and begins arguing with Alice about whether or not Yune should go when Oscar walks in and laughs.  He says that it seems like Claude and Alice are fighting over a lover, which confuses Yune but causes the other two to become flustered.  Before another argument can start, Yune tells Alie that she would be happy to come over to her house, but first she has to finish her chores.  Alice is thrilled and tells Yune that her maids can stay behind and finish her chores for her, but Yune declines, saying that she’d rather do it herself since it’s the only thing she can do to make herself useful.  Oscar chuckles and says that once Yune becomes set on something, it’s difficult to change her mind.  Alice smiles wryly and agrees, saying that she’s seen that side of her before and agrees to wait for Yune to finish.  As Yune continues cleaning, Alice asks if she would like help since it would finish her chores faster, but Yune again declines.  Alice is confused as to why Yune looks so happy while doing such hard work. 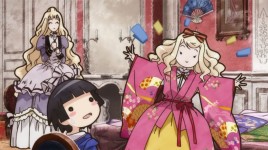 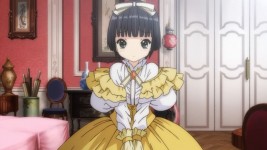 Once Yune is finished with her chores, she and Alice travel back to Alice’s house.  Alice takes it upon herself to show Yune her photographs – which are used as calling cards in France – and Yune is amused by some of the photos that show Alice not being able to sit still.  Alice admits that it’s hard for her to sit still during a photograph, but gushes over the fact that her sister Camille can sit still like a proper lady.  She then points out some photos of her sister wearing a crinoline and Yune asks what a crinoline is.  Alice picks up her skirt to show her and Yune comments on how it looks a bit like a bird cage.  Camille enters the room at that point and agrees with Yune on the fact that it looks a bit like a bird cage.  Alice then decides to play dress up with Yune and shows her all of her kimono and tells her to pick whichever one she wants to try on.  Of course, she has her maids try and dress Yune, but Yune becomes flustered and Camille tells the maids to back off and let Yune do it herself.  She then tells Alice to pay attention because she might learn something.  Of course, Alice is awed by the fact that Yune can put on a kimono so easily, especially since it’s all with cloth and knots.  Alice then declares that she wants to wear a kimono as well and shows Yune how she normally wears it, which is over her current dress.  Yune convinces her to let her show her the proper way to wear a kimono and Alice then starts to take off her clothing, starting with the crinoline.  Yune notices Alice’s corset and murmurs something about having to use extra cloth because your abdomen needs to be flat in order to properly tie an obi.  After a bit, Yune successfully gets Alice into a kimono which delights Alice for a bit before she turns her attention to Yune.

After what I’m sure was a struggle, Yune is now clad in Alice’s dress, crinoline and shoes.  While she looks absolutely adorable, she admits that her legs feel cold and her toes feel a bit pinched.  Camille smiles and says that her legs probably feel cold because of the wind blowing up the bottom of her skirt.  After a bit more conversation, the girls head outside to get their photograph taken, though Alice gets caught up by the kimono sticking to her leg and Yune is having trouble walking in her new dress.  Camille asks her how she enjoys being in the bird cage and tells her that it becomes easier to walk in the longer she wears it.  While the girls are trying to sit still for the photo, we see Claude getting angry that Yune isn’t there and Oscar tells him to take a break and go pick up Yune if he’s so worried.  Though Claude initially denies that he’s upset, he does end up leaving to go get Yune and make sure she’s okay, much to Oscar’s satisfaction.  As Claude is walking over to Alice’s home, Yune and Alice are having a terrible time sitting still and Alice is soon distracted by a cat that crosses their path.  As soon as the photo is taken, she rushes after the cat and tries to pet it, but finds that her dress hinders her.  Camille makes the comment that the bird’s cage does not allow one to reach what they desire, but doesn’t elaborate when Yune looks at her questioningly.  Yune then chases the cat outside of the garden and bumps into Claude.  She tells him that she wants him to meet Camille, but she’s already gone.  When she invites him inside, Claude tells her that he’ll wait outside for her to get changed.  As he’s waiting, we do notice that Camille is watching Claude from an upper-story window with a rather saddened look on her face.  On their way home, Claude and Yune talk for a bit and Yune asks Claude what Camille meant when she said that a bird’s cage will keep you from reaching what you desire.  Claude gets a somewhat pained look on her face and doesn’t answer, instead telling her not to go over there very often.  A few days after her visit to Alice’s home, Yune receives a copy of the photograph.  She’s embarrassed by the look on her face (she was trying not to run after that cat) and Alice had a rather funny look on her face as well.  Claude laughs at the fact that there’s a cat tail in the middle of the photograph.  Oscar reassures Yune that there will be another time to get her photo taken and that seems to cheer Yune up a little. 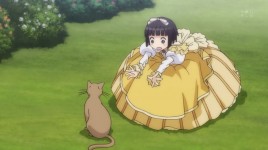 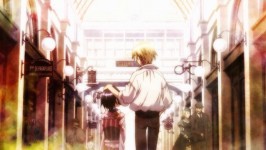 Opinions:  Surprisingly, Alice didn’t get on my nerves this week!  While she definitely has a sister complex, she wasn’t quite as annoying and I enjoyed that.  Yune being able to teach her some things was a nice change as well, instead of Alice acting like the haughty know-it-all that she had been previously.  The whole scene with the photograph was adorable and Yune really did look great in the frilly dress that Alice had her wear, but I think I like her better in her kimono.  I’m now starting to wonder if there’s something between Claude and Camille.  From the way Camille was talking about a bird cage, perhaps she and Claude were once friends and they developed feelings for one another, but due to their class differences, nothing could come of it.  The way Claude was acting by refusing to go into the house and even telling Yune not to visit very often is a telling sign that there’s obviously something going on between Claude and Camille.  I just hope that we get to find out what it is!