We’re nearing the end of the rather impressive Edolas arc now, as things begin to head to a close. This episode didn’t have much in terms of revelations, nor did it have any huge plot twists. What it did have, was some nice doses of action, and a very awesome Triple Dragon Slayer combo.

Before we get into all that though, its worth mentioning that Fairy Tail has been renewed for another season. Starting September, we’ll get moar Fairy Tail. For the oblivious viewer, this just means more uninterrupted Fairy Tail, and definitely more awesome. For the fans that really follow the anime series and its progress, this is a huge sigh of relief. Quite a few of you voiced concerns about Fairy Tail being renewed post Edolas arc, and well, seeing it confirmed is awesome. From what I hear, Fairy Tail only gets better and better from here, and I’m very excited to keep watching.

That said, this episode winded up feeling a bit short. I think its mostly because, in the grand scheme of things, not a lot actually happens. We start off with the confrontation between Faust and Jellal/Mystogan. Honestly, I found this to be a bit weak, as neither the parent nor the child really cared for the other at all. If anything Faust flat out denied that Mystogan was his son, or that he was a father at all. It was the general crazy talk that one can expect from Faust. Jellal/Mystogan was fairly awesome, though fairly useless in the major fight against papa XD 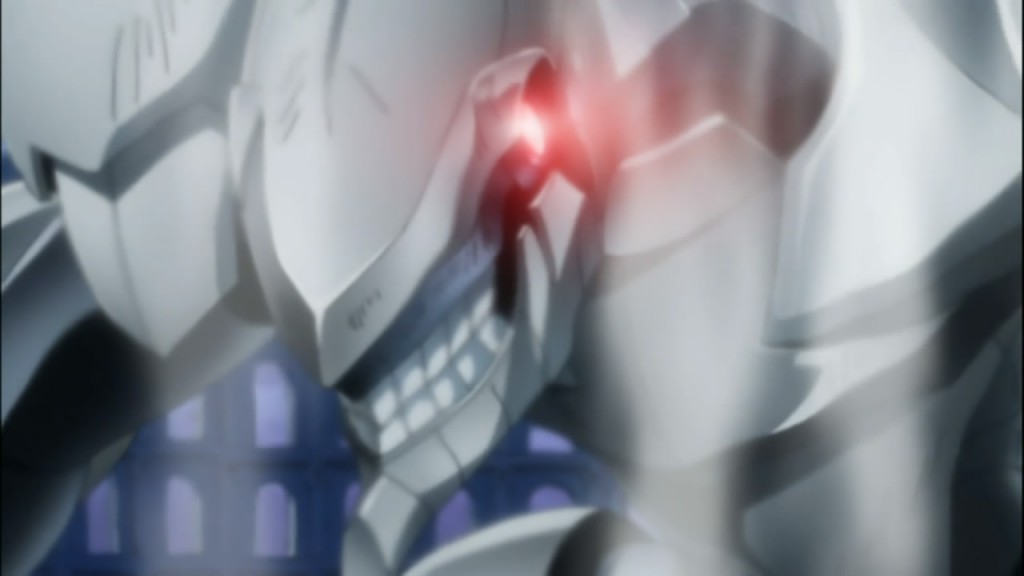 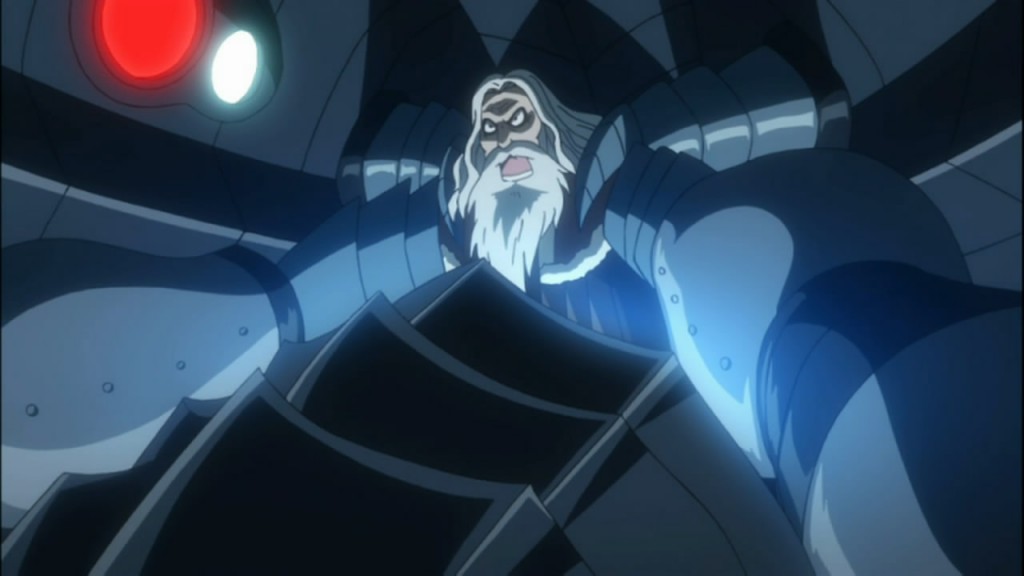 I gotta say, an Anti-magic Dragon Mech? Really? I just… I dunno. I feel a bit uncomfortable when I see mechs in my Fairy Tail, but I guess it works. Faust can’t exactly fight otherwise, and given that Edolas is all about using magic as more of a power source, it definitely fits. At the same time, it really feels like a cheapass way to make Faust seem like a viable threat. And even with the magic cancelling armor, the combo of Gajeel, Natsu and Wendy are able to do a decent amount of damage: 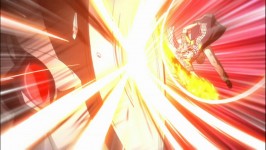 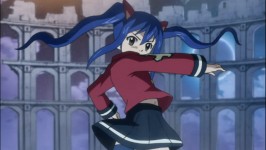 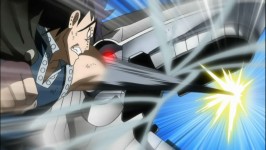 I admit, it was quite funny seeing both Natsu and Gajeel eating their way through the fight. I think Wendy’s support magic is pretty close, and definitely gave a very RPG-esque feel to the battle. Gajeel and Natsu attacked, while Wenddy continued to buff them up with supporting magic, AND she can heal people. Wendy’s pretty much your white mage in the party XD

Of course, none of that really mattered because Faust unleashed his Dragon armor’s   black form, and blasted the three to hell. It was then that we learned that Mystogan had actually gone down on purpose so he could save Panther Lily. Honestly, Mystogan is quite the schemer. He definitely doesn’t fight on  the front lines himself but alters events to a very good and positive end result. I have no doubt that old Mysto and Lily are about to start up a revolution in Edolas, while Natsu and the gang take down Faust in the meantime. Still, it really did feel like Mystogan was having the dragon slayers fight his fight, since they are taking down his Papa-san XD

And ah yes, the episode ended with an ambush and the start of the rematch between both Erzas. I definitely got the chills as both said that there was no reason for two Erzas, and that they’d duke it out to death. The whole line screamed epic confrontation: 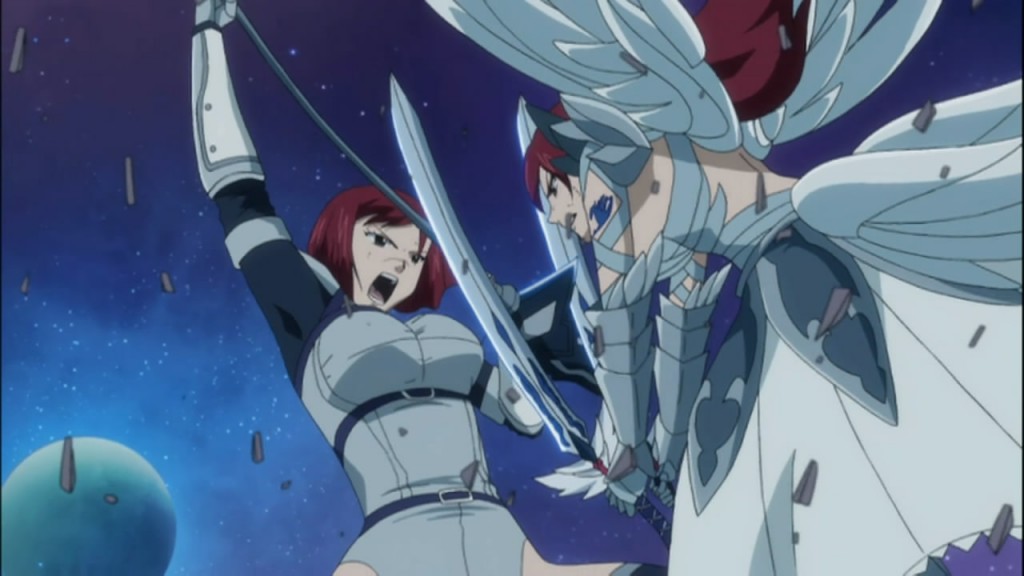 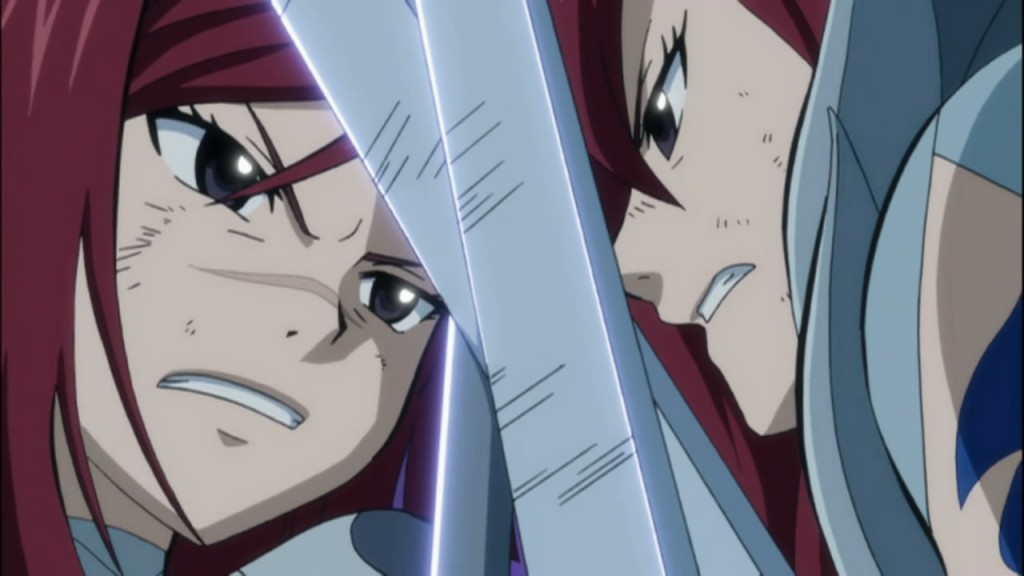 This fight continues until only one of us remains!

Its definitely going to be interesting going from here. Its about time for the cavalary to start showing up, and for the major fights to play out. Personally, I’m rather excited for the Knightwalker versus Scarlet Erza battle. I hope it delivers a bit  more than last time, where everything kinda happened off screen XD.

While not on my list of most memorable episodes, episode 91: Dragon Sense, did a decent job bridging the gap before the next round of awesome fights and twists coming ahead. As we near the conclusion of this arc, I gotta say, Its darn awesome to be a Fairy Tail fan these days XD

Edolas Fairy Tail to the rescue next week. Also, the two Grays finally meet! See ya all next week!