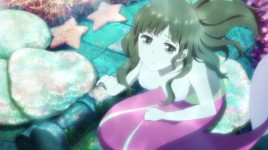 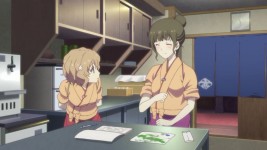 After the fiasco regarding the movie, I’m a little surprised that everything has gone back to normal at Kissuiso.  But then again, if the staff wasn’t phased by the movie being cancelled I don’t see why they’d be phased by it being a scam.  If they ever found out it was a scam, that is.  This week, the episode is centered around Nako, which is awesome.  The girl doesn’t get enough love!  The episode starts off with Nako at home with her family where she’s busy cooking dinner.  Her siblings are complaining because they’re hungry, but she tells them to relax because dinner will be ready soon.  Her little sister says something (I honestly don’t remember what) and Nako teases her about a monster who comes to eat little girl’s belly buttons; this causes her sister to panic and tuck her shirt in to hide her belly button quickly.  In another room, Nako’s parents are arguing about whether to praise a child or not and whether it will help them grow.  Nako scolds them for working all the time and tells them to get ready for dinner.  It’s not often to see parents apologizing to their child after being scolded, but Nako’s parents yield to her scolding and pack up their work to get ready for dinner.  After dinner, Nako reads a bedtime story about a mermaid to her sister.  While she’s reading it, she thinks about how if she were a mermaid, she would ignore the prince – not because she’s mean, but because she’s scared of anything outside of the ocean – and that all she’d do is swim freely and rest when she needed to.  We then find out that she considers her home her ocean and the one place that she can really relax and be herself.

The next day at work, Nako is serving tea to a middle-aged couple who ask her about the flowers that are in bloom.  They say that they’d like to go take some photos of the flowers, but Nako freezes and is unable to say what she wants to.  The couple smile at each other and tell her not to worry because going for a hike to find the flowers will be just as much fun.  After she’s finished serving the couple tea, Nako heads to the kitchen and pulls out a notebook and starts drawing a map with suggestions on where to go to view flowers.  She pauses and wonders why she couldn’t have just told them this in the first place, but continues writing out suggestions.  Ohana then shows up and asks her what she’s doing and Nako tells her that she’s just writing some suggestions on where to view flowers for a couple that’s staying at the inn.  Before Ohana can say anything else, Tomoe appears and tells the girls that there’s a meeting in the office.  Ohana asks her what it’s for and Tomoe grins, saying that it’s the paycheck they’ve all been waiting for.  This excites Ohana, but she’s disappointed to see that she only got 5,000 Yen.  Her grandmother informs her that because she broke a vase, she took 15,000 Yen from her paycheck to cover the damages.  Ohana is about to complain about how unfair it is when her grandmother tells her that it’s worth much more than 15,000 Yen and Ohana suddenly changes her tune and happily accepts what she’s been given.  However, everyone is surprised by the fact that Nako actually got a raise and earned almost as much as Tomoe.  Nako thinks about what her parents were discussing the night before and wonders if Ohana’s grandmother is trying to encourage her to change. 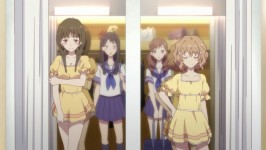 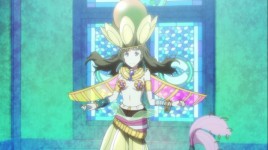 After the meeting, Nako and Ohana are cleaning the windows when Ohana starts complaining about how she can’t buy much stuff since she only got 5,000 Yen for the month.  She then asks Nako how many of a certain candy she could get if she had gotten her usual 20,000 Yen and Nako tells her that she’d be able to get roughly 750 pieces of candy.  Nako then wonders aloud if Ohana’s grandmother is trying to get her to change and become a better worker.  Ohana seems intrigued by this and starts washing the windows with gusto, but Nako tells her that she’s the type of person to get stuck on one aspect of something.  This irritates Ohana and Nako quickly adds “in a good way” to what she was saying, though this doesn’t do much to appease Ohana.  Ohana gets retribution by sneaking up behind Nako and pulling up her bangs, causing Nako to protest and beg her to let go because she doesn’t want people to see her forehead.  The next day at school, Yuina is asking the girls what they plan to do with their money.  Ohana admits that she won’t be able to do much because of the vase that she broke, which amuses Yuina.  Minko says that she plans on buying tilefish because she wants to try a method of cooking, but Tohru and Ren wouldn’t let her experiment with such an expensive piece of fish without her paying for it.  Nako hems and haws about what she wants to do with it, but decides to just save her money.  This irritates Yuina and she demands that Nako spend the money before telling her that they’re going shopping after school that day.  Unsure of what to do, Nako agrees.  Ohana and Minko tag along with Nako and Yuina to a clothing store and Nako’s not sure what to do.  Yuina holds up a couple pieces of clothing, but Nako shies away because she says Yuina likes to show too much skin for her liking.  She ends up trying on the same dress as Ohana because, as Nako put it, Ohana has a decent sense of style, likely because she grew up in Tokyo.  When the two pull back the curtain, the dress looks completely different on them.  On Ohana, it’s cute and frilly, but on Nako it’s a bit too short and actually pretty sexy.  The girls are surprised and Yuina grabs a bunch of accessories to throw at Nako, telling her to try it with those on.

When Nako pulls back the curtain again, everyone is stunned by how sexy she is and Yuina says that changing someone’s clothing can really change how you look at them.  This excites Nako and she decides to buy everything she’s wearing.  The girls then stop somewhere for a meal, to which Nako treats everyone.  On their way home, several guys try picking the girls up, but Yuina calmly tells them no and that it’s a girl’s night out and boys aren’t welcome.  None of the other girls realize that they’re trying to pick them up, so they just go along with what Yuina says.  That night, Nako is at home and lamenting about how she wasted her money on clothes that she can’t take back and ignores her mom’s questioning look before heading to the bath.  While in the bath, she thinks about being a mermaid again and how Ohana’s grandmother is somehow trying to get her to be a better waitress.  She then becomes determined to show her real self at the inn from now on.  The next day, we see Tohru and Ren arriving to work and Tohru notices a rather flashy bomber jacket that Ren is wearing.  He’s incredibly proud of it and says that he spent 150,000 Yen on it, but his excitement is gone when Nako rides up on her bike and tells him that he’s silly for wearing something so flashy.  Nako then sets about her normal tasks and sees a customer standing in the hallway, cheering for something (I honestly thought he was on drugs at first.)  Nako asks him if he’d like her to take his things to his room, but when he doesn’t answer her, she grabs the first bag she can and he screams.  It turns out that he was filming flowers blooming and she ruined his shot, so he has to start all over again.  Nako is summoned to the manager’s office and she apologizes for her action, saying she’s not sure how to become a better waitress.  Ohana’s grandmother seems a bit confused by this at first, but realizes what Nako was trying to say.  She pulls out a letter from the couple that stayed there a few days ago and they wrote a letter thanking Nako for all of her help and they said they plan on staying there again, especially to see Nako.  Ohana’s grandmother goes on to say that at the inn, she’s shy and a bit more concerned with things, but she notices things no one else does and that’s the sort of waitress she is and she shouldn’t try and change that.  Between that and the letter, Nako is unbelievably happy and feels as though she finally found her spot in the world and that she’s not afraid to venture out of her ocean anymore. 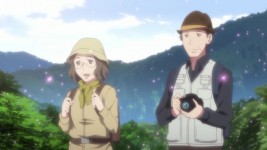 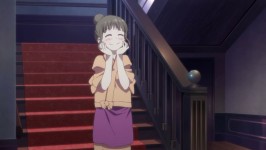 Opinions:  This was a nice episode, especially since we finally got an episode that centered around Nako.  Seeing how she acts at home is completely different from how we normally see her, but it’s also a nice contrast from seeing her at work.  The fact that she gets so shy as soon as she’s talking to someone outside of her family is endearing, but I’m also worried about how that will affect her after she graduates and has to find a job (unless she decides to stay at the Kissuiso).  Seeing Yuina try to change Nako’s image was amusing and I think it worked for a little bit, but I wouldn’t be surprised if Nako went back to the way she normally dresses.  Overall, it was a really solid episode and now I want an episode that’s centered around Minko!