Better late than never! Is what I like to say. xD  Yes, I am very late…I know that already.  Come on and read my review anyway. ;o; I’m begging you! If you don’t read it, I’ll send some parasatic bees your way!

Summary: Nezumi and Sion having managed to escape from No. 6 proceed to go underground to Nezumi’s house  Nezumi goes on ahead to take a shower while Sion remains in the room and reads a book to one of the mice. Nezumi comes out of the shower and makes fun of Sion stating that he would make Macbeth cry. We learn that No. 6 discouraged its citizens from reading classic literature. Sion later on takes a bath and starts to think about having survived and that he hadn’t thanked Nezumi. After getting out of the shower, Sion asks Nezumi if there is any way that he could contact his mother. Nezumi gets pissed off and tells Sion to get rid of all unnecessary emotional package because that would only bring him down. They get into an argument and both end up being buried under the books.

It is then that Nezumi notices that Sion has black marks on his skin. Sion screams as pain takes over his body. He asks Nezumi to cut a blister on his neck. Sion, engulfed by pain cries and says he wants to die. Nezumi gets upset by this and yells at Sion to stay awake. After a bit more pain, Nezumi is able to cut the blister off Sion’s neck and Sion survives.

A few scenes later Sion wakes up to find himself with beautiful white hair and a red snake like scar wrapped around his body. Nezumi finds him sitting on the ground and asks him if he regrets living. Sion says that he does not regret it and that he wants to live. They proceed to eat and discuss the larva that Nezumi took out of the blister in Sion’s neck.They come to a conclusion that it is some sort of parasatic bee which makes humans age at an alarming speed and kills them.

Sion insists on helping No. 6 come out of this crisis but Nezui refuses to help him, stating that he hates No. 6 and even laughs hysterically at the idea of No. 6 collapsing due to a virus. Sion is anguished to see Nezumi’s attitude and Nezumi apologizes. Afterwards the two go out and head towards Inukashi’s hotel where they are surrounded by dogs. Inukashi later on shows the around the hotel and shows them a note which she found. Sion takes it out of hand and sees that it is a note from his mother (Karan) giving him an address. Nezumi was the one that sent one of his Mice to deliver a note to Sion’s mom that Sion was alive. Sion is ecstastic at the idea of being able to communicate with No. 6, saying that they could contact the health department and tell them about the parasatic  bee. Nezumi becomes angry and tells Sion that if he decides to help No. 6, they will become enemies.

Oh man, they switched so many things around. Are there any novel reader’s out there? If there are, then you guys totally understand my frustration, right?  Right?! D:

Anyway, I have to admit that it was a bit annoying how innocent and naive Sion is but one can’t really expect much from him seeing how he grew up in a sheltered enviroment.  Mmmm, Inukashi was introduced very soon and they even made her be the one to get a hold of the note. Well, there goes my beloved Nezumi/Sion moment. Le sob. ;o;

If there’s one thing that I really like about Bones animating No. 6 is the quality in anime. The quality is simply gorgeous. Its such a shame that No. 6 is only an 11 episode anime. Things are getting cut and the pacing is all over the place. I feel this anime would’ve been glorious as a 24 episode show. Ah well. :/

Anyway, off to the screecaps! 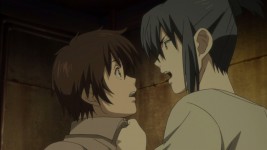 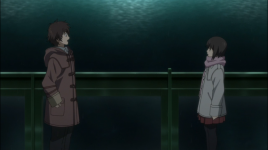 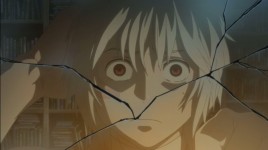 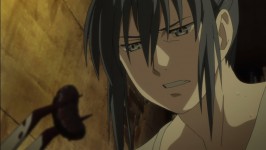 Nezumi: The hell is this Sion? Are you turning into that bug guy from Naruto?!

PROOF THAT NO. 6 IS TOTALLY HETEROSEXUAL….lol no: 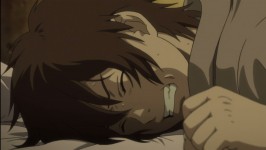 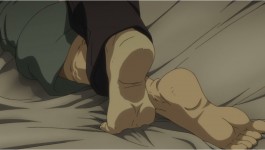 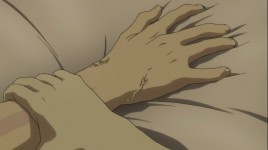 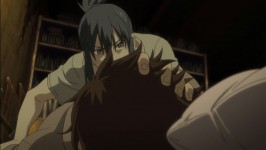 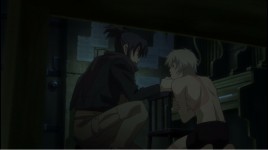 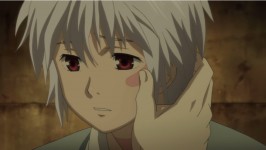