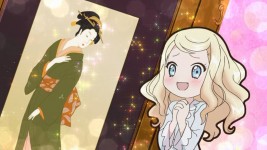 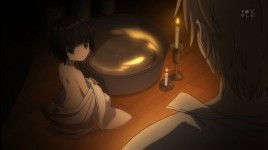 I think I was right when I predicted that there would be a bit of a conflict and tension this week.  All I have to say is that Alice needs to grow up and get over herself.  After last week’s fiasco with Alice finding out that Yune is staying in the Gallery, we actually start off the episode on a light-hearted note.  Yune is attempting to eat cheese again, but this time she’s dipping it in soy sauce.  She’s wary at first, but then says that it doesn’t taste too bad with soy sauce (which I have to agree with).  Claude and Oscar walk in and Claude asks her what the “smelly” liquid is and Yune is instantly offended and tells him that it’s not smelly, but delicious.  Oscar chuckles and agrees with Yune, telling Claude that the Japanese use soy sauce to season dishes, especially beef dishes.  Claude doesn’t seem to believe them but Yune convinces him to let her cook dinner for them to show him that Japanese food can be just as delicious as French food.  Claude reluctantly agrees, but tells Yune that if he doesn’t like it, it will be the first and only time she cooks Japanese food for them.  Yune happily agrees to the conditions.  Later that evening, they have a visit from Alice’s butler, whom was sent to find Yune and invite her to tea, and Claude is instantly wary of him.  Claude demands to know what he wants and the man simply informs him that he is there on the behalf of Alice to invite Yune to tea.  He hands Yune – who came out to investigate – a large bouquet of flowers, but she still refuses the offer after Claude tells her that he shouldn’t go have tea with her.  After the butler leaves and everyone heads to bed, Yune sneaks downstairs and begins to fill a tub with water in order to take a bath.  Unfortunately, all of the noise she’s making wakes up Claude and he walks in on her stripping and in her surprise, Yune flips over the tub of water and spills it all over the floor.  The commotion wakes up Oscar and he comes downstairs to find Yune and Claude frantically trying to mop up the water.

Meanwhile, Alice is taking a bath and being scolded by her maids for staying in the water too long.  She scoffs and tells them that in Japan, they stay in baths all day (which I don’t think is entirely true, but okay then) and the maids just look at each other and shrug.  After getting out of her bath, Alice’s butler informs her that he delivered the invitation to Yune.  Alice becomes excited and asks him what she looks like and when she’ll be coming for tea.  Her butler smiles gently and tries to break it to her that Yune refused the invitation.  This upsets Alice and she demands that they get Yune to come for tea.  The next day, Yune is apologizing profusely for the incident the previous night and while Claude is annoyed because of the water they wasted, Oscar is sympathetic.  He tells Claude that in Japan, people take baths every day and that it’s probably hard for Yune to adapt to not being able to have a bath everyday.  Claude doesn’t seem to understand that, but he does feel a bit sorry for Yune, so he scrounges up enough money for the two of them to go to the public bath.  But before he can tell her, Alice and her maids appear and corner Claude and Yune.  Alice is determined to get Alice to come with her to have tea – and stay with her forever – but Claude and Yune manage to dodge her and leave the store for the public bath.  Unfortunately, the bath house is closed and Alice is delighted that Claude’s plan is thwarted.  After following them around, Alice finally persuades Yune to come to her house for tea.  When Claude becomes angry about it, Yune placates him by saying that she feels bad for refusing her offer when she doesn’t even know her.  Claude watches as Yune joins Alice in the carriage and stomps off when they’re out of sight. 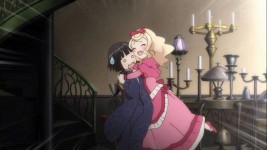 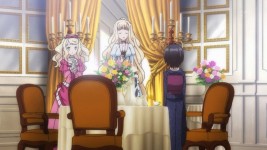 Once at Alice’s house, Yune is happy to find that the tea tastes better than coffee and Alice picks up on that.  She laughs (more like crows) and tells Yune that only men drink coffee, so she assumes it must make things difficult to not be around other women.  Yune doesn’t say anything, but you can see that she’s feeling upset about all of Alice’s trash-talking.  Alice’s sister then enters the room and is a bit startled by Yune sitting there, but Alice introduces them and Yune hastily bows and introduces herself.  Alice’s sister seems to take a liking to Yune and asks her why she’s blushing.  Alice blushes more-so, but tells them that she thinks that their eye color is beautiful and so is Oscar and Claude’s.  Alice runs to her and tells her that her jet-black eyes are beautiful too.  She suddenly grabs Yune’s hand and drags her out of the room to show her the room she can stay in.  Yune is awed by the beauty of the room and when Alice tells her about the bath, she can’t help but be persuaded to take a nice, hot bath.  While in the bath, Alice continues talking to her about how she should stay with her and that she’ll be able to have the best food and baths every day.  Though tempted, Yune suddenly remembers her promise to Claude and Oscar and bolts out of the bath, saying she has somewhere to be.

She informs Alice that she made a promise to Claude and needs to return home.  Alice is displeased by this and attempts to bribe her into staying by saying that if she wants her mother’s kimono back, all she needs to do is stay with her and she’ll give her the kimono back with no charge or strings attached.  Again, Yune is incredibly tempted, but says that Claude promised to get it back for her and she promised to believe in these promises.  Meanwhile, we see Claude sulking in his room about the fact that Yune has yet to return home and thinks that she’s left them to stay with Alice.  He’s surprised to hear some clanking in the kitchen and when he goes downstairs to investigate, he sees Yune preparing dinner.  She apologizes profusely for being late and Claude simply leaves her alone.  He does notice Alice standing there and while he’s not pleased, he and Oscar invite them to stay for dinner.  When Yune reemerges from the kitchen, Alice is a bit confused but soon realizes that this was her promise and she’s not amused at all.  The group eats their meal and Claude tells her that he doesn’t like it, but both Alice and Oscar seem to enjoy it.  Claude asks Alice why she let her come home and Alice admits that Yune got on her hands and knees and begged for over an hour until she gave in.  Claude chuckles and says that he knows that pose well and it’s hard for anyone to say no to her.  After dinner, Alice excuses herself and heads home, but is determined to get Alice to stay with her forever.  Later that evening, Yune ventures downstairs for something and sees Claude eating the leftover dinner.  She teases him, saying that she thought he didn’t like it and Claude tells her that since she’s making an effort to enjoy things that are French, he should make just as much of an effort to learn to enjoy Japanese cuisine and their culture as well.  Yune seems delighted to hear this and leaves him to his eating. 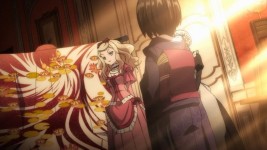 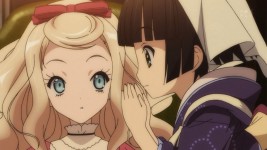 Opinions:  I swear, I could just make the whole review “Yune, why are you so adorable/cute/etc.?” and be done with the review.  Once again, she’s adorable as ever though I think she really handled herself well here.  Despite Alice tempting her with warm baths everyday and even her mother’s kimono, she still refused to leave Claude and Oscar because of the affection that they’ve shown her.  It was a really grown-up decision for her to believe in Claude’s words that he’d buy back the kimono, even though Alice said that he’ll never be able to buy it back.  Seeing Claude making an effort to learn more things about Japan and try to like their cuisine was endearing and I think it really meant a lot to Yune.  As for Alice…she’s still annoying and needs to get over herself, but I think that once she and Yune become friends, she’ll become a lot more of a likeable character.  Here’s to hoping anyway.