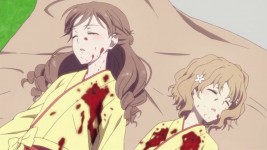 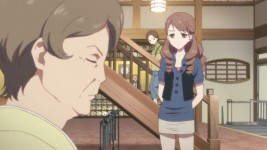 I’ll admit, I had a bad feeling about this episode after the ominous ringing of the telephone at the end of last week’s episode.  It seems that to an extent, I was right about my suspicions.  The episode starts off with Yuina wandering around the Kissuiso and looking rather suspicious.  She jumps slightly when she runs into Ohana, who looks rather angry to see her and dashes down the stairs, only to be cornered by Nako.  With no other option, she throws open the window and jumps out of the second story window!  Thankfully, it’s all part of the movie that is being filmed and she safely lands on one of those big balloons that stunt doubles use when doing jumps.  The director yells cut and we see several of the actual guests at the inn watching on in shock and awe.  Meanwhile, we see Enishi and Takako entering Ohana’s grandmother’s office, where she gives him the official stamp of the inn.  As she gives it to him, we get a small flashback to when the phone was ringing oh-so-ominously in the previous episode.  Turns out, I was right in thinking that it was Ohana’s mom was calling, though it was for a different reason that I initially thought.  She calls to warn her mother about the director that was hired to do the movie because she’s heard rumors of him scamming people by cancelling the movie plans shortly after receiving payment.  Ohana’s grandmother tells her that it’s entirely in Enishi’s hands and she has nothing to do with the proceedings.  She pauses and then asks Ohana’s mom if she’s sure she doesn’t want to take over the inn when she retires.  Ohana’s mom laughs and tells her that they both know she’s not cut out for running and inn and her mother agrees with her.  The phone call ends shortly after that.

Later, Ohana is serving an older couple who was watching the shoot with Yuina and the woman is telling Ohana how exciting it is that a movie is being shot there.  Ohana happily informs them not to worry since they’ll still be at their service, just as before.  The woman tells her that it’s alright, though she nearly had a heart attack when Yuina jumped out of the window.  Ohana smiles wryly and tells her that she should avoid watching what is being filmed next.  We soon find out that she’s right, since Ohana and Yuina are both shot for some odd reason.  Nako and Enishi are watching on and Nako wonders what sort of movie it’s supposed to be (something I was starting to wonder at that point); Enishi tells her that it’s supposed to capture the essence of summer.  Somehow I – and likely Nako as well – don’t believe him.  After the shoot is done, Nako approaches Ohana and Yuina, but is scared by the fake blood coating their bodies.  Ohana whispers something to Yuina and the two rise to their feet and start chasing after Nako, groaning like zombies.  Afterwards, Ohana is retrieving meals for the Wisteria room when Tomoe tells her to hold on and holds out a compact.  Ohana still has a little bit of the fake blood on her nose; she laughs as she wipes it off, saying that that must be why she was getting stared at.  Before Tomoe can say anything else, Ohana is already out the door.  Later that afternoon, Enishi and Takako sign the contract with the director and hand over the payment and paperwork.  The director packs up his crew and equipment shortly after and heads out, saying he’ll be stopping by the next day to begin shooting for real.  Enishi is so excited that what comes next is a complete under-handed blow to him and his ego. 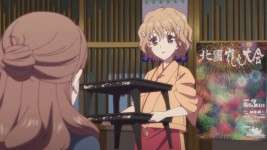 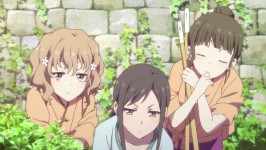 The next day, we see Yuina walking through the entryway of her family’s inn and overhears her grandmother talking with a few of the other inn owners.  It turns out that Ohana’s mom was right and the director was a complete scam.  The inn owners simply shake their heads and say that Kissuiso has really done themselves in this time, but when Yuina tries to interject, her grandmother snaps at her and tells her that it’s none of her concern.  Worried about Ohana and the others, Yuina rushes to the Kissuiso as fast as she can and finds Ohana preparing to set up the dining hall.  Ohana smiles wryly and tells Yuina that the movie was cancelled and that it’s a shame since she thought it would make it the summer to remember.  Yuina murmurs something about how she was worried, but laughs it off and heads back home after seeing that no one is devastated by the change.  Meanwhile, Enishi and Takako are panicking and trying to get a hold of the director with no luck.  Of course, Takako is doing all of the work since Enishi is too shocked and upset to do anything but whine at her about how they were in this together and he doesn’t know what to do.  Takako snaps at him and tells him that she had a bad feeling about this from the beginning and when Enishi asks her why she never said anything, she tells him that she told him not to rush the payment, but he wouldn’t listen.  She soon storms off, infuriated with the fact that Enishi is completely inept at doing anything right.  Later, Enishi receives a phone call from his sister and she starts off with saying that she’s “just talking to herself” before informing him that several other people have been scammed by this guy.  Apparently he’s up to his neck in debt and is scamming people by saying he’ll film a movie, but then running off with the cash.  She tells him that it will be hard to get the money back since he’s likely already spent it and then hangs up.  Enishi calls her back and tells her thank you for the information but assures her that he’ll take responsibility for what happened before hanging up.  Ohana’s mom seems happy that her little brother is finally stepping up to the plate.

Meanwhile, Nako finds Ohana getting ready to clean the pool and asks her why.  Ohana says that it’s become part of her daily routine and it’s nice to have a working pool, even if it was only supposed to be for the movie.  Nako agrees and they run into Bean Man and he informs them that Minko has already headed down there to start cleaning.  While the girls are cleaning the pool, we see a scuffle in the inn between Enishi and Takako.  Enishi is begging Takako not to leave when that’s all she wants to do.  She yells at him, saying that she’s tired of babysitting him; Enishi is flabbergasted and throws out the only English he knows, which makes Takako laugh at him.  He then goes to hit her, but is deflected as Takako expertly grabs his wrist and slaps him silly.  She then storms out, Enishi hot on her heels.  Somehow they end up by the pool and after a brief, but very loud, argument – to which the girls are aware of, since they’re hiding in the bushes – Enishi falls into the pool and starts flailing around.  Takako sighs and tells him to stand up, which he does, and she calls him pathetic.  She offers him her hand to help pull him out, but he manages to pull her into the pool with him.  She screams at him, saying that he ruined her “battle gear” and it’s expensive, but Enishi is just happy to hear that she was just as invested in this movie as he was.  The two reconcile (somehow, I’m still not sure how Enishi managed that) and the girls sneak away.  Meanwhile, Ohana’s grandmother goes to the council of the neighboring inns and apologizes for the trouble they’ve caused over the last few days.  Later, when she returns, she calls Enishi to her office and he apologizes for not going to the board to talk to them in person.  She said it’s fine and the two of them reminisce about when Enishi and his sister were children and Enishi says that if he had listened to his mom when he was a kid, his teen years may have been entirely different.  As the two have a nice heart-to-heart talk, Ohana is watching some planes fly overhead and Jiro runs out to her, exclaiming that he finished the script.  Seems like no one bothered to tell him the movie was cancelled. 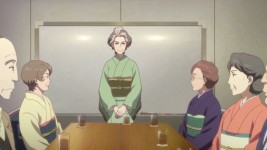 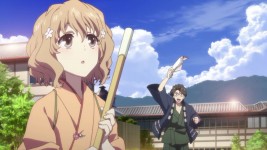 Opinions:  Yet another solid episode!  I’m glad that Enishi finally grew a pair and took responsibility for his actions, though I still think he’s kind of a wimp and a push-over.  I had a bad feeling about the movie from the beginning, much like a lot of the characters and I was afraid that it’d be a scam or something.  Too bad that I was right about that.  Seeing Ohana’s mom become worried about the inn and her family was touching and it was even more touching to see Ohana’s grandmother act like a mother to Enishi instead of his manager.  Their little heart-to-heart talk really touched me and it’s so refreshing to see Ohana’s grandmother actually do something sentimental like that.  But I had to laugh at Jiro.  It sucks that no one bothered to tell him the movie was cancelled, but I honestly didn’t notice he was missing from the episode.  It looks like no one else noticed he was missing, lol.