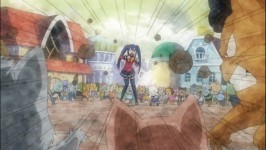 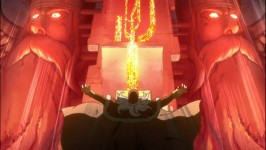 Things are definitely getting intense as we are one episode shy of the 90 mark! This episode was mostly a transitional episode, though we did see some rather quick progress in some of the fights, especially Erza and Gajeel’s battles. It seems like Fairy Tail is back to “build up” mode for a huge epic battle coming up.

That said, this episode started off with a Happy sensei lecture. Like before I got the feeling that this was to delay the episode’s content, but since everything happened at a decent pace in the episode, I didn’t mind as much. Still, call me paranoid, but these recaps seem a tad bit unnecessary, especially since we have another sort of recap in before the OP.

The episode actually opened up with Carla and Wendy’s  attempt at trying to warn Extalia. Of course, the Exceeds did what probably everyone expected them to. Instead of listenning to Wendy or Carla, they ended up throwing stones at them and laughing at them.  I’ve got to point out that the Exceed are really disgusting, cruel creatures, with an immeasurable amount of arrogance. It is interesting to note that Naddy did actually seem a bit worried. This leads me to beleive that the Queen may not be as all powerful as everyone believes. I think what makes me even more convinced of this, was actually in Gajeel’s fight.

In the exchange between Gajeel and Panther Lily, we got to see that Lily had forsaken his country, calling it a fake kingdom. That leads me to believe that there is definitely something odd happening in Extalia. Speaking of Gajeel and Lily, their fight progressed quite a bit this week. We got to see Gajeel identify with Lily, as he too was an outcast of sorts in Fairy Tail, and then we got the most entertainingly hilarious line in the entire episode: 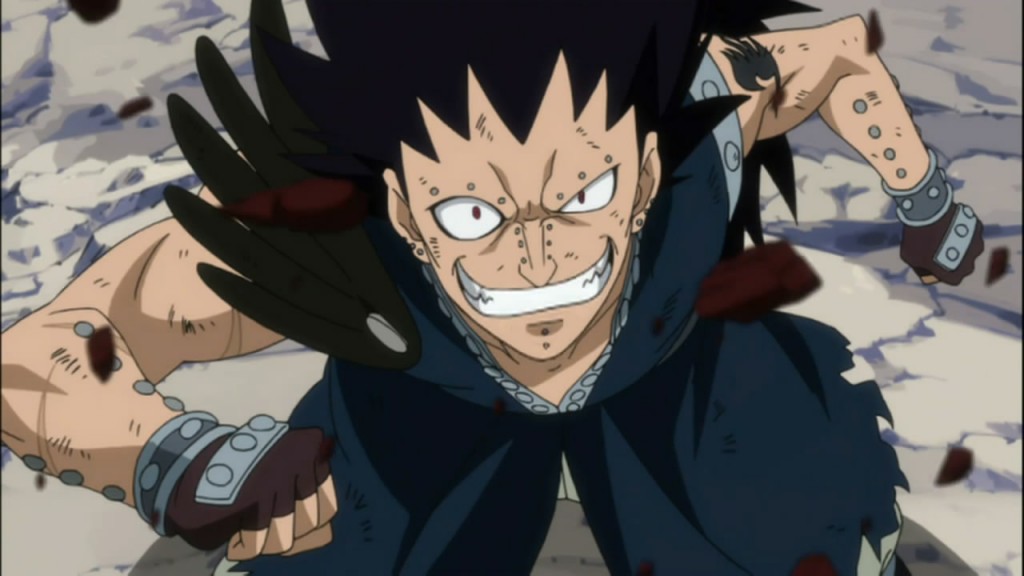 I’m making this guy MY CAT!

That was so totally Gajeel. Gotta admit, I actually don’t mind the idea of a Gajeel/Panther Lily combo, although I’m very doubtful about it happening. Still, it would definitely be friggin awesome. Gajeel sure seemed to think so, and totally went berserk, Breaking Panther Lily’s sword and then smacking him good in the face: 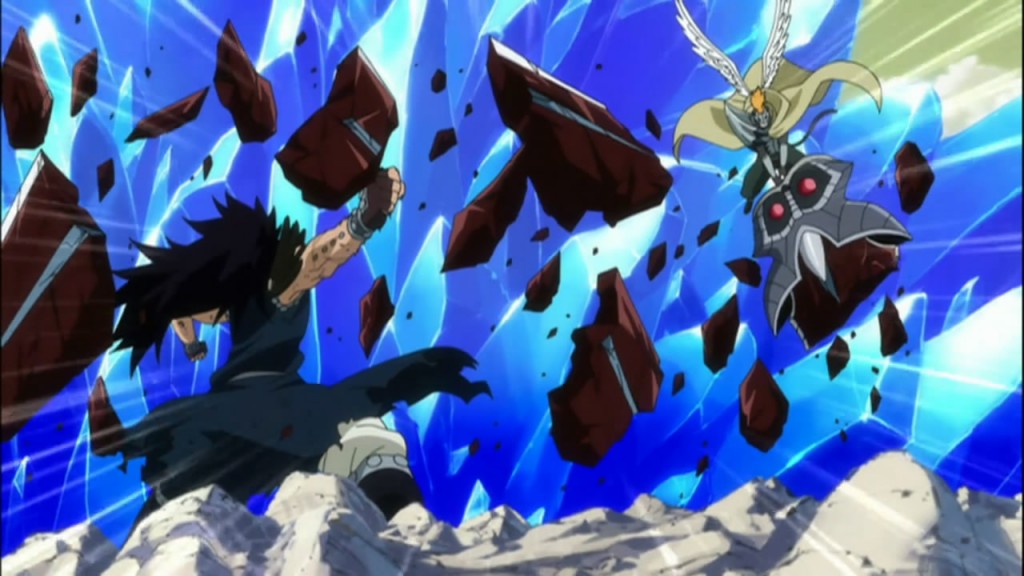 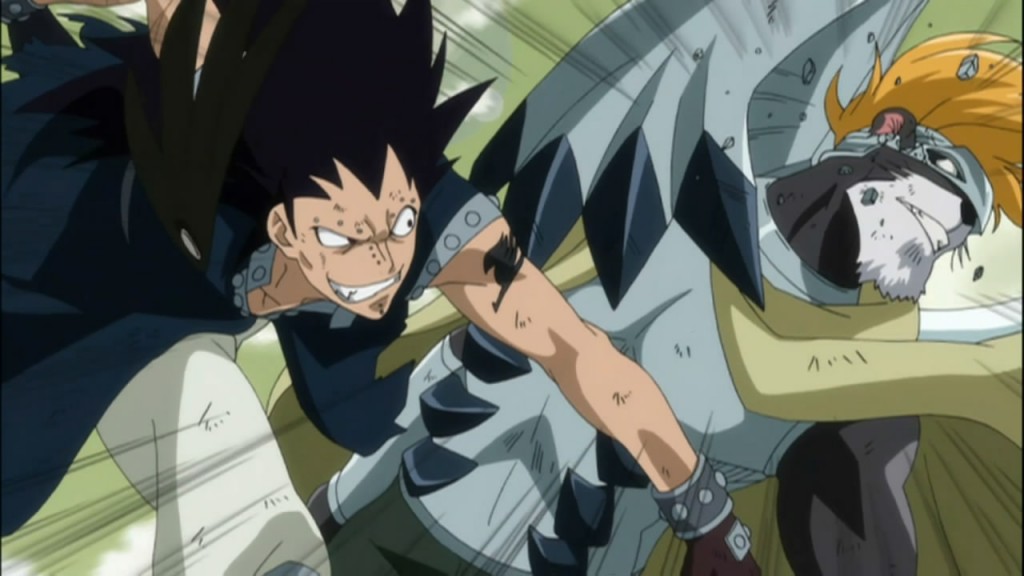 On the other side of things. We had Gray and Natsu trying to think of some way to get into the Dragon Chain cannon chamber, as it had a magic ward on it. And of course, the series couldn’t resist making a fool of Lucy and taking a jab at her “assets”. Gray and Natsu were able to make it inside once Erza came into the picture. I gotta say, the whole switch the Erza plan, I saw from a mile away. It wasn’t a bad plan though, and it definitely got Faust fooled, and ontop of that, got him captured: 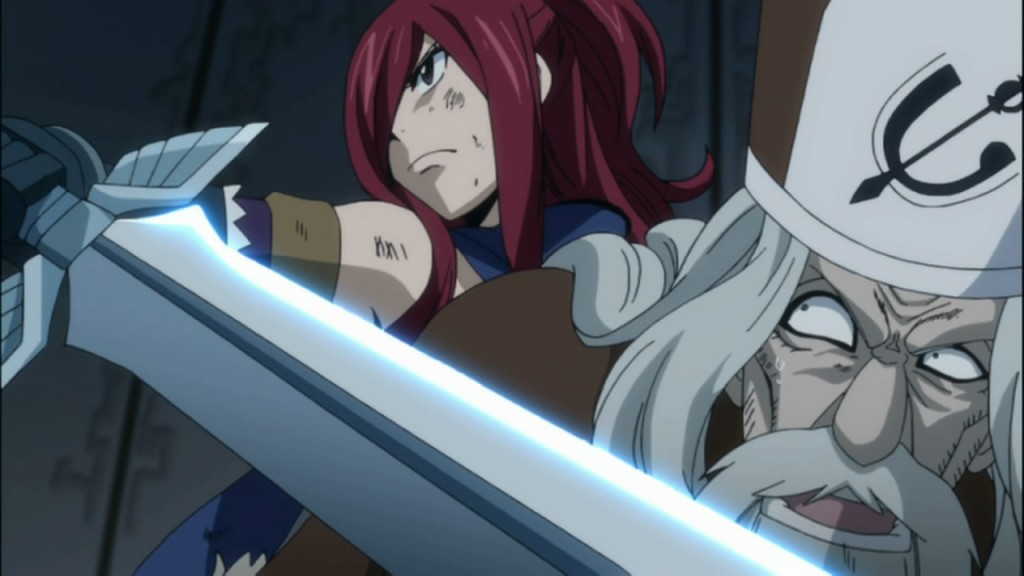 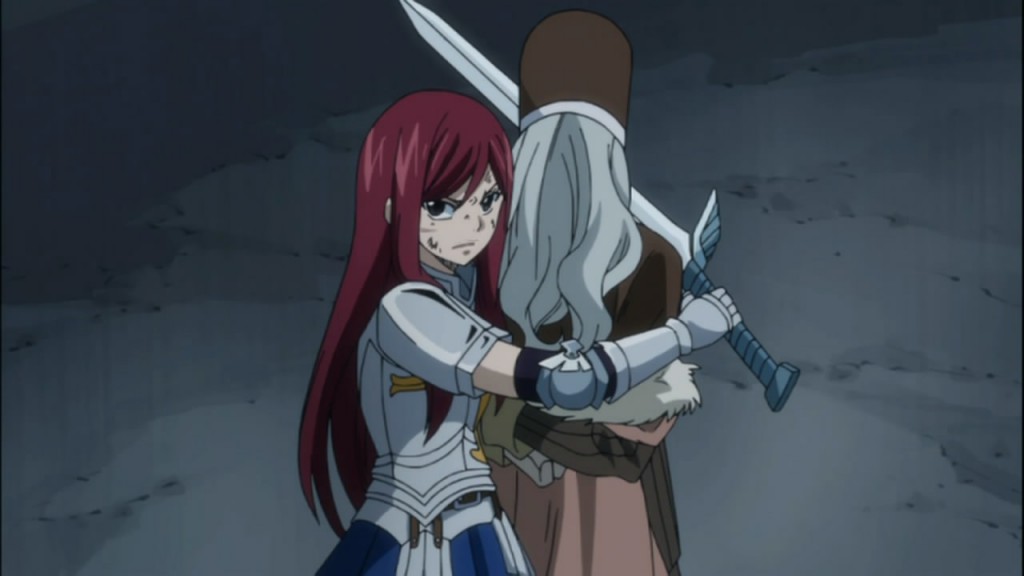 I gotta say though, Faust may be many things, a coward isn’t one of them. While he was being held hostage, he barely cared about himself at all, which is definitely something that any crazy old power hungry old psycho would do. Of course, Erza Knightwalker had to break in and ruin the moment, and the Dragon chain cannon was FIRED! 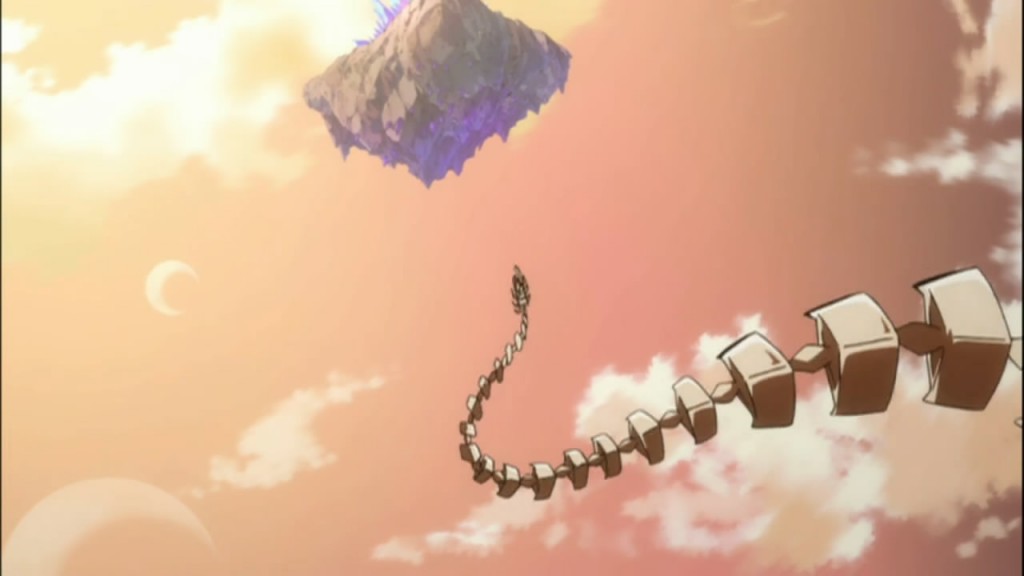 It was interesting to note, that the Dragon Chain Canon was… an actual Chain XD. As things looked bad all around, Lucy and Coco came to the rescue, and with none other than a Legion: 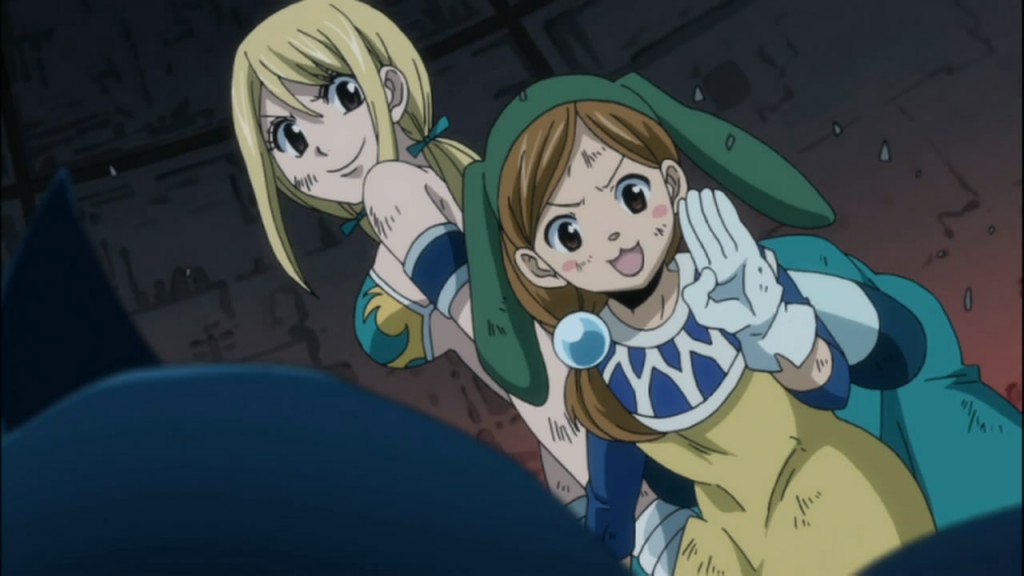 Okay… so one of those big creatures that hangs around Edolas, Coco seems to have tamed one. I bet Faust is super friggin pissed he didn’t take Coco down for good when he had the chance. Either way, we have Natsu and co racing towards The Lacrima, as Gajeel and Panther Lily continue to duke it out.

All things said and done, I did feel a bit disappointed that we didn’t see much of Gajeel or Erza’s fights. Gajeel’s fight pretty much shifted gears waaay too quickly, which made me wonder why he didn’t just go full force from the get go XD. And we have no idea how Erza Scarlet took down Knightwalker, but its clearly noted that Knightwalker is far from happy: 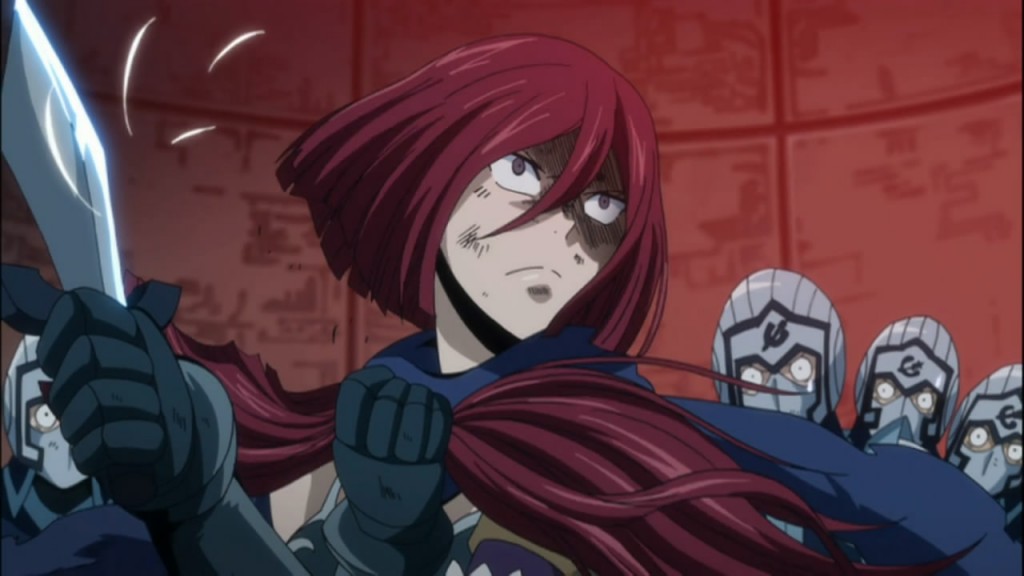 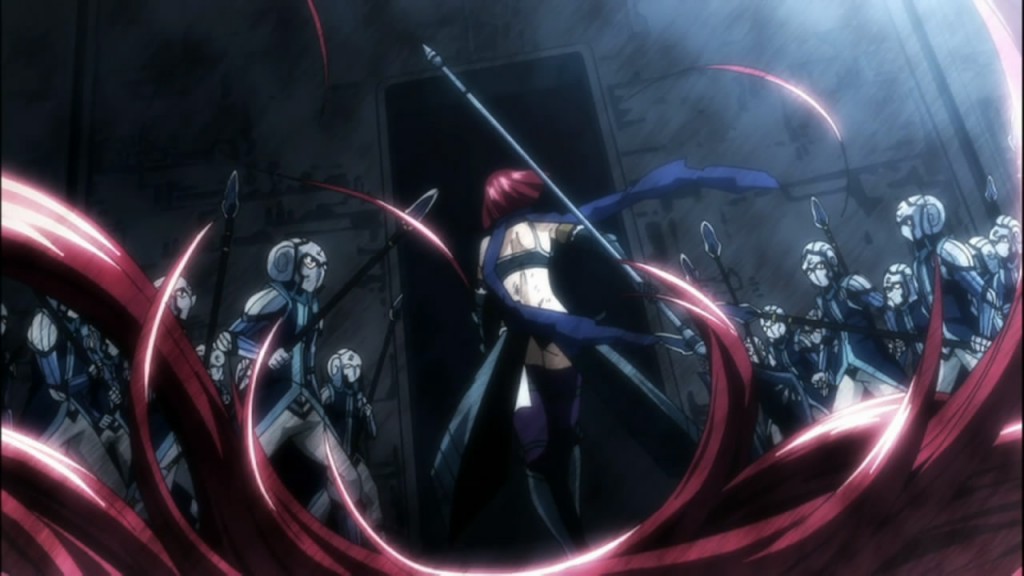 I wonder if it actually had something to do with the hair? Either way, Short haired Knightwalker does look more badass. Good episode overall, things progressed nice and quick! With both Knightwalker and Faust pursuing our Fairy Tail heroes, I think its safe to  say that some epic stuff is going to happen next. 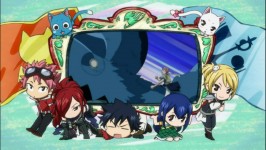 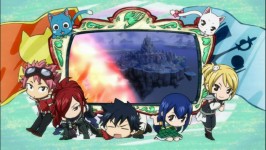 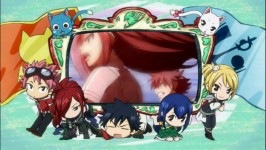 Our heroes rush towards the Lacrima, as it gets ever closer to Extalia! See you next week! :O