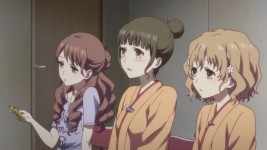 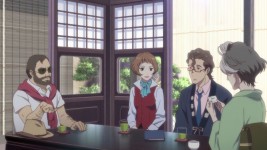 After Yuina’s revelation that working at an inn may not be such a bad job afterall, I wasn’t really sure where the show would be going.  I can definitely say I wasn’t prepared for what happened this week.  The first thing we see this week is Enishi meeting up with someone who looks like he could be a photographer or director, though we’re not sure.  Enishi points out Yunosagi to the gentleman and the man is in awe and says that he’ll be able to get some great shots from the scenery.  As they’re discussing something, several buses pull up, each with the name of the new resort that opened up nearby.  Enishi seems downtrodden as they pull up and his companion is awed by the fact that although the resort just opened, they already have a lot of guests.  Meanwhile, a meeting between the neighboring inns in Yunosagi is going on and they’re trying to figure out what they can do to compete with the new resort in town.  As it turns out, they brought Ohana, Nako, Minko and Yuina to the meeting in order to get fresh ideas for what the younger generation expects from an inn.  Ohana begins spouting off ideas such as a buffet that’s open all day and serves meat and cake and Nako quietly mentions something about a pool to go swimming in.  While they’re shouting out all sorts of crazy ideas, Minko is busy staying quiet and Yuina is ignoring the whole conversation and texting someone, which doesn’t exactly give the illusion that she had a revelation in the previous episode.  After the meeting, Ohana, Nako and Minko return to Kissuiso to find Tomoe spying on Enishi, Takako and the gentleman from before.  As it turns out, Enishi and Takako have cooked up yet another crazy plan to garner attention for the inn and they’re requesting an audience with Ohana’s grandmother.

Once their request is granted, Takako and Enishi go about trying to convince Enishi’s mom that creating a movie about the Kissuiso to try and advertise the inn.  Enishi doesn’t seem super excited about the idea, but when his mother gives him permission and tells him that he has free reign to do what he wants, he seems to perk up a bit.  As it turns out, the gentleman that was with Enishi is a director and they’ve already begun coming up with ideas for the movie.  Of course, Tomoe is eavesdropping on the whole thing and rushes out to tell Ohana and Nako about the big news.  When she tells them, Nako is so excited that she actually ends up destroying the poor bonasai tree she was clipping, but the three girls ignore the damage and begin coming up with a plan to get cast in the movie.  Minko walks in on the trio huddled in a corner and ignores them when they beckon her over.  Later, after cleaning a room, Nako and Ohana are daydreaming about what kind of part they might be able to play in the movie.  Nako says that she wants to be a spy that was an ex-Olympic diver and Ohana wonders what it would be like to be a spy.  Minko passes them and Ohana asks her what she’d want to be in the movie and when Minko says a chef, Ohana tells her that she can be anything she wants to be.  This just angers Minko, so I think Ohana didn’t get the point of what Minko was trying to say.  Meanwhile, Tomoe is in the kitchen telling Ren and Tohru about the movie that will be made and Tohru seems really excited about it, but once Tomoe mentions that they might be in the movie, Ren becomes so nervous that he botches chopping the cucumbers.  Minko becomes irritated and declares that she’s going to go peel the daikon radishes, but once outside she seems contemplative about Tohru looking good in a movie.  That evening, the director informs Enishi that he’ll be returning the next morning with the actresses and Enishi really seems excited to hear that. 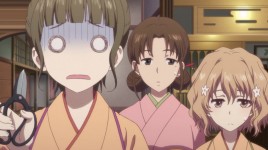 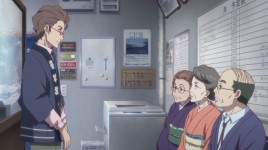 The next day, Ohana and Nako are outside playing around when they notice some people walking towards the inn.  It turns out, they’re owners of several of the inns in the area and they’re requesting a small meeting with Enishi about the movie.  During the meeting, they ask him how much they should chip in for the advertising costs and then ask him to film the movie utilizing all of Yunosagi.  Enishi firmly denies them, saying that the movie is to feature Kissuiso only, though this surprises the other inn owners.  They then ask why they’re chipping in and Enishi happily tells them that he never said they had to.  The other owners walk away saying that they were surprised to see Enishi become such a good business man.  Meanwhile, Enishi nabs Ohana and Nako and informs them that their job for the day is to clean out an old, abandoned pool on the grounds.  At first they’re confused, but Enishi elaborates, saying that since the movie is being filmed in summer, a pool is the embodiment of summer fun.  While the girls set about cleaning the pool, the actresses arrive and they begin doing test shots.  After a long day of filming, the actresses are shown to their rooms and Ohana’s grandmother brings them their tea personally.  They chat for a few minutes about the inn and the actresses say that they would love to make a personal visit to the inn someday just to relax.  Takako then comes in to discuss the movie and Ohana’s grandmother excuses herself.  Meanwhile, all of the test shoots are going on and the director asks Jiro to write a 40-page script for the movie and while he’s surprised, Jiro is also very flattered and eagerly sets to work on the script.

While all of the test shooting is going on, Ohana and Nako are hard at work cleaning the pool.  It almost looks like they are nearly done when Minko decides to come help out.  After working all day, the girls decide to take a quick break and Minko takes the opportunity to grab the hose and start a water fight with the other two girls.  From his room, Enishi can see the girls having fun and is reminiscing about college.  He asks Takako – who is in the room working on something – if she remembers the film festival their college had during their freshman year.  At first she doesn’t remember, but then she suddenly does and asks him if he’s talking about the perverted film with the middle school girl in a swimsuit.  Enishi says it was, and that it was his first and only work as a script writer.  He goes on to explain that the club’s president quit halfway through their project and everyone else lost heart after that, so he took over the project and filmed it himself.  Takako feels sorry for him and accidentally calls him by his nickname in college, which thrills Enishi.  He then leaves to get them some tea and Takako asks him about his older sister.  Enishi seems a bit depressed and admits that both he and his mother wanted his sister to take over the inn since no one – including him – thought that he’d be able to run the inn successfully.  With that, he leaves Takako to her work and goes to fetch them some tea.  As he does, we hear the phone in Ohana’s grandmother’s room ringing, but no one answers it. 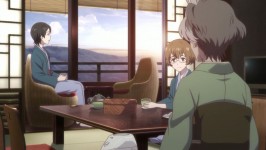 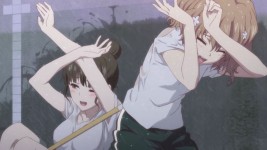 Opinions:  This was a real nice episode that centered around Enishi.  He’s not quite the self-asserted man I thought he was, but rather a shy and somewhat downtrodden man overshadowed by his sister and mother.  We get to see some of his weaknesses and insecurities, which has added another layer to his character.  The idea of a movie advertising for the inn could be a gamble; I’m not really sure how it will turn out but I hope it goes well and can garner some more attention for the inn.  Seeing Ohana and Nako daydream about being spies was adorable and even the fact that Minko started a water fight was endearing.  Though I am a bit worried about that unanswered phone call, since that in itself seems ominous.  Hopefully I’m just paranoid, but I still have a bad feeling about it…