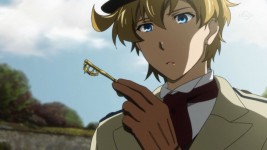 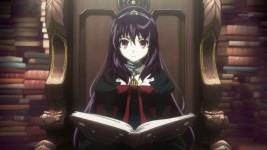 I’ll admit, at first I didn’t even read the synopsis for this show.  I saw that GAINAX was the animation house and called dibs on it a split second later.  When I finally did go back and read the synopsis, I knew I had made a good decision to snag it.  Dantalian no Shoka is the story of a young man named Hugh Anthony Disward – or Huey as he’s commonly called – who is called to his grandfather’s mansion after his untimely death to take care of his library.  There, he meets Dalian, a mysterious young girl who turns out to be a yomihime – or reading princess – who is in charge of containing the Phantom Books.  The episode kicks off with young Huey, who can’t be much older than maybe five or six years old, in a mysterious place with a young woman dressed all in white who is reading a book.  When he asks where they are, she says they’re “nowhere” because the place they’re in doesn’t have a name.  Huey says that it must be inconvenient and the woman tells him that if he must, he can call it by whatever name he desires.  She goes on to say that it was once called the Labyrinth Library and when Huey asks her if there were any other names, she says Bibliotheca Mystica de Dantalian.  Huey then holds out his hand and asks the girl if she ever gets lonely, which surprises her.  She then smiles and takes his hand.

Skipping ahead to present day, Huey is all grown up and an off-duty air force pilot.  He’s traveling to his grandfather’s mansion since he had received his will and his grandfather wished him to take care of his library.  Through Huey’s inner monologue, we find out that his grandfather was a bit eclectic and once spent half of his fortune in order to obtain a rare book.  Because of his obsession with collecting books, most of Huey’s family avoided his grandfather since they were worried some of his rare books may actually bring curses upon those who read them.  Huey doesn’t seem to believe any of it, though he’s hesitant about opening the main door at first.  Reaching for his keys, he pauses and pulls out a golden key that he has strung around his neck to see if that’s the correct key, but he chuckles at his foolishness and puts it away before pulling out the proper key.  Upon entering the mansion, Huey makes his way to the library, but is shocked to find all of his books are missing.  Judging by the amount of dust on the shelves of the bookcases, they’ve been missing for quite awhile.  Huey notices a trail in the dust and follows it to the back of the library and finds a hidden doorway.  Using his lighter as a light, he makes his way down into the basement and finds all of the books in piles surrounding a large, ornate chair.  At first he thinks the girl in the chair is a doll, but then she turns the page of the book she’s reading and startles him.  He finally approaches her and introduces himself as the grandson of the former owner and tells her that he’s looking for a particular book that his grandfather asked him to take care of.

Before the girl can answer him, Huey pulls out a small slip of paper – the letter he had received notifying him of his grandfather’s death – and asks her if she has seen a pet named Dalian.  He then starts to fret that “the poor thing” must be starving and that he’ll have to clean up any messes it made.  As he continues to ramble, you can see the girl becoming more and more irritated.  Finally, she shouts at him and tells him that she’s the Dalian mentioned in the letter. 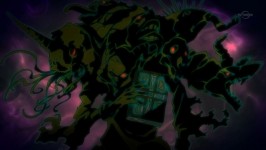 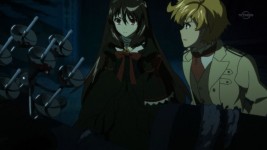 Not long later, Huey and Dalian are in the kitchen and Huey apologizes for what he said earlier as he sets about making tea.  Dalian huffs, saying that she’s not surprised that he didn’t know who she was.  She then starts asking Huey questions about books and as Huey answers her correctly, she seems impressed and compliments him by saying that he truly is Wes’ grandson.  As Huey is gathering the teacups, Dalian suddenly asks him for some sugar.  When he asks her if she takes sugar with her tea, she replies in the negative but states that it’s common to sprinkle sugar on sweet buns before eating.  Confused, Huey turns around to see her fishing said buns out of his coat pocket.  He tells her that those buns were his lunch, but she retorts with the fact that he said Dalian must be starving, so he relents.  The conversation then turns to other things, like Huey’s grandfather’s untimely death, but their conversation is interrupted by a knock at the door.  Huey goes to answer it, Dalian on his heels, and it turns out that his request for an audience with Mr. Conors – his grandfather’s rival – was approved and a carriage has arrived to escort him to the household.  Dalian seems angry about this and demands that she is taken with and Huey allows her to come with.  On the way there, Dalian asks Huey why he requested an audience with his grandfather’s rival and Huey says that since the book he was looking for wasn’t there, it’s only logical to see if the rival had taken it.  This seems to impress Dalian and she temporarily drops the subject.

Upon entering the mansion, something doesn’t seem quite right and Dalian says that it may be too late.  As they venture into the mansion, Dalian explains that the book Conors stole from Wes was actually a Phantom Book, a book that’s not meant to be in the human realm.  She goes on to say that the book’s power waxes and wanes with the moon and considering it’s a full moon out, it’s unlikely that Conors was able to control the book.  Continuing on, Huey and Dalian find that all of the servants are dead and they’re suddenly attacked by what appears to be a joker.  Huey pulls out a gun from his jacket and makes quick work of the joker while still protecting Dalian and the joker turns into dust.  Dalian tells Huey that it’s all part of the book, but Huey doesn’t seem to understand, so they continue towards the study.  One lion attack later, Dalian reveals that the book Conors stole was the original pop-up book that many authors tried to imitate.  When they enter the next room, Huey finds himself face-to-face with a real live dragon.  He tries using his gun, since it worked on the other two attackers, but he finds that none of them works on the dragon.  He manages to shelter Dalian and tells her to run for the study so that she can seal the book while he acts a decoy, but Dalian doesn’t seem to want to leave him.  She then tells Huey that she acknowledges him as her keeper and tells him to read the inscription on the key.  Huey pulls out the golden key and forms a contract with Dalian.  In one of the coolest sequences of animations I’ve seen in awhile, Huey unlocks the lock on Dalian’s heart and thrusts his hand inside and pulls out a book.  Dalian instructs him to read the book and as Huey does so, we see flashbacks from his childhood to joining the air force.  After reading the passage, the dragon is destroyed and they’re able to safely enter the study.  After sealing the book, the duo exits the mansion and Dalian informs Huey that she’s hungry.  Huey chuckles and says that once they get back to the house, he’ll get her some more sweet buns. 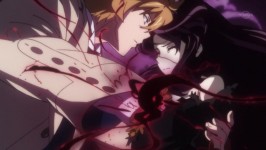 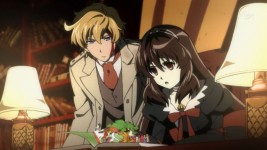 Opinions:  This was such a good episode!  Though it started out a little slow, it’s a captivating plot-line and as a book lover myself, this is right up my alley.  The whole concept is different from anything I’ve seen so far and I’m really digging it.  The animation is stunning and overall, I’m just really in love with this show.  GAINAX has really outdone themselves with this one and I’m really excited to get to see what happens next.