Now let me start off by saying that if there are any guys out there who are watching this show despite the BL tones…I GIVE YOU GUYS A STANDING OVATION!  😀  I saw many guys complaining last week saying: “Oh hell no! Homolust! Screw this shit.” or “The hell!! Eeew, whatever.  I’m out.”  No.6 has proven itself to be a great story with fascinating plot so anybody who was SMART enough to keep on watching, I applaud to you. ^^ Anyway, on to the summary and review!

Four years later into the story, Sion is working as part of the staff in charge of the robots that clean the park.  One day one of the robots issues an alert making Sion and his co-worker head out. Upon arriving, Sion sees that the (old) man is dead. Fast forward we have Sion out drinking coffee with his friend Safu.  She tells Sion that she’s off to study abroad at No.5 and Sion congratulates her.  Safu asks why Sion didn’t go into the advanced course 4 years ago. We are then show flashbacks of what happened in the time between episode 1 and 2.  Sion was stripped of his elite rights after helping Nezumi escape and was forced to go live in Lost Town. However, Sion doesn’t regret his decision of having helped Nezumi back then. After a while, Sion and Safu leave the Café and Sion escorts Safu to the train station.  Before getting there, Safu bombards him with an argument about him not being jealous of her. Once they are about to separate, Safu asks for Sion’s sperm.  Sion is completely taken aback but Safu says that she actually just wants to have sex with him.  Sion politely rejects her and she calls him an idiot. Sion tells her he’ll look for her in two year. Just as Safu turns to leave, a rat passes by and climbs on Sion’s shoulder and says, “you’re as naive as ever”. Sion runs after the rat but loses track of it.

The next day at work Sion and Yamase (his co-worker) begin to talk about the previous day’s incident. Its stated that the old man who died wasn’t actually old, he was only 31 years old.  Sion protests that maybe the government is tampering with data to which Yamase tells him to be quiet, since they have sworn loyalty to No.6.  Yamase then starts feeling sick and starts turning old right before Sion’s eyes and eventually dies in just a matter of seconds.  Sion later finds himself being arrested as suspect of murder.  He’s being taken to a correctional facility and will never be allowed to have a free life again.  Just as Sion has given up, Nezumi shows himself to rescue him. He steals the car and then blows it up. They run around in the forest until they arrive at a truck.  Once on the truck, both of them drive to escape from No.6 and crash into a garbage disposal building. They escape through the sewage pipes and at last are out of No.6 boundaries.  Once there, Sion takes in the desolated scenery.

Having read the first volume before, I already knew most of what would happen in the first few episodes.  While true that they took out a few scenes, the story still manages to deliver suspense.  I don’t really have any complaints and I am extremely glad that they didn’t censor anything.

Hmm, I´m not exactly fond of Safu but I don’t dislike her either. Her pushy/know it all attitude is kind off a turnoff for me but it doesn’t really inspire negative feelings either.  As for Sion, he’s pretty much still as indecisive as ever but he still posesses a kind heart.

And Nezumi, omg Nezumi. I’ve been waiting for youuuu. 8D With those amazing reflexes and that sexy voice, you have me at your feet baby.

My favorite scene? xD  Do you really wanna know? It was obviously the:

“Have you even seen me naked?”

“What would you say if I have?”

The story for No.6 gets even better in the next few episodes so stay in tuned, -coughspeciallyanyfujoshisoutherecough- 😀

On to my screen caps.  Screen caps?! Yes, screen caps! With stupid captions…cuz this review is awesome, quirky and stupid like that. 🙂 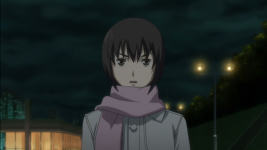 Safu: Give me your sperm. I promise it will be used to save mankind. 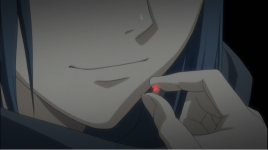 Nezumi: 1…2…3…testing, testing…Can you hear me now? lolol Our OP singer is Lama. Haha, a Lama! 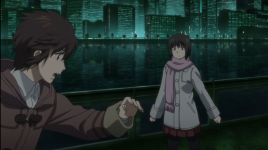 Sion: When school ends everyone starts crying and hugging.  But I’m just like: Adios Betches! 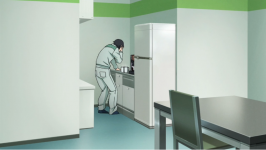 Yamase: Urgh…ugh…those female steroids have been making me dizzy lately. 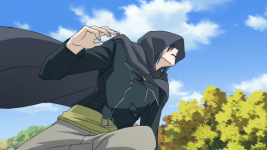 Tuturu! Nezumi The little dark riding hood to the rescue! 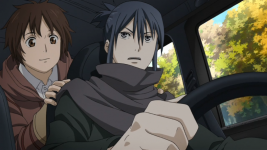 Sion: Omg, this is co cool! We´re stealing a car!

Nezumi: Way cooler than HOTD eh? There were no adults there, but we are mooning the authorities. 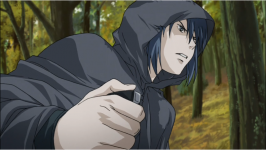 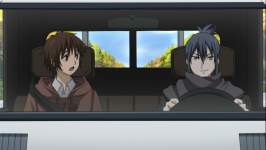 Sion: I need to buy some tampons before leaving No.6.

Nezumi: No worries, I’ve already bought some in advance. 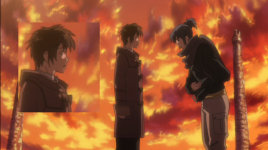 Sion: The hell is this?! My face when I have no face?!

Opinions, comments, advice, nezumi shaped cookies? Feel free to leave em in the box below. I’ll try to answer if I have time.