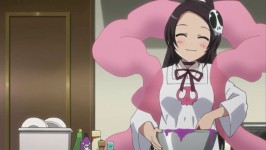 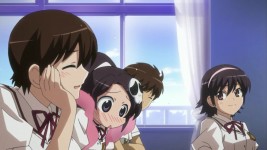 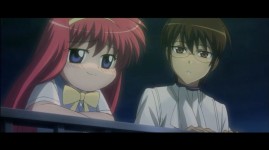 As with last season, the finale is just a small filler episode that gives you a peek into the life of Keima outside of conquering women to get the loose souls hosted inside.  Unfortunately, compared to last season’s episode, it wasn’t as good.  The episode starts off with Keima completing yet another game and then starts digging around in his many bags looking for a new one.  He runs across the game One Leaf, one of the games he found in the bargain bin at that large video game store, and decides to give it a go.  At first he thinks that it will be a crappy game since the quality of games are typically determined by the character design, but once he starts playing it, he’s blown away by how good the game actually is.  As he’s staring at the game in awe, he murmurs that they’ve managed to create the perfect girl.  The next morning, Elcie is busy making breakfast and singing along to one of Kanon’s songs that’s playing on the television when Keima’s mom comes into the room and asks her to go get Keima.  She goes on to say that Keima has been up all night playing games again and she doesn’t understand why he can’t be like a “normal” person.  Elcie ignores the last comment and goes off to call Keima to breakfast.

Peeking into Keima’s room, she tentatively calls him to breakfast and is shocked when Keima peers around his chair at her and smiles.  He genuinely smiles.  While this shocks Elcie, she isn’t really able to say anything because Keima suddenly bolts out the door, PFP in hand and skipping down the street with Elcie chasing after him.  As he walks to school, he’s so engrossed in his game that he actually stops in the middle of the street and doesn’t start walking again until the heroine says “Let’s go!”  Of course, Elcie is completely flabbergasted by the whole ordeal and really isn’t sure what to do.  Once at school, as usual, Keima continues playing his game and actually ends up standing up in class and shouting something gleefully.  After kicking him out, Nikaido turns to Elcie and yells at her to keep a tighter reign on her brother.  Elcie begins to cry and confides in Chihiro and Ayumi that she doesn’t know what’s wrong with Keima and that he’s been acting funny lately.  Ayumi and Chihiro laugh and tell her not to worry too much because Keima has always been weird. 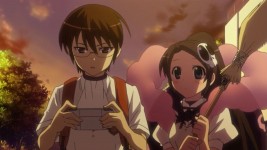 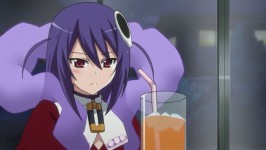 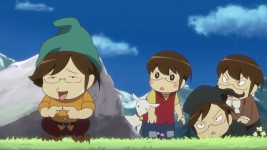 Throughout the day, Elcie spends her time chasing after Keima and the two unknowingly pass by each of the girls that Keima has conquered.  As they’re heading home, Elcie asks him why he’s been so obsessed with that game and he tells her that it’s rare that a gaming company is able to create a game where it balances all ideals of a girl with an intriguing plot as well.  As soon as they get home, Keima locks himself in his room for the rest of the night.  Haqua even shows up and asks to see him, but Elcie explains what Keima’s doing and how he shouldn’t be disturbed and this annoys Haqua.  However, the girls sneak in to Keima’s room to see him sobbing at a scene in the game and they tease him, but he screams at them to get out and the girls scatter.  Just as he’s muttering something, he’s startled by a sudden e-mail, but then he’s irritated that he doesn’t have time for stupid e-mails from fans.  Despite his irritation, he opens it anyway and is surprised to see that it’s from B’s Wares – the company who made One Leaf – and they’re asking him to help them create their next game.

This letter causes Keima to theoretically split into several different personas as he contemplates what sort of game he would want.  However, as his ideals start to clash with one another, we see some scenes of large groups of Keimas (short and fat, tall and skinny, you name it) debating against one another about what sort of game they should have.  Eventually it blows up into an all-out war between the groups that want more than one heroine to choose from and the groups that want only one heroine.  After a long, drawn out battle scene, the two sides realize they really only want the same thing and join forces with one another to bask in the glory of the heroine from One Leaf.  After finally coming to the end of the “battle”, Keima sends B’s Wares an e-mail saying that he simply wants them to make a good game.  At the end of the episode, Keima realizes that he’s finally learned something from that game and that things in reality aren’t always as bad as they might seem to be.  As the credits begin scrolling, Elcie runs up to Keima and informs him that a large grouping of loose souls are headed their way and she’s not sure what to do.  Keima doesn’t seem phased, but instead looks determined to conquer them all.  We then get a look at some random girls throughout the city that I’m assuming will make an appearance in season 3. 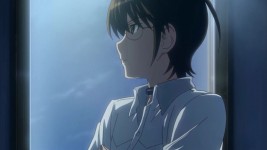 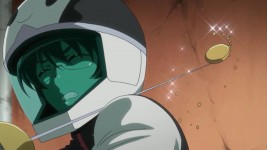 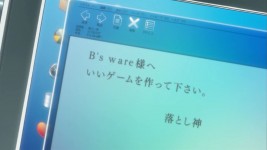 Opinions:  This was…not the greatest way to end a season in my opinion.  It’s great that Keima found the “perfect” heroine in a game and that the company actually asked him to help them develop their new game, but the episode bored me.  The whole Keima vs Keima thing was cliched and while amusing at first, it got really annoying really fast.  While I am happy that it appears the show was OK’d for a third season, I’m less than impressed with the finale for this season.