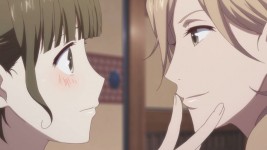 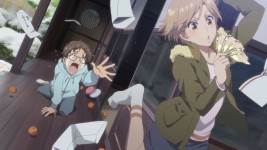 After last week’s lack-luster episode, I was pleased that this week’s episode seemed to get back to it’s roots in terms of what made this such a great show to me.  Last week, after an emotional reunion with both her mother and Ko, Ohana returns to the inn with her mother in tow.  Before their arrival, Ohana’s grandmother calls a quick staff meeting in the front lobby to assign a waitress to her daughter’s room.  Enishi is horrified that his big sister is coming back after all of these years and when his mother assigns Nako as the waitress for her daughter’s room, Tomoe asks her why she doesn’t want to be her waitress since she knows her so well.  Ohana’s grandmother snaps at her and tells her that if she’s to be waiting on her own daughter hand and foot, she’ll end up punching her in the face, which wouldn’t be good for the inn’s reputation.  This seems to put a bit of pressure on the rest of the staff, but Ohana’s grandmother tells them to think of her as just another guest and this seems to settle the staff a little bit.  Outside, they hear a car pull up and Enishi promptly freaks out as everyone else files out of the entrance to greet their guest.  As the car pulls up, Ohana’s mother jumps out the car while Ohana, Minko and Tohru follow suit.  Ohana’s mom is thrilled to see her brother again, though she seems to revert back to the teasing older sister she’s always been and isn’t bothered in the least by her mother’s somewhat stiff and formal greeting.  Nako then timidly asks Ohana’s mom if she can show her to her room, but is shocked when she skips past her and enters the inn herself.  While Nako gets Ohana’s mom settled in her room, Enishi is lamenting about how much he wasn’t looking forward to his sister coming home.  Tomoe asks him about it out of curiosity and according to Enishi, his sister always teased him, took his New Year’s money and generally made his life a living hell.  Tomoe makes a snide comment about how that must be why he likes Takako so much, but this only gives Enishi the idea to call the business woman to the inn to help.

Once settled in her room, Nako is pouring tea while Ohana’s mom sets about complaining about the lack of choice in the yukatas given to guests – she comments that most places will give guests several choices from different colors and patterns – before accepting her tea.  However, that doesn’t seem to stop her complaining.  She complains about the snacks before suggesting that they serve something yuzu flavored since that’s something that naturally grows around the area and would be able to allow guests and staff to start a conversation.  Nako seems to be impressed with the suggestions that Ohana’s mom is giving her for ways to improve the inn and is surprised when she suddenly leans in close.  Ohana’s mom tells Nako that she has really pretty eyes and this causes Nako to stammer and become flushed, but flattered by the comment.  Once she leaves the room, Tomoe pounces on her and asks her how it went and Nako says that Ohana’s mom is wonderful and seems absolutely smitten with her.  This doesn’t really trouble Tomoe much, but the staff then goes about their normal routines.  Outside, Ohana is sweeping the steps and is thinking about Ko and whether or not she made the right decision in saying goodbye to him or if she should have fought for him a little bit more.  Her thoughts are interrupted when her mom shows up and asks her to take a walk with her.  When Ohana initially refuses, her mom scolds her for refusing a customer’s requests.  Without an option, Ohana decides to humor her mother and go on a walk with her.  The two of them end up near the shrine for the bonbori festival and Ohana’s mom comments that the shrine was really the only thing she enjoyed about growing up in the inn.  However, her reminiscing is short lived because she then turns her questions to Ohana and asks her if she managed to meet up with her boyfriend.  Ohana becomes incredibly flustered and denies that Ko was ever her boyfriend, which causes her mom to laugh and say that they made a cute couple.  The conversation doesn’t really make Ohana any happier about her last conversation with Ko and she becomes angry at her mom and storms off, leaving her mom sitting on the steps of the shrine, smoking a cigarette. 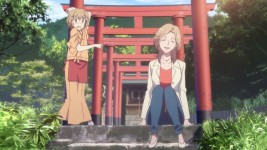 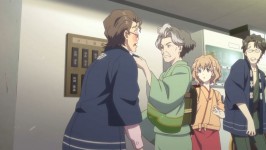 Once she returns from leaving her mom at the shrine, Ohana discovers that everyone is hiding out in the break room, discussing how they’ve “been had” by Ohana’s mom.  As it turns out, she has not only visited the kitchen (leaving them with a tip about utilizing seasonal flavors instead of serving the same thing year-round) but she’s also “introduced” herself to Jiro.  By “introduced”, I mean she basically started stripping in front of him because she wanted to use the bath, but he was in the middle of cleaning the bath.  Of course, she threw in a suggestion, which this time was that they should monitor their guest’s behaviors instead of closing the baths during set times.  According to Ohana’s grandmother, her mom always hated that the baths would be closed during certain times of the days and that her mom wouldn’t ever let her take a bath when she wanted to.  While everyone is discussing the suggestions that Ohana’s mom has been throwing around, Ohana’s grandmother calmly sips her tea.  It’s only when Enishi appears and announces that Takako will be arriving does she seems to snap, as she grabs Enishi by his collar and slaps the bejeezus out of him.  She then glowers at him and tells him to call “that woman” back and tell her that her services aren’t needed and that she should just stay home.  This shocks everyone, but no one says anything about it as she leaves the room to head back to her office.  Later that day, Ohana visits her grandmother and the two of them begin discussing small things that they can do to remind Ohana’s mom that they are family and that they do know the little things that make her happy.  After their conversation, Ohana asks Nako if she can take over caring for the guest in the Wisteria room (her mother) which makes Nako happy to see Ohana back to her normal self.  Meanwhile, Ohana’s grandmother actually visits the kitchen and humbly asks Ren if she could intrude into his kitchen and prepare a meal for the guest in the Wisteria room.  While shocked, Ren agrees to let her use his kitchen.

Later that night, Nako serves Ohana’s mom her dinner and while she initially comments that it’s a bit boring because that’s what they serve all the time, Nako gives her a small plate of what seems to be something ordinary.  But Ohana’s mom seems a bit taken aback by this, since it turns out that it’s her favorite childhood snack that was snuck into her meal, but she seems happy with the small touch.  When getting ready for bed, she notices that someone has included a sheet rolled up into a body pillow of sorts and is touched by the thoughtfulness of both her mother and daughter.  She then calls her mother’s office, where Ohana is visiting and discussing things that they can do to further incline her mom to leave them a good review, and asks for several bottles of beer, sake and soda, as well as a geisha.  Ohana reluctantly informs her that because of the late hour, she doesn’t think that she can get a geisha, so her mom says that a young waitress and an old woman will work nicely before hanging up.  As weird as it is, I think Ohana’s mom was just using that as an excuse to get her family to spend some time with her.  So, Ohana and her grandmother arrive and Ohana’s mom decides to treat them to the alcohol (though Ohana only has soda).  Ohana somehow becomes drunk off of soda and begins blubbering about how if she had acted on her feelings for Ko earlier, she may have been able to become his girlfriend.  When her mom starts teasing her about it, she becomes angry, though she also soon passes out on the table.  Eventually, Ohana’s grandma falls asleep as well and Ohana’s mom finds Enishi sneaking around and asks him to carry their mom back to her room for the night; Enishi begrudgingly agrees to do so.

The following morning, Ohana’s mom gets ready to leave and right before leaving, she hands Ohana a small envelope and tells her that if she ever wants to come back to Tokyo, to give her a call and she’ll come get her.  Once she says her final goodbyes and leaves, Ohana opens the letter (after much exclamation from everyone else) and everyone is thrilled, yet shocked, to find that Ohana’s mom actually left them a good review.  Afterwards, Ohana’s grandma tells them to get back to work since they’re expecting another customer soon, so everyone scatters to get the rooms ready.  Later, Ohana heads up to the shrine where she and her mother talked again and she realizes that she loves her life at the inn more than she loved her life in Tokyo – even more than she loves Ko.  So after a painful realization, she officially says goodbye to both her life in Tokyo and Ko. 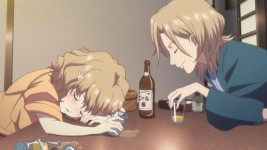 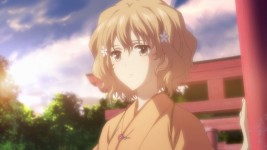 Opinions: This was a great episode to kick-start Ohana’s new life back at the inn.  She’s not only proven to her mother that the inn isn’t as bad as it was when she used to live there, but she’s also become aware of her feelings for Ko.  While it was sad that she finally said goodbye to Ko – and in a sense, let him go – but at the same time, it’s probably good that she did.  It will allow both herself and Ko to move on instead of keeping them tied to one another when something may or may not happen between them.  It was a bit of a bittersweet episode, with Ohana’s mom finally returning to her childhood home, but it was incredibly touching to see that her mother was willing to go that extra step and make her feel at home.  Overall, it was a great episode and I’m looking forward to the next one.