The World God Only Knows II 11 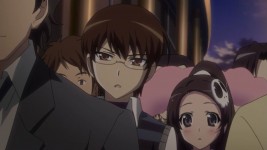 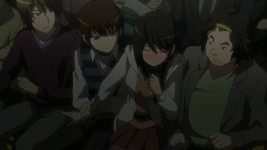 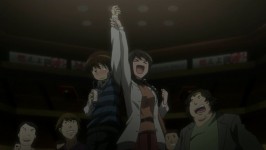 With the season finale right around the corner, I was a little concerned as to how Keima would be able to conquer Jun before the end of the season or even before Jun’s student-teacher stint is over.  However, considering Keima had uncovered the truth behind Jun and her basketball team, I wasn’t too worried that he’s fail.  The episode starts off with Jun sitting in her room, thinking about what the kids in the class said and looking downright depressed.  Tearing herself from her depressing thoughts, she looks at the clock and exclaims that she’s late and grabs her ticket to a wrestling match and dashes out the door.  While waiting in line at the event, Jun continues to think about what happened at school but then remembers that she’s supposed to be making a difference in their lives.  This seems to cheer her up a bit as she throws her fist into the air and cheers.  However, she doesn’t seem to notice Keima and Elcie standing a bit behind her, which I suppose is all part of Keima’s plan.  He murmurs to Elcie and tells her to go see what seat Jun is sitting in and Elcie scurries off (Keima mutters something about her being an idiot for not using her reinmant to conceal herself) and ends up making an exact replica of Jun’s ticket.  A little while later, Jun finally makes her way into the stadium and is looking for her seat, but is surprised – and possibly a bit angry – that someone is already sitting in her seat.  What she wasn’t expecting was to see Keima sitting in her seat.  At first she’s in denial about it, but Keima simply shows her his ticket – which Jun can’t tell is a fake – and becomes dejected that it was a double-booking.  She then tells Keima that he can have the seat and is about to go look for another seat when Keima grabs her arm and pulls her onto the seat with him.  This shocks Jun, but Keima simply tells her that they’ll have to share the seat since there aren’t any seats left.

For the next ten to fifteen minutes of the episode, we don’t see a whole lot aside from Keima staring blankly at the wrestling match while Jun gets pumped and often screams at the athletes with the crowd.  She even ends up dragging Keima into a few of her shenanigans by pulling him to her feet and putting him into a headlock when the wrestlers put each other in one.  In a way, I feel sorry for Keima, but he seems to be taking everything in stride.  Towards the end of the match, Keima comments on how pro wrestling is actually pretty interesting since the crowd reacts to what the athletes do and in return, the athletes respond to the crowd’s cheering.  Jun says that that’s because everyone is as one when it comes to that sort of thing; cheering each other one and reacting to someone’s encouragement.  Keima’s eyes narrow a bit and he then asks her if that’s what happened when she was the captain of the basketball team.  This catches Jun off guard and her momentary silence allows Keima to continue, asking her if the team quit because she was trying to push her ideals onto them.  As Keima continues talking, Jun becomes more and more upset about what he’s saying until she jumps up from her seat and shouts at him, saying that he doesn’t know anything, and runs off, leaving several people in the crowd stunned.  Keima doesn’t go after her, but I suppose that’s all part of his plan. 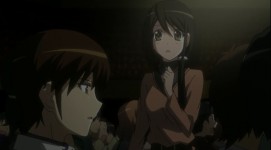 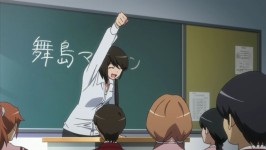 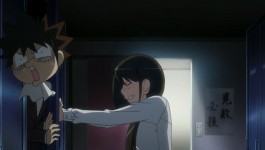 The following day at school, the classroom is buzzing about how much Jun is annoying them by trying to push her ideals onto them.  However, their griping is cut short when Jun enters the classroom and informs them that she’s signed all of them up for the school-wide marathon the following week.  She cheers at them, asking them to all do their best amidst the groans and complaints from students.  One student actually stands up and asks her to just stop being so passionate because it’s getting annoying.  This causes another student to pipe up and agree with them, and then another and another.  This upsets Jun so much that she shouts at them, calling them all idiots and then running out of the room.  After she leaves, the students who told her to stop murmured amongst themselves saying that they felt bad for making her upset, but at the same time, they’re happy they were able to show her how the real world is before she officially became a teacher.  Keima then stands up and says something about how he’s not surprised that Jun wasn’t able to inspire stupid people like themselves to do anything meaningful and then he leaves right before they’re able to do anything to him.  Keima then finds Jun in the locker room of the old basketball team; okay, it’s more like he popped out of the locker and scared the every loving shit out of Jun, but still.

Keima says something about the basketball team and Jun runs off again, heading towards the gym and Keima follows her.  Jun starts sobbing as she remembers her teammates running off on her, saying that they can’t put up with her pushing her ideals on them anymore.  Keima grabs her and get uncomfortably close to her and says that she shouldn’t listen to them too much because the real world needs some ideals in order for people to be able to survive the daily struggles of living in the real world.  He says some other sappy stuff (to be honest, I wasn’t really paying much attention to what he was saying because he was boring me) but it seems to get through to Jun and she appears to be a little bit more at peace with things.  Then the entire classroom appears and apologizes to Jun for their behavior and Jun is overwhelmed with happiness, though she’s confused as to where Keima has disappeared to.  As it turns out, it was all part of Keima’s plan; Jun runs off, Keima insults his classmates to “reset” their opinions of her and then had Elcie lead everyone to the gym to apologize after counting to 500.  A few days later, Jun’s stint as a student teacher is over, but Elcie mentally comments on the fact that Keima hasn’t attended school since he confronted Jun and she’s worried about the loose soul that’s still inside of her.  As Jun is leaving the school, she passes by Keima, who is leaning against a tree playing his PFP, and thanks him for everything that he has done for her.  Keima says it’s nothing and tells her that he expects to see her teaching at the school officially soon.  Jun laughs a bit and then backtracks, telling Keima that this is the last time she can allow him to see her as anything other than a teacher.  Then she surprises him (or knowing Keima, he knew it would happen) by kissing him and releasing the soul from within her.  Elcie, who is standing on a balcony at school, is shocked and panicked when she sees the soul go flying past. 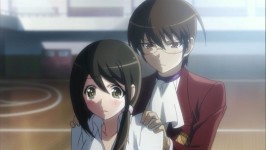 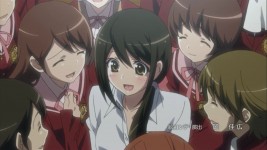 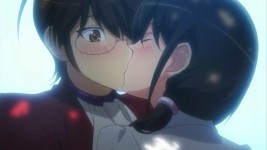 Opinions: TL;DR – THIS. EPISODE. BORED. ME. TO. TEARS.  For serious.  The whole wrestling match wasn’t really needed in my opinion, though I suppose it was a good way for Keima to wriggle his way into Jun’s heart, but still.  Overall I found it extremely boring and lackluster in how Keima was able to conquer her.  I was a bit nervous when he confronted Jun at school, but only because I thought he’d kiss her and potentially get in trouble, but alas, it wasn’t going to happen.  Considering that the season finale is next week, I wasn’t thoroughly impressed with this episode, but it was a decent episode none the less.  I’m really hoping that the finale is a better episode than this one.