We’re ten episodes into the series, some may even say we’re nearing the end. From what I’ve seen of this 10th episode though, all I can say is “what a darn tease!”. This episode continues to develop everything at a snail’s pace, and give some further hints onto what may be going on, but at the same time it refuses to let anything concrete or game changing happen, despite all indication that the two events that do take place in this would provide some manner of impact.  Its not a bad episode per say, I think its well established at this point that the series is hardly capable of being BAD. Its not a very satisfying episode though, and borders on frustrating.

Before I start picking at the things that kinda annoyed me, I’ll note the strengths of this episode. If anything, the whole episode was rather awesome in its rather strong feeling of “finality” that seemed to prevail all the way till the end. You definitely felt like something big was going down. I was on the edge of my seat till the end, assuming that this was indeed the last time we’d see Menma, and perhaps the remaining two or three episodes would deal with the aftermath of Menma’s return. I expected it, and yet Ano Hi Mita Hana no Namae Bokutachi Mada Shiranai refused to give me anything, and it felt like it dangeled the ending infront of me, only to pull it away at the last second and go: “Not yet baby… Not yet.”

That was perhaps most frustrating. Beyond the actual answer of how it was Menma died, Every major issue was dealt with. We had a re-enactment of the final day of Menma’s life, complete with Jintan actually revealing his true feelings. We had Tsuruko openly admit that she loved Yukiatsu, and we had Anjou console and make up with her. We had Yukiatsu actually try his best to forget Menma and have her move out of his life. Everything seemed perfect. Of course, it seemed perfect for everyone BUT Jintan. Jintan didn’t want Menma to leave, going as far as to ask her to stay with him forever. 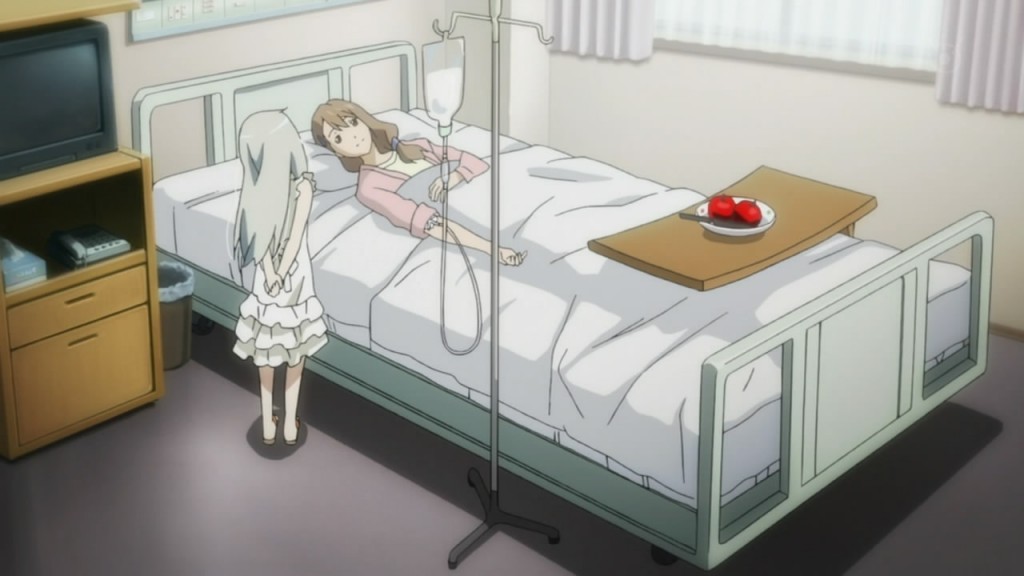 We did get some hints on Menma’s death. I think it had something to do with what Jintan’s mom told her. and obviously we’ll find out what that “one thing” was that she wanted to have before she could reincaranate. Hopefully it wasn’t Menma’s very death, as that would be borderline evil. Either way, it’ll be something related to the meeting between Menma and Jintan’s mother.

I have to admit, I felt bad for Anjou, and more than a bit disgusted at Jintan. The girl is dead boy… let her LEAVE. I suspect, based on my earlier theory, that it is indeed Jintan who has somehow caused Menma to become a ghost. I don’t think she’ll leave until HE himself wants her to. Given that that may never happen, we’re still caught in an endless loop of Menma’s business being unresolved, and everyone being constantly tortured by her existence at the moment.

Jintan continues to drag in her family even. who actually did stand to benefit from it. I guess even Anjou had good comments on how Menma’s return ended bringing everyone back together, and that if she did leave, at this point, things would regress. Of course, I honestly don’t see the point of Menma still being here and it is more than a little frustrating to just see the characters continue to stumble around, hoping to find some sort of solution. I’m wondering if there even is a solution, or if it simply hinges on Jintan eventually not being able to see Menma at all?

In short, I liked the character moments, I liked that everyone except Jintan was starting to become more honest with themselves, and honestly… I liked the idea of Menma finally going away. I’m curious to see where this goes, but at this point, my patience is starting to wear a bit thin. ON WITH IT ALREADY! >_>

Much like last time, I have no guesses on what’s going to happen next week. So yeah. see you next week! XD