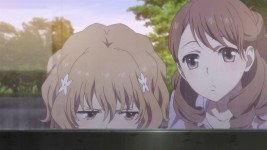 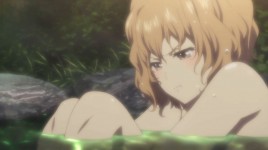 This week, Ohana decides to “fest it up” by taking a solo trip to Tokyo to fight against the review that the inn gets in a travel magazine.  It starts off with the girls finding that the travel magazine that was published, rating all of the hotels in the area.  At first, she was thrilled that they got five stars until Minko points out that they actually got five stars out of a possible ten.  This both shocks and irritates Ohana and once the girls arrive at the inn, they gather the rest of the staff – including Ohana’s grandmother – to discuss the score they got.  Ohana is furious at the reviewer since they all tried their hardest and they seemed to really enjoy themselves, but her grandmother simply tells everyone that there isn’t anything they can do other than to improve their service and move on.  Ohana tries to tell her that they should really call the editor and complain, but her grandmother waves off her concerns.  At that moment, the phone begins ringing and Tomoe answers.  She regretfully informs Ohana’s grandmother that a customer who had a reservation called to cancel and Nako – who picked up another phone that was ringing – informs her of the same thing.  Enishi panics and runs out of the room crying, saying that he needs to get Takako there as soon as possible.

Later that day, Ohana learns that her grandmother has gone into town to meet up with the other inn owners in the area and discuss the reviews everyone had gotten in the magazine.  Ohana follows her and eavesdrops on the conversation where she finds out that not only did the Kissuiso get a bad review, everyone got a bad review while a modern spa opening up the next town over has been getting rave reviews.  Everyone seems nonchalant about the whole ordeal (some of them even say they might like to visit this new spa) except for Yuina’s grandmother.  She’s furious – much like Ohana is – and demands that they try to do something about the situation.  Ohana’s grandmother gives her the same speech that she gave the staff at her own inn about trying to put it behind them and learn from it, but Yuina’s grandmother does’t seem to be buying it.  Meanwhile, Yuina – who is cleaning the lanterns to get ready for the bonbori festival – sneaks up on Ohana and surprises her.  Ohana, who somehow got wrangled into helping Yuina, asks her if she’s angry about the reviews, but Yuina says she’s not angry at all.  She idly remarks that she’d like to go to that new spa that opened up and see what it’s like, but this irritates Ohana and she storms off, leaving Yuina confused.  Awhile later, Nako is looking for Ohana but Tomoe tells her that she found a note.  Apparently Ohana has taken a bit of vacation and gone off to Tokyo to confront the editor of the magazine, much to the shock of the staff.  Nako tries calling Ohana (likely to try and talk her out of it) but Ohana – who is already on the train to Tokyo – ignores the phone call and tries to focus on what she needs to do. 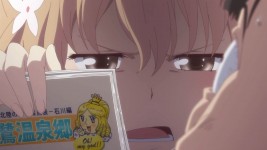 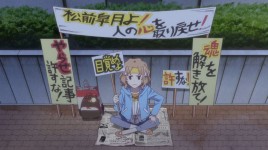 Once in Tokyo, Ohana sets out for the publishing company who published the magazine and is able to secure a meeting with the editor…if you can really call it a meeting.  Ohana basically demands to know who wrote the article and that they recall the magazine, but the editor – who is terrified – tells Ohana that the article was written by a freelance writer and that it’s out of his hands.  This only infuriates Ohana further and she snaps at him, demanding that he tell her who wrote the article.  He finally gives in and hands her the business card of the author and this seems to cheer up Ohana…for about 2.5 seconds until she sees the name written on the card.  Fast forward a few hours, and we see Ohana meeting up with her mother for the first time in nearly six months.  Her mom takes her out to lunch and informs her that she broke up with her boyfriend (the one she ran away with) because things weren’t working out, but she doesn’t regret running away because she’s always wanted to do a moonlight flit.  Ignoring her mother’s rambling, Ohana presses the subject of the articles written about the inn.  As it turns out, her mother is the one who wrote the articles and scored the inns so poorly; not because she wanted to, but because someone told her to score them poorly.  This does nothing to comfort Ohana and she asks her mom to stop by the inn sometime and stay for a weekend to see how things really are.  When her mom says no, something snaps inside Ohana and she starts ranting about everything she’s pent up over the years; from the fact that her mother basically up and left her for a moonlight flit to a Christmas present that she got in 5th grade that she didn’t want.  Her mother is surprised she remembers that far back and tries to change the subject, but this only irritates Ohana and causes her to storm out of the restaurant.  Ohana ends up going to a WcDonald’s and starts making signs – though we don’t know what they’re for.

However, we soon find out that Ohana has stationed herself outside of her mother’s office with signs declaring that her mom should return home to her roots.  This amuses both passerby and her mother, but Ohana makes no movement to leave.  She does, however, text Ko to see if he’s busy since she never told him that she was going to be in the city.  After a few text messages, she finds out that he’s working at the big bookstore downtown and Ohana decides to go visit him.  She sees him, but he’s being scolded by  his manager for “flirting” with the girl we saw before.  She panics and in her rush to leave, she knocks over a large display of books which only succeeds in getting Ko’s attention.  The girl Ko was talking to earlier grabs Ko’s sleeve and timidly asks who “that girl” is, but Ko ignores her and asks Ohana what she’s doing there.  Ohana panics and runs out of the store, leaving Ko confused.  She returns to her spot outside her mother’s office as it begins to rain and her mom brings her snacks, but Ohana mutters that she won’t accept anything from the enemy.  As she begins to cry, Ko calls out to her from across the street, startling her.  The two pack up her things and Ko takes her to a nearby cafe and they order coffee (well, Ko does.  Ohana gets a soda).  At first, the air is tense between them, but when Ohana comes back from getting seconds of Coca-Cola mixed with ice tea does the tension finally break.  Ko teases her about her beverage choice and is surprised that she still drinks it like that.  They easily fall into a conversation and Ohana asks who the girl at the book store was.  Ko tells her that they’re co-workers, but he later reveals that the girl has confessed to him even though her feelings are unrequited.  Ohana is about to scold him for not giving the poor girl a proper answer, but then remembers that she never answered Ko’s confession either and an uneasy silence settles between them.  Ohana suddenly gets up and says that she’ll pay the bill, but Ko snatches the bill from her and pays for the both of them.  Watching him from afar, Ohana is suddenly emotional and runs out of the building, Ko on her heels.  However, before they can say proper good-byes, Ohana dashes across the street like she always did after school and calls out to him, telling him that she’ll see him later.  She then walks aimlessly in the rain, but loses her signs when her bag becomes soaked and rips.  As she’s staring at her lost work, a car pulls up and asks her if she needs a ride; this scares her and she runs away.  However, someone jumps out of a car and calls out to her, startling her to the point where she slips and runs head-first into a light pole.  Minko and Tohru jump out of the van the inn uses to pick up groceries and such, surprising Ohana.  Minko asks her if she’s alright and Ohana bursts into tears and clings to Minko.  Minko isn’t sure what to do, but manages to ask Ohana why she’s crying; Ohana says she doesn’t know, but continues sobbing. 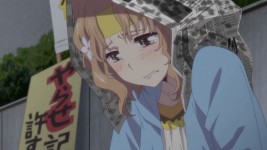 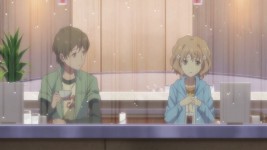 Opinions: This was a great episode and it was kind of nice seeing Ohana this fired up about something.  It really shows that over the last six months at the inn, she’s really learned to take pride in her work and will do anything for the inn.  That being said, it was also an incredibly sad episode partially because it was her own mother who wrote those scathing reviews for the inns, but also because of what happened between Ohana and Ko.  I can understand Ko wanting to move on, especially since Ohana hasn’t returned his feelings yet, but at the same time I don’t want him to.  So in my anger at the whole situation, I like to think of the girl at the bookstore as a home-wrecker even though I know she’s not.  XD  I am definitely interested to see how things will turn out between Ohana and Ko – and whether or not he’ll move on – and between Ohana and her mother.