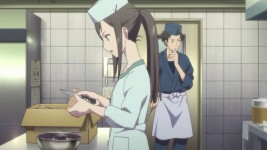 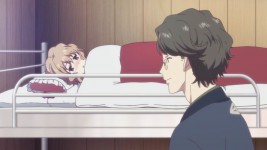 After last week’s emotional-whirlwind of events, I wasn’t sure if they would be able to top it.  I’m happy to say I was oh-so-very wrong with my assumptions.  This week wasn’t a whirlwind per se, but was definitely emotional as we get a peek at how much Ohana cares about the inn as well as how much the staff cares about her.  The episode starts off with Minko waking up and finding that Ohana has already woken up and gone to work, which is a feat in itself since Minko tends to wake up fairly early as it is.  As it turns out, Ohana is chasing something out of the inn (a bat most likely), but she becomes light-headed and sits down for a moment before collapsing.  Thankfully, Beanman is heading to the baths and spots her and brings her back to her bedroom.  Of course, everyone is crowded in Ohana’s room, trying to make sure she’s alright as her grandmother sees the doctor off.  According to the doctor, Ohana has overworked herself and has a slight fever, but it should go away so long as she rests.  And so, the staff begins to get ready for a day where they’re short one staff person and Minko heads to the kitchen.  As soon as she enters, Tohru pounces on her for information as to whether Ohana is alright or not.  Minko stiffly reports what the doctor has told them and Tohru begins to ponder whether he should make Ohana some rice porridge to make her feel better.  Obviously, Minko is a bit irritated with Tohru’s obsession with Ohana and I don’t blame her one bit.  It’s pretty obvious that he likes Ohana.

Later in the day, Ohana is woken up by the tv that Nako had turned on, but quickly falls back asleep.  She wakes with a start early the next morning and seems to feel better since she gets out of bed and sets about cleaning the entire entryway, including the staircase and the front desk.  She manages to get all of her tasks done and even bumps into Nako as they’re bringing the guests their breakfasts.  Nako is happy that Ohana looks like she’s feeling better, but the fact that Ohana is flushed doesn’t get past her either.  Later, as Tohru is educating Minko in how to broil fish, Nako rushes into the kitchen and exclaims that Ohana has collapsed once again.  As a result, everyone is worried about Ohana and put her back to bed where she promptly falls back asleep.  Later in the afternoon, Ohana wakes up and manages to climb down the ladder of her bunk bed to turn on the tv, but tries to stand back up and isn’t able to move.  Thankfully, Tohru comes into the room that moment with some food for her.  He serves it to her and warns her that the rice is still really hot, but he becomes flustered watching her try to cool off the porridge by blowing on it.  Ohana then notices the strawberries on her plate and it turns out that Minko wanted Tohru to include those, so it’s obvious that Minko is worried about Ohana too.  Tohru becomes flustered when she stares at him without saying anything and he decides to see if her fever has gone down at all by touching her forehead to his.  Unfortunately for him, this backfires and he leaves the room more flustered than before. 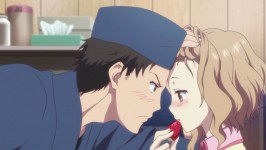 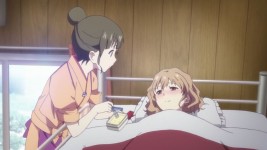 After managing to get some more sleep, Ohana wakes up and attempts to get back to work, but is stopped by Nako.  Nako scolds her and sends her back to bed before giving her some sort of cool treat to help her fever cool down.  Ohana laughs and says that Nako reminds her of an older sister; Nako blinks and tells Ohana that she is an older sister.  Ohana tries to get back up to help Nako and Tomoe, but Nako pushes her back down and tells her that they’re managing just fine because she and Tomoe were the only two waitresses before Ohana showed up.  Leaving, Nako tells Ohana to rest, but doesn’t notice how upset this seems to make Ohana.  After Nako leaves, Jiro arrives and asks her if she would mind if he read her some of his manuscript and got her opinion on it.  Ohana isn’t sure if this is his way of giving her a “get-well” visit or not, but she doesn’t say much as he begins reading to her.  Later, he leaves and Ohana falls back asleep before waking up about half an hour later.  She ends up trying – once again – to get back out of bed, but her grandmother shows up and shoos her back to bed.  Ohana complains that she’s lost track of how many times she’s been told to go back to bed and her grandmother tells her that she should take the hint and rest up.  Ohana manages to fall back asleep and has a strange dream where she’s at the shrine for the local Goddess and Ko shows up, asking if she plans on coming home to Tokyo.  Ohana says she doesn’t know if she wants to or not because she loves everyone at the inn, but misses spending time with him as well.  In the background, I noticed a small girl with a fox crouching beside a statue, though I’m not sure who she is.

Ohana wakes up from her dream and starts sending Ko a text message about her dream and how she doesn’t think she’s really needed at the inn.  However, she ends up falling back asleep before being able to send it.  Later, Minko shows up and is about to draw on Ohana’s face when she decides not to and Ohana wakes up, startling her.  Minko tells Ohana to go back to sleep because they don’t need her help that day, which makes Ohana start to cry.  Nako then comes into the room and sees that Ohana was texting someone and scolds her for playing with her phone when she should be resting, but pauses when she sees Ohana’s un-sent text message.  She then notices Ohana is crying and tries to calm Ohana down by telling her that they really do need her help around the inn.  She goes on to say that she had a customer tell her that they were worried when Ohana didn’t bring them their lunch and how worried everyone else is about her.  Of course, Ohana falls back asleep during Nako’s speech and Minko laughs at that.  Outside of the room, Tomoe is watching the girls and smiles at the fact that they care so much about Ohana before noticing that Ohana’s grandmother was coming to check up on Ohana again.  However, both Enishi and Jiro were headed down the hallway as well, but are quickly chased away by Tomoe and Ohana’s grandmother.  We then see that Ohana has the same dream as before again, except this time she says that she can’t leave the inn because everyone needs her help and she loves them all like a family.  Ko then says something before fading away and Ohana begins crying in her dream. 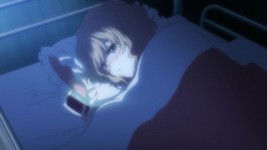 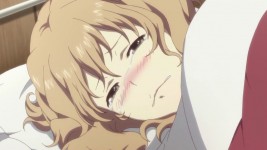 Opinions: This was by far one of the more emotional and gut-wrenching episodes of the season.  Seeing Ohana sick was sad in a sense, but seeing how much everyone cared about her and tried to help her feel better was really touching.  Especially the fact that her grandmother showed that she cared about Ohana’s well-being (even if it was a little bit).  I’m really starting to notice that Tohru may be developing a thing for Ohana, though I’m not sure how I feel about that.  Sure, he’s hot and he and Ohana make a cute couple, but what about Minko and Ko?  Minko has obviously picked up on the fact that Tohru is starting to think more about Ohana, but it’s still hard to tell if his initial reaction to finding out she was sick was just innocent worry or something else.  Seeing Ohana cry because she didn’t think she had a spot at the inn made me tear up because it was just an incredibly touching moment to see Ohana so unsure of herself.  However, her dream has me a bit sad.  I’m thinking that it means she’s officially saying “good-bye” to Ko and her life in Tokyo, though I’m not sure.  Hopefully not, but I suppose we’ll find out soon.