This episode was perhaps the most emotionally charged and perhaps the most depressing episode the series has presented to us. It may be a bit dark and sad, and at times even frustrating, but the picture that this episode and the series paints is nonetheless very beautiful. Its uncertain which path the series is planning to take, but whatever the end result is, one can say that that the way the series deals with the issue of loss, love and determination is very impressive.

This episode opened up everyone heading to talk to Menma’s mom. Now I was actually expecting a huge confrontation between Jintan and Menma’s dad, but we ended up seeing something much more unexpected and much more powerful. In a strange twist , Menma’s mom is actually pretty broken from her daughter’s death instead of the comforting, rooting mother that we were lead to believe she was. I think if anything, the darker, frustrated and hating mother that we run into this episode is much more realistic than the caring and strong willed mother that we saw an episode ago. It makes a lot of sense that seeing the entire gang together, would tear Menma’s mother to shreds. 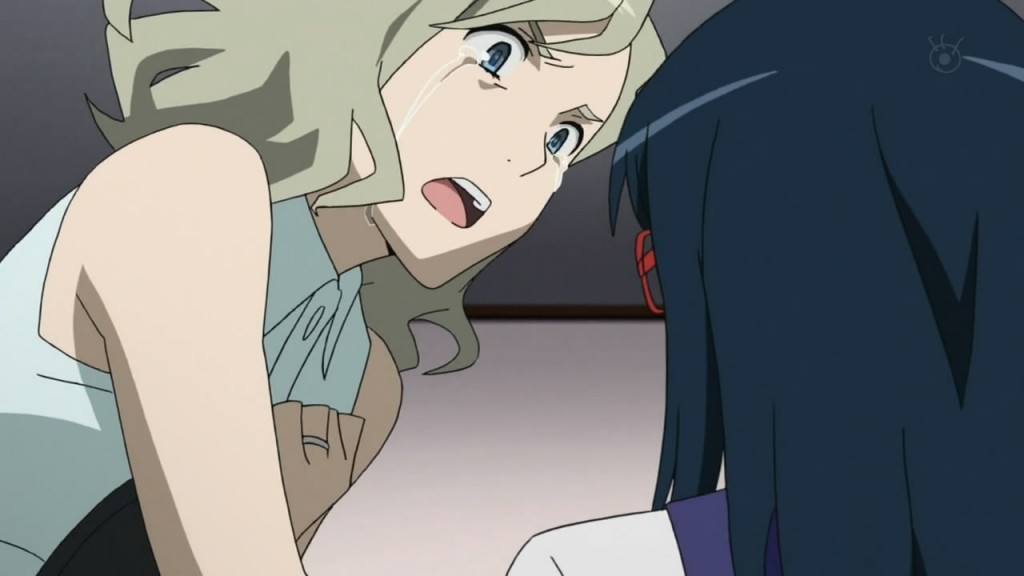 In retrospect, no matter what the reason, putting Menma’s mother through this whole ordeal was highly irresponsible and selfish of Jintan and the rest. Even if it is to help Menma eventually find peace, her mother is hardly aware or able to comprehend such a fact. It makes a lot more sense, therefore, that she would be angry at everyone. The more unexpected revelation though, was that said Mother actually hated all the other children that her daughter was friends with, obviously jealous at how they were able to grow up, move on and live while her daughter didn’t. Its not fair to judge the character as evil, or bad, but I’d say that this reaction is incredibly realistic and very human.

I guess what really caught me off guard, was this sudden dose of realism and despair that totally contradicted the mood set by the previous episode. Its not a bad thing, per say, but it does make me feel like this is a really Bi-Polar series. At one point, we see everything getting all better, with Anjou and Jintan getting along, Jintan actually forcing himself out of his hikikomori ways and all that awesome  stuff. Then we see nearly everything falling apart horribly in this episode.

The group loses its unified sense of purpose, as everyone again, begins to question why they’re doing what they are. And of course, given that none of them can really see Menma, they wonder what the hell they’re doing. Most of them decide to give up on this false hope of Menma actually being there. Things only serve to get worse from there. Now I don’t know if this episode was made to represent a sort of “hurdle” along the path to a better tomorrow, or if it was giving the viewers and everyone else a good dose of reality.

Again my fears of the whole Anjou x Jintan coupling not happening are brought to light: 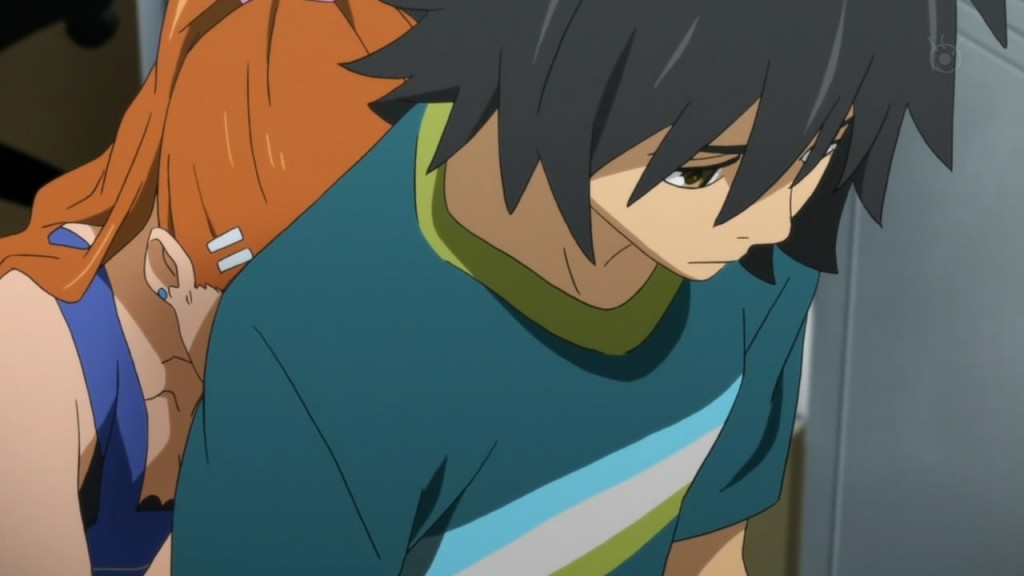 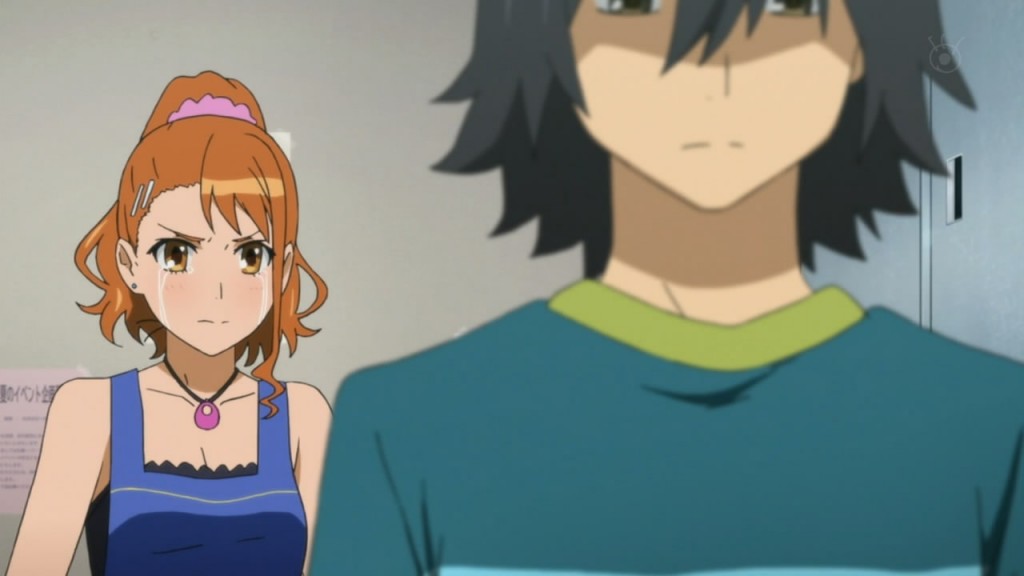 Doesn’t seem like this coupling is working… *Jintan leaves*

In yet another very powerful scene, Anjou confesses that she loves Jintan, and that she’s guilty over being happy at Jintan actually saying he didn’t like Menma. She’s also equally pained by the fact that Jinan left and therefore proved that he did in fact like Menma. Now it was this very scene, that makes me think that Anjou and Jintan are hardly going to be together. If anything, once the dust settles and everything is resolved, Anjou will simply move on with her life and possibly look forward to a new love. It really does seem like my earlier theory about Anjou needing to graduate from loving Jintan is seeming more and more likely.

I’m unsure about what tone the series has chosen for itself, but it seems to be leaning towards the “sad” or “unfortuante” but realistic slice of life anime, more along the lines of Honey and Clover. I feel like its seeming like this series is less and less about the growth of its teenage characters and them overcoming their hurdles and pain of losing a dear friend, and more about the actual concept of death and what it does to people. 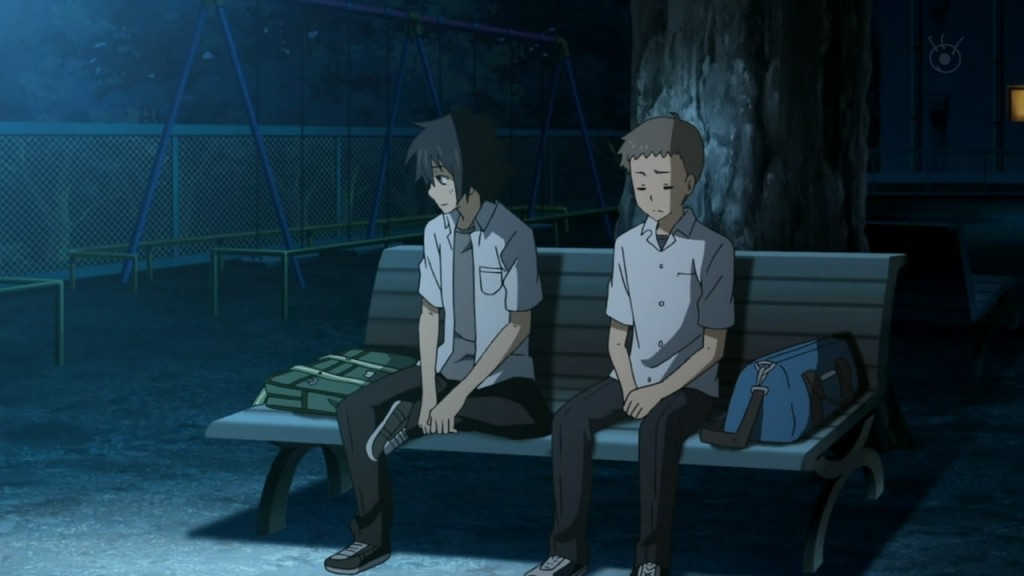 So like… is it okay for two guys to be alone at night on a bench? O_o

And if that wasn’t enough, this was hardly the last epic conversation. We got another conversation between Jintan and Menma’s little brother, who laments the fact that his parents seem to forget that they still have a child. I think this really echoes the idea that this series is more ABOUT death and its implications, than it is about happy endings and love. I think the fact that this entire episode focused to make Jintan, its main character realize what pain parents go through for their children, is another facet of how this series seems to be more about a wider meaning than anything.

At this point, you’re probably reading this and thinking: “WTF? MAKE UP YOUR MIND AND STOP SPECULATING!”. Now, to this, my first and foremost answer would be: “it’s more fun to speculate”. And it is, but lets forget that for a second and look at what stage we’re at. Its much easier to analyze and understand a series once its done, rather than be able to understand what the series is trying to tell you before it’s done giving its message.

I personally, really want a happy ending for the characters. These characters are deep, likable and above all very human and realistic. Its easy to relate to them, and that’s why its equally frustrating when it seems like they need to have to deal with the harshness of reality, rather than get a happy ending. Its not any less powerful or beautiful, but its also not very satisfying to me personally.

Its for this reason that while I appreciate and admire anime like 5cm/second, I really wish for happier endings. 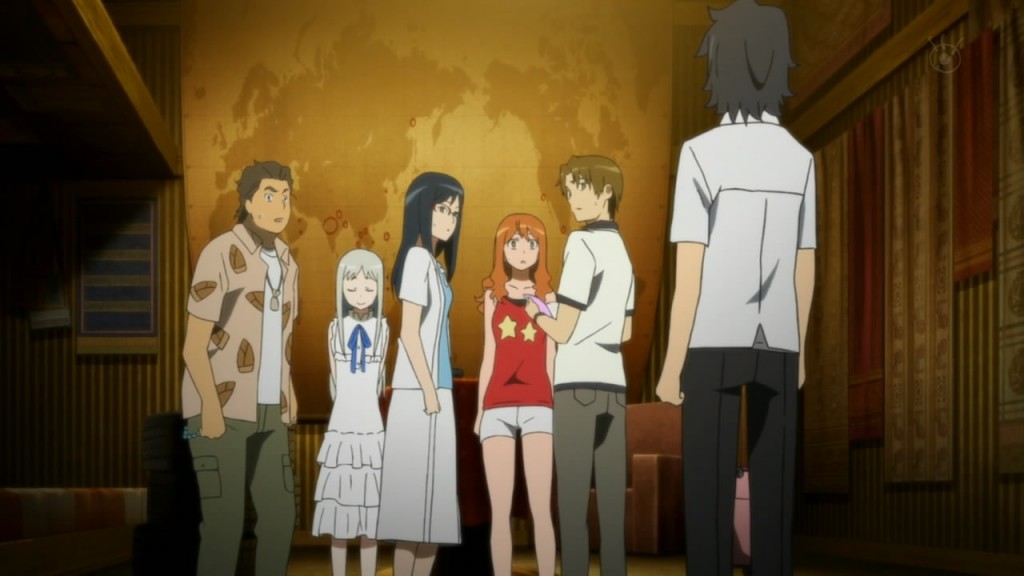 Everyone: Jintan… Menma just totally owned us right there didn’t she? O_O

And while the skeptic in me is saying this series isn’t going to be as happy and nice as we’d like to hope, I do think there is still hope. Menma does get everyone together and fix a rather explosive and sad situation. I do believe that it was about time she did this, and gave everyone a clear sign that she exists. With this, everyone, including Jintan, can stop wondering if she’s making this all up. And hopefully we can move to a better, more happier tomorrow for everyone. Or we could just end up going down that realistic sad path I mentioned earlier XD

Either way, this episode definitely ranks up there as one of the stronger episodes this series has given, and I’m eager to see what happens next!

Next will probably have us see Tsuruko’s guilt in the whole Menma affair on that fateful day.