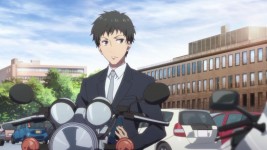 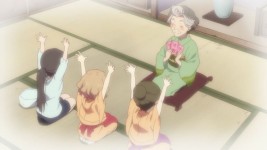 This week, Ohana kicks it into high gear to help save the inn when her grandmother is out of commission.  The episode starts off fairly normally; Ohana is dropping off the weekly news letter at the rival inn and bumps into Yuina who grabs the letter and takes it to her grandmother.  Ohana spots a small magazine that rates hotels and hot spring inns via a mystery guest and is intrigued; Yuina notices this and explains that depending on how high of a score the hotel or inn gets, they typically will see an  increase in customers.  She then goes on to say that the town where they live will be covered by the magazine next.  Excited by this possibility, Ohana heads back to the inn and wonders how they can possibly be placed into the magazine.  Meanwhile, Enishi is busy shredding some coupons that Takako talked him into making (according to the translation, they were for two free meals with a one-night stay) and Tomoe was telling him that he shouldn’t bother listening to what Takako tells him to do since it never helps their business.  Enishi finally notices Tomoe sitting in the office and asks her what she’s doing.  Her reply is nothing because even though it’s the weekend, they only have one couple staying.  This depresses Enishi even more, but suddenly the phone rings and it’s a family wishing to book a weekend at the hotel.  Thrilled, Enishi books them a room but then is shocked that phones continue ringing off the hook!

After all of the phone calls have been taken care of, a total of twenty guests had booked a weekend at their hotel and at first, Ohana’s grandmother tells Enishi that he should learn to turn away customers, especially since they’re short-staffed.  But then she smiles and says that she’ll pitch in so that they don’t have to call Nako back on her day off.  Meanwhile, Ohana bumps into Minko – who is returning from a trip into town for groceries – and asks why Tohru isn’t doing the shopping like normal.  Minko explains that Tohru has the day off to attend a wedding in the city and they suddenly got a large amount of customers booking a hotel room.  Ohana helps her carry the goods back to the hotel and exclaims that Minko will be able to help out Ren in the kitchen and if she does a good enough job, Tohru will “fall even more in love with you!”  This embarrasses Minko and she hurries up the stairs, leaving Ohana to chase after her.  However, once the girls arrive at the inn, they notice Tomoe and Ohana’s grandmother huddled in a corner.  Minko rushes off to find Enishi and Ohana is at a loss of what to do before exclaiming that she’ll call an ambulance.  But before she can dial on her phone, her grandmother tells her not to because “what would the customers think?”  They ended up calling a taxi and Ohana went with her grandmother to the hospital while Enishi stayed behind to help run things (and of course, he calls Takako the first moment he can). 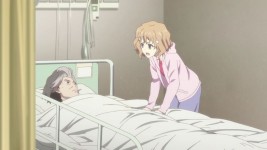 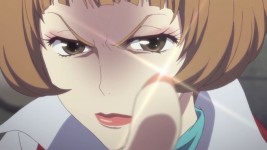 Once at the hospital, several tests are done on Ohana’s grandmother, but she needs to be kept overnight for observation and a few more tests in the morning.  They don’t say exactly what’s wrong with her, but it looks like she over worked herself and collapsed.  Ohana asks if she’s doing alright and her grandmother says that it’s nothing to worry about because these things happen when you get older.  She then tells Ohana to go back to the inn and help out since they’re short-staffed and they can’t leave the customers waiting.  This irritates Ohana, but she does as she’s told and heads out of the room.  On the ride back from the hospital, Ohana tries calling her mother to let her know what’s going on, but her mom doesn’t answer her phone.  She then grows a bit depressed and starts wondering what Ko is doing and if he’s well.  As if on cue, Ko calls her cell phone and she hastily answers the phone.  They talk for a minute before Ko tells her that he’s on a train on his way to visit her at the inn.  Ohana doesn’t appear to hear what he says, but when he tries repeating himself, the train goes through a tunnel and he loses his cell phone’s signal.  Unsure of what to do, Ohana turns off her cell phone and starts getting ready for work when Tomoe appears and tells her to come with her to the office for a quick meeting.  Once there, Takako is there and with all of her mighty skills of engrish, she tells them that they’ve scoped out the guests and have an idea as to who the mystery guests are.  She then informs them that they’ll be giving these guests better service than the others so that if they are the mystery guests the inn will get a good rating.  Ohana doesn’t agree with this, but she’s overruled and is forced to go with the flow.

Takako then tells Ohana to take her to the kitchen and Ohana escorts her there.  Takako then informs Ren (rather rudely I might add) that he’s to prepare an amazing meal for the two potential mystery guests.  This puts immense pressure on Ren, who apparently doesn’t function well under pressure, and Minko is worried that the meals won’t be done for all of the guests.  Takako tells them that they’ll just have to make meals for the two potential mystery guests and leave the other families for later.  This doesn’t sit well with Ohana at all and she stomps off to go take out the trash.  Here, she runs into Beanman and he tells her that he’ll take care of the trash for her after she mentions something about her grandmother saying that her account book was in her room.  She runs off and finds the book and flips through it, noting how detailed her grandmother is about every guest before storming into the office and basically telling Takako to shove her ideas up her ass.  Turns out, she called Nako and asked her to come in to work because it was an emergency and Nako seems really happy that Ohana felt like she could call upon her in a time of need.  Ohana then borrows Nako’s bike and goes down to the train station and takes a train into the city with the intent of dragging Tohru back to the inn to help out.  On the way there, she turns her phone on and notices she has five missed calls, all from Ko.  She mentally apologizes to him as she gets off the train and heads in the direction of the hotel the wedding was being held in.  However, once she gets there, she realizes she doesn’t know what room it’s in and decides to check all of them until she finds him.  As she cracks one door open, her eyes widen and the episode ends. 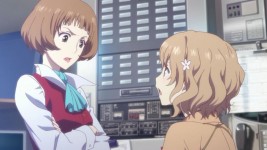 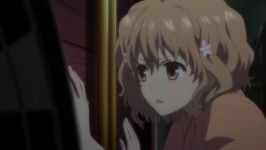 Opinions: This one was an adrenaline filled episode!  Lots of drama in terms of Ohana’s grandmother being hospitalized and Ko coming to visit but Ohana basically running the inn in her grandmother’s absence.  I’m so pleased with Ohana taking charge like that and tell Takako to shove it (the woman totally deserves it) and then taking the initiative to drag Tohru back to help out.  She’s really grown as a person throughout the last eight episodes and I’m definitely excited to see how she’ll continue to grow and mature.  Although what did Ohana see at the end of the episode?  I hope it’s not Tohru getting married! D:  And I hope that Ko and Ohana get to see each other and Ko understands Ohana’s responsibilities.