Admittedly, when we read the synopsis for this show, we were a bit wary.  Since the premise was about a young boy and girl entering puberty and dealing with their sexual identities and transgender ideals, it could have been a hit or miss show.  Thankfully, it turned out to be an amazing show, despite it being a sleeper hit of sorts. 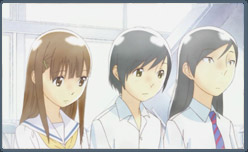 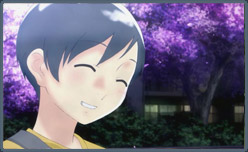 Wandering Son is the story of Shuichi Nitori, a boy entering his first year of middle school who has a love for dressing as the opposite sex.  This hobby of his is encouraged by his friends on account of how “cute” he is, which makes it difficult for Shuichi to handle the changes of his body upon entering puberty.  Opposite Shuichi is Takatsuki, a young girl the same age as Shuichi who wishes she could trade places with Shuichi and become a boy.  While it is not clear as to why she wants to be a boy, it’s likely due to the fact that she’s taller than most of her classmates and is teased for it.  However, the plot isn’t just about these two wishing to become the opposite sex.  It’s about friendship and the trials that friends endure together during such a challenging time of their lives, as well as dealing with romantic feelings for your friends.  The way that they were able to address the issues of transgender and puberty was done so well that unless you really paid attention or knew beforehand what it was about, you couldn’t even tell that’s what they were talking about.  To the naked eye, it almost appeared as though you were simply watching someone mature and grow and struggle to deal with the changes of their body.  Overall, it’s an extremely touching story that most people have gone through at one time or another and something everyone can relate to.

Once you’re drawn in by the story, you’re blown away by the artwork and animation.  The entire show, from the background to the characters, look like an animated water color painting.  All of the motions are fluid and captivating and the colors are chosen with care.  The balance between harsh blacks and browns and light pinks and blues was done extremely well and if anything, made us want to sit there, staring at the screen in awe.  It is by far one of the prettiest shows of the season, although it’s not in your typical flashy way.  Even the wardrobe in the show was evidently designed with care for each character, ranging from Takatsuki’s more tomboyish appearance and Shuichi’s more feminine choices in colors, despite the plain design of his clothes. 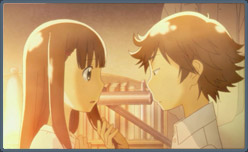 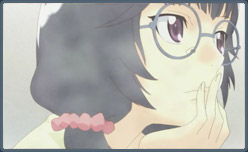 The personalities of the characters were really brought forward in an amazing way as well.  Shuichi, usually more demure and quiet, was complimented nicely by Takatsuki’s outspoken nature.  However, throughout the series, you watch as Shuichi begins growing a backbone and speaking up for himself while Takatsuki begins to try and take other people’s feelings into consideration before saying something she might regret.  Even their friends were brought to life through their personalities.  Makoto, usually unsure of himself and more of a follower than a leader, becomes more sure of himself as the show goes on and begins speaking his mind in regards to his jealousy of the attention Shuichi gets wherever he goes.  Chizuru appears to be a wild, out-going girl who goes with the flow, but is revealed to be a very thoughtful, even somewhat serious individual who weighs her options carefully before making a decision.  Everyone in the cast has their flaws and those flaws are addressed at one point or another throughout the series, though the character usually ends up learning from their mistakes and seeing how their flaws can affect their friends.  Even Shuichi’s sister Maho, who seems to be aggravated most of the time and harsh to her younger brother (even appearing to be jealous of the attention he gets) learns that she should really be nicer to him and admits late in the series that she does worry about him, but it’s hard for her to express her feelings sometimes.

To further compliment the characterization, the voice actors were superb with their portrayals of the characters and their insecurities.  Each voice actor breathed life into their 2-dimensional counterpart and really brought the emotions home for us.  There were times where the way they said something caused us to tear up and others to begin getting angry with a character for saying something so hurtful.  In all honesty, there is nothing that we would change about the voice actors or their portrayals.

Lastly, there’s the soundtrack.  Though it was simple and not over-done in terms of music, it was a lovely OST.  From the instrumental music that really brought home the point the animators were trying to get across or the emotions that a character was feeling in a particular scene to the opening and ending themes that reminded us of our child-like innocence, it was amazing.  Definitely one that we need to download and listen to over and over again. 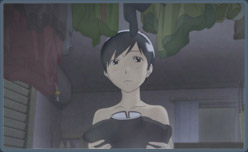 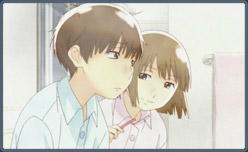 Overall, Wandering Son was an excellent show, though not quite as popular as it could have been.  Perhaps it was the animation style or the premise of the show that turned some viewers off, but all we can say is that we’re ecstatic that we gave it a chance.  It’s not an overly happy show, but not an overly serious show either.  There’s a lovely balance of happy and sad moments and even turmoil and regret when dealing with their first romantic relationships and their friends.  If you’re looking for a show with a lot of heart and soul, as well as gorgeous artwork and amazing voice acting work, we highly suggest Wandering Son.  Because of that reason, we’re giving it a well deserved A grade.