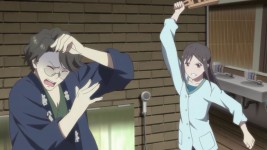 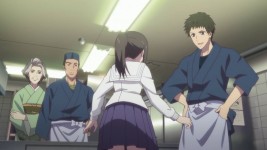 After last week, I was a bit concerned as to how things would turn out between Minko and Ohana considering the drama with Tohru.  Let’s just say that there was a lot of unnecessary drama and a few misunderstandings.  The episode kicks off where last week’s ended: Minko and Ohana saw Tohru as the rival inn, picking up Yuina – the heir to the inn – who was riding on the back of his motorcycle.  After returning to the inn, Minko is busy dressing in her uniform for work and tries to ignore the confusing emotions she’s feeling.  Meanwhile, Ohana is shuffling alongside the inn, thinking that she had just stumbled across a love triangle when she runs into Minko as she enters the side entrance.  She tries to comfort Minko, but it backfires and Minko shouts at her, telling her not to say another word or to even breathe (Ohana falls to the floor and comments that she’ll die if she doesn’t breathe).  As Minko storms off towards the kitchen, Nako and Tomoe arrive and begin demanding details of what happened that morning.  Later, as the three girls are cleaning the baths – along with Jiro’s assistance – Ohana tells them what happened and Tomoe and Nako are shocked.  They try to figure out what Tohru was doing at their rival inn and Jiro pipes up, saying that it’s likely that he’s accepted a position as a chef there.  Tomoe is outraged, but Jiro continues explaining his theory; Tohru and Yuina became close and are perhaps dating, which resulted in Tohru’s job offer there in addition to his obvious talent as a chef.

Unfortunately for Jiro, Minko happened to be passing by on her way back from retrieving a grater for Ren (she cut her finger while dicing some vegetables, so he shooed her out of the kitchen).  She storms into the bath and is about to attack Jiro with the grater when Nako shouts at her, begging her to control her temper.  Minko doesn’t hit Jiro, but does manage to get out that Tohru would never take a job offer at the other inn because even though he doesn’t always show it, he cares about everyone there and about his job.  Tomoe whispers something to Minko, but Minko doesn’t say anything and returns to the kitchen.  Later that day, Ohana and Tomoe are bringing the small tables to the dining hall to prepare for the guest’s breakfast when Tomoe tells Ohana to go check on Minko since she’s worried about her.  Ohana agrees and hurries off to the room she shares with Minko.  Meanwhile, Minko is dressing her wound and reminiscing about how she came to work at Kissuiso in the first place.  As it turns out, she had wanted to become a chef without graduating high school, but her parents were against it, so she went looking for places where she could become an apprentice.  At first, Ren and Ohana’s grandmother are skeptical, but Tohru hands Minko a knife and asks her to show them what level her skills are at.  Minko is ecstatic and does her best to fillet a fish, but Ren points out that she left too much meat on the bones and comments that she has a long way to go.  She seems down, but Tohru then interjects and asks Ren if he would be able to take Minko on as his apprentice and teach her all he knows.  Ren contemplates it for a minute before finally deciding that so long as Tohru takes responsibility for her, he’ll allow her to be a kitchen hand. 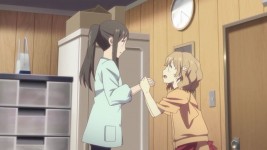 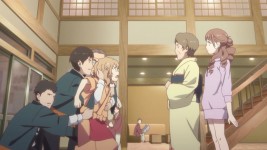 Ohana then comes into the room, interrupting Minko’s thoughts, and asks her if she’s doing okay.  Minko ignores her and tells her to go away, but Ohana continues to press the matter of Tohru possibly getting offered a job at the other inn.  This seems to hit a nerve and Minko simply says that it’d be a great honor for him and there’s no way he could turn it down since it would do amazing things for him in terms of a career.  But when Ohana asks her if she wants Tohru to take the job, Minko snaps at her and says no.  She then shoves Ohana out of the room and locks the door, leaving Ohana standing in the hallway, mulling over Minko’s answers.  Before Ohana can go to finish helping Tomoe set up breakfast, her uncle bumps into her and says that if she’s going to stand around and do nothing, she can come with him for a bit to help find the Bonbori lanterns.  The two sort through a few boxes in storage before Ohana stumbles across the lanterns.  She seems amazed at how pretty they are and her uncle explains that the people in the town write their wishes down on the cards before hanging up the lanterns and their wishes are granted by the Gods as they follow the lanterns home.  He then comments that only hard working people will get their wishes granted, but his snide remark seems to give Ohana an idea.  She runs off, lantern in hand, and returns to her room, surprising Minko with her sudden entrance.  Ohana then declares that Minko is to write her wish down on the lantern because she’s such a hard worker while she runs to the other inn to drag Tohru back.  Minko is about to say something, but Ohana runs off before she can say anything.

Ohana sprints to the rival inn and marches inside, demanding to see the manager.  Yuina and her grandmother go to see what all of the ruckus is about and Ohana demands that they give Tohru back.  Yuina and her grandmother are perplexed and Ohana carries on, saying that they already have a successful inn and a beautiful granddaughter, so they have no right to take away Tohru from Kissuiso.  Yuina laughs before explaining that they were never intending to “steal” Tohru from Kissuiso.  As it turns out, he was covering for a line cook there that was out sick with a cold.  Ohana’s spirits drop and she weakly asks if Yuina and Tohru are dating and Yuina laughs again, saying no.  Ohana says that she saw the two of them riding on Tohru’s bike and Yuina explains that she had always wanted to ride on one and Tohru was just giving her a ride.  Satisfied with Yuina’s explanation, Ohana trudges back to Kissuiso, exhausted.  Once she gets back, she runs into Tohru, who is heading home for the night.  He teases Ohana, who becomes defensive, but he ends up thanking her for caring enough to try and drag him back although there was no reason for her to do that.  After he leaves, Minko and Nako ask Ohana to take a walk with them.  As they’re walking up the path, Minko thrusts the wish card into Ohana’s hand, saying that she should write down a nickname for Minko to call her (she also says that Ohana can call her “Minchi” if she wants).  Unfortunately, Ohana takes too long and Minko revokes the opportunity, leaving Ohana grief-stricken.  Later, Ohana finally decides on a good message to send Ko and although he doesn’t get it right away, we do see that he’s fallen asleep while looking at travel magazines for the area that Ohana moved to. 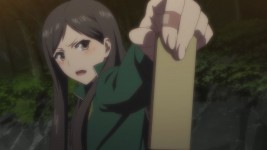 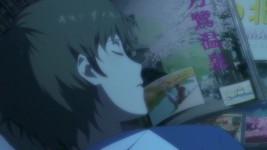 Opinions: Oh, the drama~  I really loved this episode because not only did we find out why Minko is staying at the inn and working as an apprentice, we also got to delve deeper into her character and find out why she likes Tohru so much.  The fact that Tohru is the reason she was even given a chance in the first place was endearing and now I don’t think so poorly of him.  The little moment between Minko and Ohana when Ohana was given permission to call Minko “Minchi” was adorable, although I would have a hard time thinking of a nickname for myself too.  Poor Ohana.  But overall, I’m so happy that the girls are starting to finally get along and I think a friendship is about to blossom.  The ending where we saw Ko looking at the travel magazines was cute and I’m secretly hoping that this means he’s planning on taking a trip out to see Ohana.