The World God Only Knows II 03 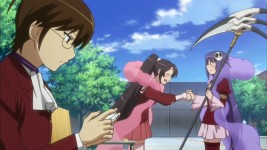 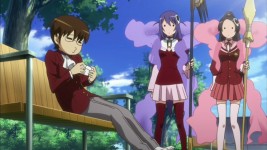 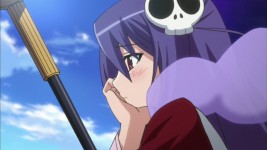 This episode wasn’t entirely what I was expecting, but I’m kind of glad it didn’t happen like what I wanted.  For those of you who have forgotten, at the end of last week’s episode, Elcie was captured in a detainment jar usually used for loose souls.  As it turns out, the jar belongs to her old classmate and friend Haqua, whom Elcie is thrilled to see.  Haqua seems happy to see her again as it’s not common to run into another demon in the human realm, but soon starts lecturing Elcie about getting in the way and throws the jar down to the ground.  Thankfully Elcie is unscathed, both by the fall and from Haqua’s sharp tongue, and bounces up to talk to her friend.  Elcie notices that Haqua has a rainment like she does and asks if she’s part of the Loose Souls Division too.  Haqua laughs before pointing to her bracer and proudly stating that she’s a section chief and not a grunt like Elcie.  This impresses Elcie and she chirps on about how cool Haqua is and how happy she is that Haqua is advancing as quickly as she is.  Elcie then decides to introduce Haqua to Keima (of course, she still calls him Kami-sama, which confuses Haqua) but Keima is too busy trying to get good reception on his PFP in order to receive a special event for his game.  Haqua finds the whole situation laughable because Keima is “a mere human” and “how is he supposed to be of any help?”  However, the conversation quickly turns to how many souls the girls have caught and when Elcie says that she’s caught five, Haqua starts laughing hysterically again.  She pats Elcie on the head saying that she doesn’t have to lie and that it’s okay if she hasn’t caught any souls yet.  Elcie seems a little downtrodden, so she asks how many souls Haqua has captured.  This seems to catch the other girl off guard and she fumbles for an answer before saying she’s caught ten so far.  Elcie is amazed and begins congratulating Haqua on her achievement when her radar begins beeping with a message from Hell.

It turns out that someone let a loose soul escape after they had it cornered and it was flying towards Elcie’s location.  Her superior gave her orders to find and capture it before it becomes too large and is able to feed on negativity from humans or surroundings and increase it’s power further.  Elcie is just about to speed off when Haqua tells her to leave it be and she’ll go after it since, after all, she’s the section chief and Elcie’s just a grunt.  Elcie then turns to Keima for advice on what she should do after Haqua flies off in search of the soul, but Keima exclaims that he’s not leaving any place that doesn’t have a three-bar wireless reception because he has another event coming up in a half hour (how he’s able to get away with doing this stuff at school still baffles me).  Upset at his lack of assistance, Elcie runs off crying in search of the loose soul herself.  Later that day, Haqua is wandering around the school, completely lost because of the size of the campus, and feeling a bit dejected that she hasn’t been able to find the soul yet.  She arrives at a balcony and sighs, saying that she wished she could have been assigned to Europe since she was born in the west originally.  Keima spots her and tells her that he’ll offer his assistance with finding the loose soul since he’s familiar with the campus.  At first Haqua is reluctant to accept his help since he’s a human and she’s a high-level demon, but Keima then brings up the point that she was the one who let the soul go in the first place.  Haqua tries to deny it at first, but Keima then deducts that she was already chasing it when she ran into Elcie and in order to save face, she tried to make it seem like she just happened to be in the area.  Just as Haqua is about to say something (more than likely deny Keima’s accusations), Elcie comes rocketing out of nowhere, landing on Keima in a crash-landing.  Haqua scolds her, saying that even after all of the tips she’s given Elcie on how to land, she still manages to mess it up.  Elcie is about to apologize, but Keima then whispers to her saying that he has some secret intel on the “perfect student”.  It’s at this point that Haqua decides to take his offer for help and essentially kicks Elcie off of the balcony. 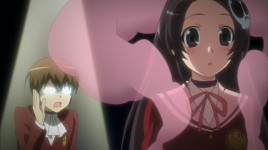 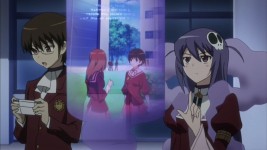 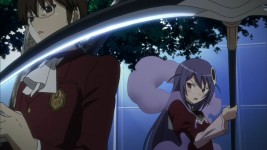 As Keima and Haqua walk around school trying to locate the loose soul, Keima shows her the courtyard, which is usually full of students and suggests that they wait for class to get out.  Haqua says it’s not necessary and pulls out her rainment and uses it as a surveillance camera to look back at the students who passed through the courtyard just a half hour earlier.  Keima comments that Elcie can’t do that and Haqua says it’s because it’s a high-level ability and Elcie can’t handle it yet.  Keima says something that pisses Haqua off and she says that she’ll kill him right after they get the loose soul captured, but Keima laughs, saying that she can’t kill him.  She asks why and he explains that if she kills him, she’ll kill Elcie and she doesn’t seem like the type of person to kill a friend.  Haqua says that she isn’t Elcie’s friend, but Keima points out that people don’t give pointers for things like flying or anything else if they aren’t friends with that person.  Haqua reluctantly agrees that maybe – just maybe – she is friends with Elcie.  The duo then starts wandering around the school seeing as Haqua wasn’t able to find a trail for the loose soul.  Towards the end of the day, they return to Keima’s classroom feeling defeated.  As Keima marks off every place they’ve checked in the school, Haqua mutters something about needing to find the soul soon otherwise something bad will happen.  Keima comments that he doesn’t think there’s much a soul can do since they’re only the souls of evil humans, but Haqua corrects him, saying they aren’t human souls, but the souls of evil demons.

She goes on to explain that over a millennium ago, Hell used to foster pure evil and hatred and those evil demons ruled Hell until the more rational demons – like herself and Elcie – were able to contain those evil demons and restore order.  However, these souls found a way to escape and since they are without bodies they are able to use a host in order to feed on negativity to regain their strength.  Keima interrupts her, using balloons and a body pillow to illustrate his knowledge of what happens, but Haqua says that isn’t everything.  If the soul is able to obtain enough of it’s strength back, it will regain it’s body in the form of his/her host’s offspring.  This seems to cause Keima to become a bit alarmed, although he masks his concern quite well, and suggests that they start looking at places and people with large amounts of negativity.  They start off with the school’s baseball team (Haqua says they just suck), the gang that tried to beat up Keima a few days before (Haqua says they’re just negative to begin with) and a few other places before Keima decides to check out the school theater.  His reasoning is that there’s a lot of negative energy around it and quite a few ghosts.  Haqua laughs at the notion of ghosts, but hesitantly goes inside.  Her radar begins going off and Keima is about to make his leave when she begs him to stay with her.  He tells her that he’s a human and there’s not a lot he can do to help, and Haqua confesses that she hasn’t captured a single loose soul and is scared.  However, her radio goes off with Elcie shouting for her help in in the theater because all of the students have collapsed and she’s not sure what to do.  As Haqua is about to approach the doors leading to the theater, we see Elcie confronting a large, glowing blob with a pretty gross looking face hovering in the air. 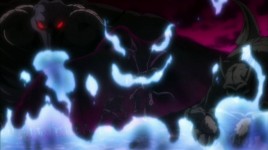 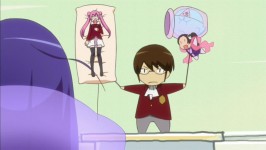 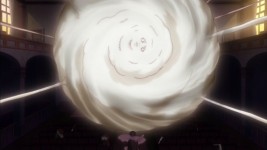 Opinions: So we finally find out that Elcie is actually quite capable in the field, despite everyone saying otherwise.  I knew it!  No one messes with my Elcie!  Especially you, Haqua!  At first I didn’t like Haqua; I thought she was arrogant, abrasive and just a bitch.  Although she did start to grow on me throughout the episode and I’m glad that she’s nowhere near as bitchy or arrogant as I initially thought she was.  I’d have to imagine that it does suck to be shown up by one of your friends who is also a lower rank than you, but that still doesn’t excuse her behavior towards Elcie.  Learning about the souls actually being the souls of evil demons was surprising, but now it makes a lot more sense as to why they need to capture them.  Although I’m concerned about how they are going to capture this new, more powerful soul since Haqua basically has no experience in the field.  It will definitely be interesting to see how this one pans out.