If there is one strength and flaw to Ao no Exorcist, its that the series is really thorough. Its the second episode, and by the end of it, the series has actually just set up the status quo for itself. Very few series take two episodes to establish the basic crux, but Ao no Exorcist does a pretty good job of it.

This episode we get to see some real inner turmoil in Rin, as he chooses to become a demon to save his dad. I particularly liked how the episode showed various flash backs to Rin’s childhood, where he was obviously singled out because of his demon nature. It was really sad seeing the poor guy being picked on and hated and not really understanding why.

It was understandable, therefore, that Rin totally lost it when he found out that he WAS actually an actual son of a demon. It was something he had denied so intensely, but reality really spat in his face. I expected Fujimoto to die as the loving father, protecting his son right after his son had just rejected him as a father. It’s a common cliche, but Ao no Exorcist put just enough of a variation to make the scene stand out.

First, Rin came back, and helped take out the demon that was overpowering the exorcists. Of course, things turned for the intense worse when this happened: 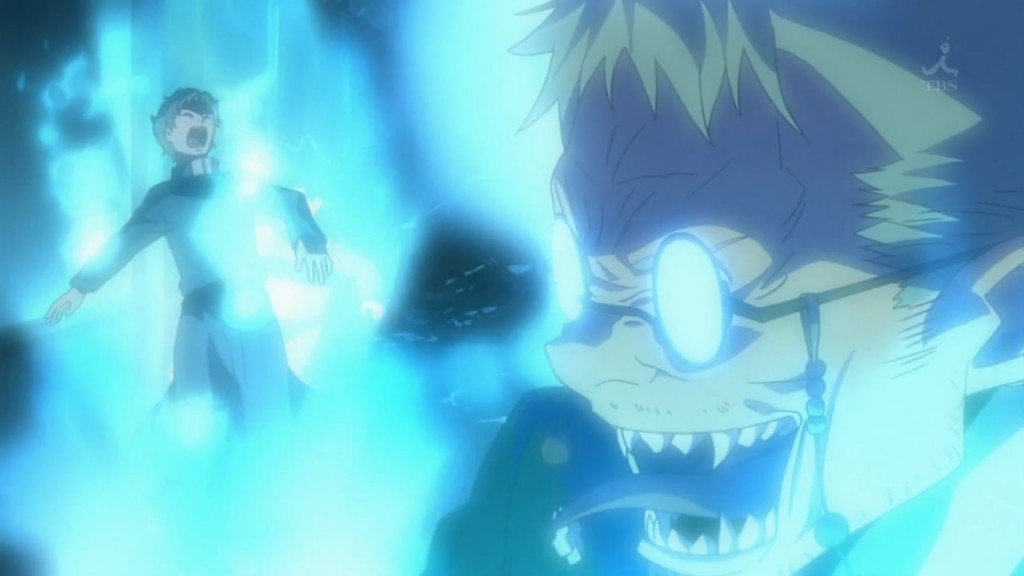 Satan possessed Fujimoto, probably because of his anger at what Rin had said to him. In that one moment of weakness, everything went to hell. Satan tried to drag Rin back into the realm of Ghenma. It was THEN that we had Fujimoto die, killing himself to stop Satan. That was a pretty epic death, for a cool character that had scarcely two episodes to shine before he exited.

What came next though, was definitely much much more epic: 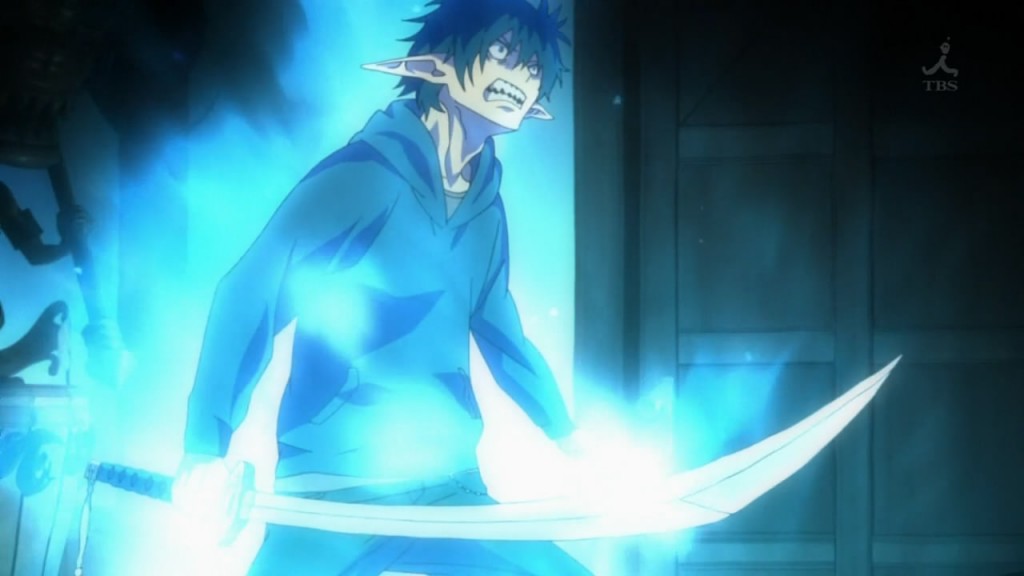 I GET LONG EARS WHEN I’M ANGRY!

When Rin chose to abandon his humanity, the thing he held most dear to himself, for his dad, it was a powerful moment. It was alll the more tragic that his dad ended up dying anyway. It was very Rin-like though, sacrificing himself for everyone else. It shows that despite how tough, rash and angry this guy can get, he still has a heart of gold. That’s what makes him a likeable anti-hero I guess XD

I did feel like the last part of the episode, which was quite a big and important part of the series, was kind of rushed in comparison. I really did feel like they shouldn’t just shifted it to the next episode and given it its proper due time. Of course, if they HAD done that, we would’ve really had very little content in this episode.

I did feel a bit sad at how little happened in this episode, and it really did feel like it was over a bit too quickly. I guess that’s a testament to how intense and well done the episode was. I was, again, quite impressed with the animation.

The voice acting, though, really stole the show. There was some superb voice acting, from Rin’s seiyuu Nobuhiko Okamoto and definitely some amazing voice acting by Hiroshi Kamiya as Mephisto Pheles (people will remember him as Orihara Izaya from Durarara!!). Not just these two, but nearly everyone out did themselves.

With great production values, amazing voice acting, some epic music, the only real flaw was that the pace for the series seems to be a bit slow. Given that this is probably going to be no more than 24 episodes, hopefully the pace picks up after this.

Holy wow is the soundtrack for this series epic. First an ED theme by 2 PM and now an OP by UVERworld? NIIIIICE!!!!!

I definitely liked the OP, although I will admit that its not the best UVERworld song I’ve ever heard. Its pretty good though, and lends itself well. I do have to say that the animation for the OP was kinda lackluster, as I could definitely see some more epic looking animation for the OP. Given how high the bar is for the  animation in the actual episodes though, I can understand if they wanted to skimp out on the OP though.

All in all, a pretty awesome OP theme. If there’s one thing, its that Ao no Exorcist has a darn kickass Music Director! XD

Rin’s journey begins… at school? And what’s this? His brother is definitely not happy with him. Things are gonna get interesting next week! XD