The World God Only Knows II 02 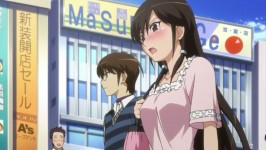 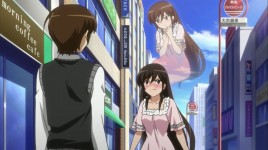 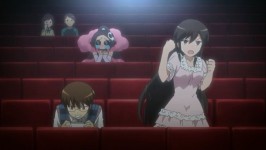 After last week’s crazy episode, I was skeptical as to how Keima would get tough-girl Kasuga to show her feminine side enough for him to conquer the loose soul inside of her.  Apparently Keima is a lot more crafty than I thought he was.  This week’s episode picks up where we left off last week: Keima and Kasuga are on a date while Elcie follows them to make sure they pick out some of the “weakest” things to do for the day.  Kasuga is unnerved by the amount of attention she’s getting from men as they walk down the street and Keima, as always, is oblivious to her discomfort.  When Kasuga comments that she should have worn pants or at the very least a longer skirt, Keima tells her that the whole point of the day is to do things she considers “weak” to entice the other Kasuga out of her.  She relents and Keima then takes her to the only store he knows – the video game store.  Here, he finds a game he’s been looking for for months and is thrilled that they have one copy left.  Unfortunately, Kasuga ruins his moment by asking him what kind of weakling goes to a video game store (he comments that it’s the only store he knows).  Keima then tells Kasuga that she gets to pick where they go next.

Somehow I wasn’t surprised when Kasuga went straight for the martial arts store and starts stocking up on athletic tape (there’s a 40% sale!).  Elcie chimes in, saying that it’s not exactly the most romantic date she’s ever seen and Keima snaps at her, telling her that she should have given him ideas if she was going to patronize him.  Elcie then decides that they should go see a movie, so she picks out the most sappy movie possible and while she enjoys the movie, Keima is playing his new game the whole time while Kasuga shouts at the screen, telling the hero to man up.  After the movie, Kasuga comments that the date isn’t working because they haven’t connected at all.  Keima asks if she would like him to hold her hand, which causes her to scream at him but also causes her second self to appear.  After another failed attempt to capture her, Kasuga tells Keima that she meant they haven’t connected on an emotional level.  Keima tries thinking of a way to combine his love of games and Kasuga’s hatred of anything weak and decides that the arcade would be the best idea.  He shows Kasuga a whack-a-mole esque game (this one has cute little lobsters though) and Kasuga actually seems excited to try it out.  She really seems to enjoy herself and is proud when she gets the high score.  Turning to show Keima that she got the high score, she’s furious that he got a higher score than her and tries again, this time with a bit more vigor. 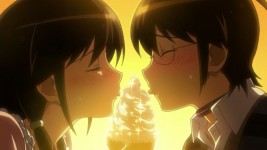 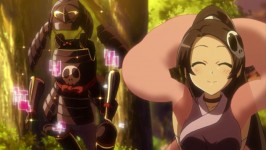 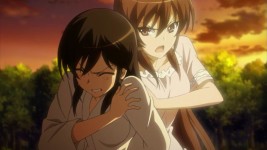 After leaving the arcade, the duo heads to the park to try and figure out how they can entice this other side of Kasuga.  Suddenly, Kasuga spots a couple on the other side of the park sharing an ice cream cone and becomes incredibly flustered, but declares that she and Keima should try that since it seems like it will definitely work.  Returning with the ice cream cone, the two become incredibly bashful and unsure of themselves, but eventually share the ice cream.  This seems to do the trick, as Kasuga’s other self fully materializes.  Out of nowhere, Kasuga dons a karate gi and takes a fighting stance, as does her other self.  It turns out, her other self simply wants to devote her life to being a woman instead of fightng like Kasuga has.  She reflects on how she was forced to hide her true feelings towards being a woman since her father expected her to take over the dojo and how angry she is about it.  As the two fight, Keima and Elcie look on in wonder.  Elcie suggests that Keima jump in and help, but Keima laughs, saying that he doesn’t want to die.  Suddenly struck with an idea, Elcie makes Keima a suit of armor that will protect him from even a bomb going off (probably) but Keima tells her he’s not wearing anything and there’s no way in hell he’s going to jump into the fight.

Unfortunately, it seems as though Kasuga’s love for all things cute and fluffy is stronger than she is and she is overpowered by her other self.  As she is thrown across the park, Keima finally runs to her aid and places a rather pretty flower in her hair.  He asks why she can’t be both strong and womanly, but this only irritates Kasuga and her other self.  They tell him that you can’t devote your life to two things because to devote means to sacrifice something else.  Keima seems to understand that, but tells them that there can always be a way to be strong and run the family dojo without giving up on her fondness for cats or cute things.  He eventually compares Kasuga to a cat (cute to look at, but a stealthy predator) and he gets shouted at for the analogy.  He then gestures to Elcie (who is wearing the suit of armor she made) and as she jumps down from the jungle gym, she creates a rather large crater in the ground, illustrating Keima’s point.  At this point, Kasuga’s other half decides to give in and tells Kasuga to let her know when she’s ready to devote her life to being a woman.  Hopping back inside Kasuga, she asks the girl for one last favor and takes over her body in order to embrace Keima.  Kasuga is embarrassed, but eventually kisses Keima, releasing the loose soul.

The next day, Keima and Elcie are watching Kasuga in the school’s dojo and are happy to see that Kasuga has embraced her fondness for cats, but is still devoted to the lifestyle of a warrior.  Later, as the duo are sitting on a bench in the school’s courtyard, Elcie goes to pull out her handbook but realizes that she brought a cookbook with her instead.  However, before her despair can take hold of her, her hairpin goes off for a moment before shutting back off.  Suddenly, Elcie is whisked into the air and caught in a jar, just like the ones she uses to capture loose souls.  She’s scared at first, but soon sees the face of who captured her and becomes relieved. 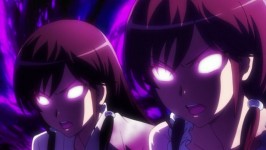 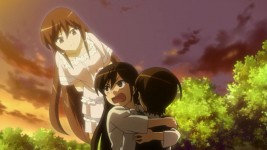 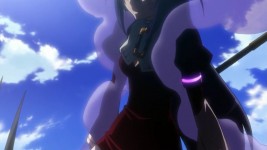 Opinions: This was a rather cute way to end the first round of conquests for Keima.  I’m glad that Kasuga finally came to terms with her fondness for cute things, but isn’t letting it effect her devotion to martial arts.  All of the moments between her and Keima were adorable and it was so much fun seeing such a strong-willed woman become so flustered.  Although now I’m confused as to who this lady that captured Elcie is.  Is she her sister or another member of the loose souls team?