Ao no Exorcist is definitely a  weird blend of some very interesting elements. For one thing, it has gorgeous art, tried and true character designs, epic voice acting, smooth and silky animation and an interesting but slow starting story. While the story was a bit slow for the opening episode, the awesome visuals and amazing voice acting definitely kept me interested till the end, when things definitely started getting good.

I think the primary thing that has me impressed with Ao no Exorcist is its main character. Rin is a very interesting guy, he’s honest, has his heart in the right place, is a bit rash and has a bit of Tsundere in him for good measure. If anything, the chief purpose of the first episode was clearly to show the depth in its main character, and Rin is definitely a deep and interesting character.

His character design kinda reminds me of Hibari Kyoya from Hitman Reborn, but the art style is actually very… BONES-ish. Particularly the art style seemed like a mesh between Full Metal Alchemist Brotherhood and Darker THAN Black, both obviously BONES series. Imagine my surprise when I found out that this was actually done by A-1 Pictures, and the fact that it was done so well.

The story itself was definitely interesting. I felt bad for Rin, as the guy clearly tried his best to fit in and do well, and obviously failed and stumbled at the very last moment. In contrast, I found his brother to be quite an arrogant, annoying jerk, that seems to act all nice on the outside, but is very… Arrogant and annoying on the inside.

I found it particularly galling when said brother was scolding his brother for losing a job that he obviously hadn’t wanted to lose to begin with. From the PVs, its kinda obvious that the twin, sibling relationship is actually going to play a huge part in the series. Its an interesting dynamic, and I definitely like Rin better than Yukio for sure.

The other major character I’d like to stress on is obviously Rin and Yukio’s father. The guy really reminded me of Hughes from FMA and yet at the same time, he also reminded me of Keisei from Corpse Princess. Interesting guy, but I have a feeling that much like Hughes or Keisei, he isn’t going to be sticking around for too long.

I do have to admit, despite the low key first episode, there were some moments that really got your blood pumping. I was really cheering on Rin at the interview of his, hoping he’d succeed. It was epic when he actually got it too, after being able to cook and get the store going. It was all the more sad when he actually lost said job as well.

The highlight though, was this scene: 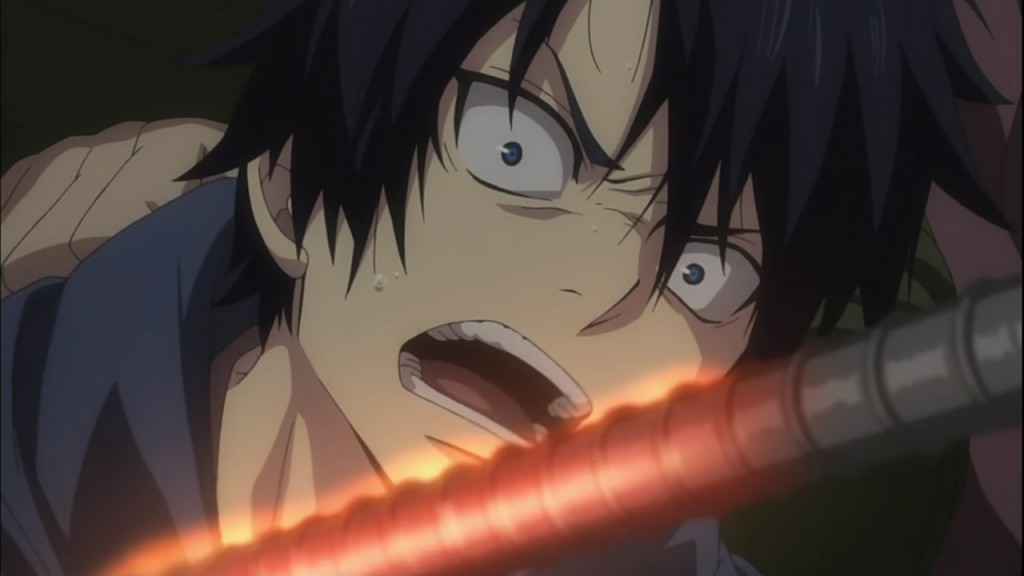 I cringed when I saw this part, as the very idea of the hot metal pipe coming near Rin was just… argh! Thankfully, Rin’s was left fairly unscathed as his own blue flame power activated. Of course, what happened afterward was even more awesome. Rin’s dad comes in, easily takes out the demon and sends him PACKING!

And then… the revelation that followed was just as intense.So Rin is the son of Satan eh? Why is he with his human father then? How is he Yukio’s twin? Is Yukio also a demon child? SO MANY QUESTIONS! This, my friends, is the mark of a good first episode. I’m definitely very impressed and am looking forward to what comes next!

The ending theme for this, performed by Korean band 2PM was a nice, cool and cheery ending theme to what is obviously a very interesting series. I was surprised with the animation, which clearly reminded me of the second Darker Than BLACK season 1 opening. There are waay too many parrallels to that show, I’m sure the director or someone related has probably worked on both shows XD

Either way, very nice and sweet ED theme. I’m wonder how the OP will fare in comparison next week!

We get a look at this world’s Satan, and see the Demon that Rin’s dad took on again? All of that and probably more, next week!